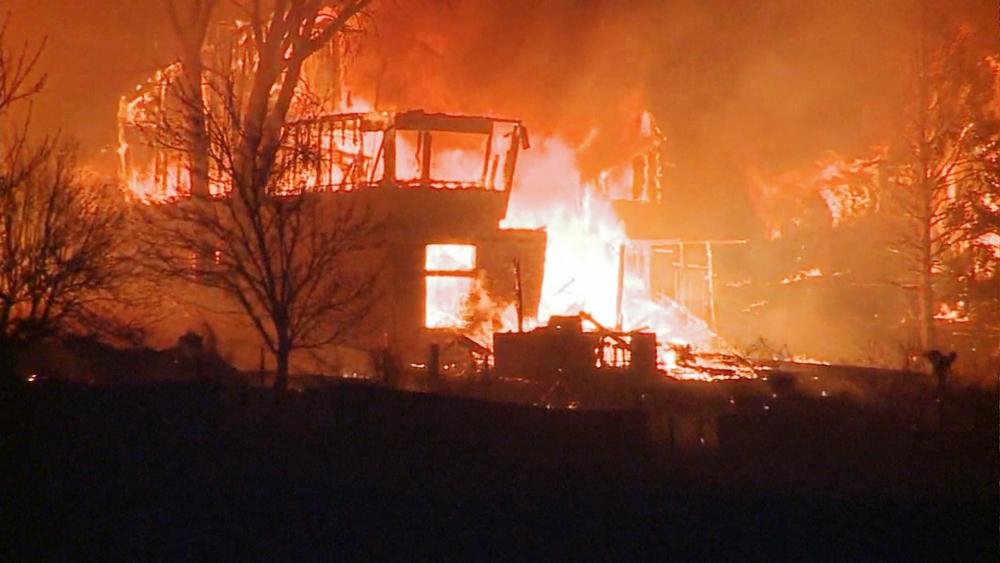 Fast-moving fires in Colorado, just northwest of Denver, have forced thousands to evacuate from their homes. Nearly 600 homes have already been devoured by the inferno which has been fueled by hurricane-force winds.

Authorities believe downed power lines may have sparked some of the blazes but also say intense weather has fueled the disaster. Colorado has experienced an extremely dry and mild fall and winter, and on Thursday strong winds quickly fanned the flames.

"Gusts of 100, 110 miles an hour can and have moved this fire down a football field in a matter of seconds," said Gov. Jared Polis (D-CO). "Very little time to get out."

In Louisville and Superior, tens of thousands of residents have been ordered to evacuate. The neighboring towns are roughly 20 miles northwest of Denver.

Polis said the fires' proximity to neighborhoods and businesses has made the situation perilous. "Sixteen-hundred acres near a population center can be and is, in this case, absolutely devastating," he said Thursday.

Polis has declared a state of emergency to allow the state to access federal disaster funds.

So far, only a few injuries are reported but Boulder County sheriff Joe Pelle says the severity of the fires may lead to more serious injuries or deaths.

"I'd like to emphasize that due to the magnitude of the fire, intensity of this fire and its presence in such a heavily populated area, we would not be surprised if there are injuries or fatalities," he said.

The blazes are part of an ongoing problem out West in recent years: increasing drought and heat that lead to a spike in fires.

In Boulder County, 90 percent of the area is in severe or extreme drought with no substantial rainfall since mid-summer.

For now, authorities and residents are watching the wind, hoping it will subside so that deputy sheriffs and firefighters can begin to assess damage and search for possible victims.

They're also watching for snow. The National Weather Service predicts up to a foot could fall in Boulder this weekend and the moisture could help to wipe out the quick-moving fires.