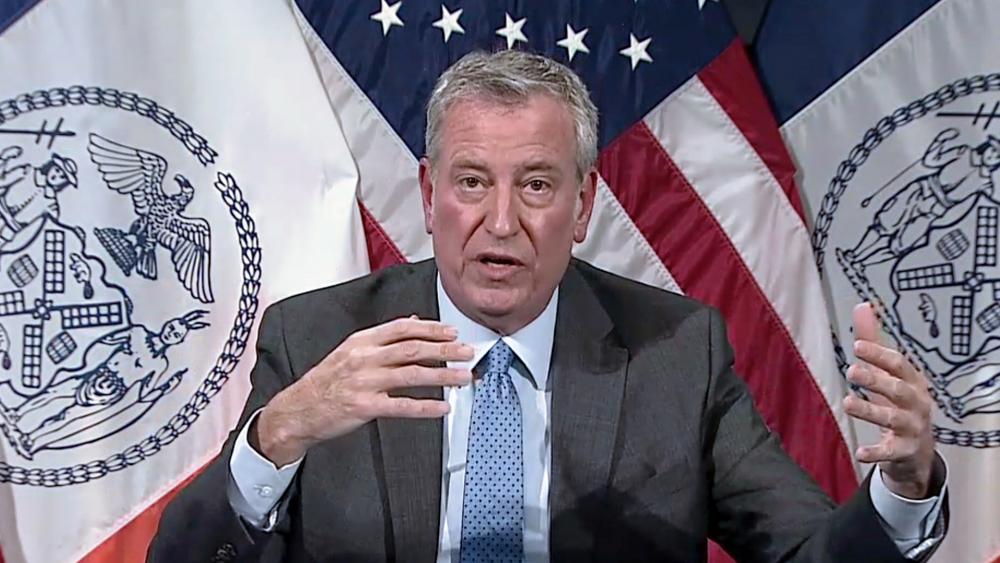 Even though federal courts have put President Joe Biden's federal private employer mandate on hold, New York's outgoing mayor has announced his own mandate for private employers, along with vaccine passports that even include children.

All private businesses in New York City must get their workers vaccinated against COVID-19, Bill de Blasio, the outgoing mayor announced Monday, imposing one of the most aggressive vaccine mandates in the nation.

The vaccine mandate for private businesses will take effect on Dec. 27.

The Democrat mayor, who only has a few weeks left in office, called the action a "preventive strike" against COVID-19 infections during the holiday season and the colder months.

“We in New York City have decided to use a preemptive strike to really do something bold to stop the further growth of COVID and the dangers it’s causing to all of us,” de Blasio said Monday on MSNBC's “Morning Joe.”

"We've got omicron as a new factor, we've got the colder weather, which is going to really create additional challenges with the delta variant, we've got holiday gatherings," he said.

BREAKING: NYC is strengthening vax screening at indoor public establishments like restaurants & theaters.
* Will include 5-11 yr olds (as of 12/14)
* Will require a 2nd shot, not just single shot (as of 12/27)

These are much needed measures in the face of our delta/omicron wave.

Vaccine mandates across states and cities vary widely, with some states resisting any mandates and others requiring the shots for government employees or certain sectors that run a particularly high risk, such as health care workers.

But most officials have not announced mandates reaching as far into the private sector, nor mandates covering so many people. It will apply to roughly 184,000 businesses in New York City, which has a population of 8.8 million.

As CBN News has reported, President Biden sought to impose a similar mandate nationally, applying to businesses with 100 or more workers, but federal courts have put that on hold ahead of a Jan. 4 deadline.

De Blasio said he expects his new mandate to survive any legal challenges.

Vaccinations in New York are already required for hospital and nursing home workers and for city employees, including teachers, police officers, and firefighters. A vaccination mandate for employees of private and religious schools was announced last week.

Current New York City COVID-19 rules also include at least one vaccine dose for indoor restaurant dining, entertainment venues, and fitness centers. Under new mandates for indoor dining, entertainment, and gyms, proof of vaccination of two shots will be required for people over 12 except for those who received the Johnson & Johnson jab which is a single-shot vaccine.

Starting Dec. 14, proof of one-shot will be required for children aged 5 to 11 to attend those venues, the mayor's office said in a statement.

In addition, children in the age group will also have to be vaccinated if they take part in "high-risk extracurricular activities," including sports, band, orchestra, and dance.

Danielle Filson, De Blasio's press secretary also tweeted, kids in the age group will have to have the second shot by Dec. 27.

De Blasio, who leaves office at the end of the month and has indicated he may seek the nomination for governor of New York next year, has sought to portray himself as a national leader in the fight against COVID-19.

His successor, Democrat Eric Adams, will be sworn into office on Jan. 1. Evan Thies, a spokesman for Adams, said in a statement that the mayor-elect "will evaluate this mandate and other COVID strategies when he is in office and make determinations based on science, efficacy, and the advice of health professionals."

New York business leaders immediately spoke out against the mandate. Kathryn Wylde, head of the business group Partnership for NYC, told the New York Post she was "blindsided" by the mayor's announcement.

"There's no forewarning, no discussion, no idea about whether it's legal or who he expects to enforce it," she said. "There's been no consultation.

"We were blindsided," she emphasized.

"Mayor de Blasio can't leave fast enough. He has crushed small business, the economy, and quality of life. How many more New Yorkers does he want to see move to the free state of Florida?" U.S. Rep. Nicole Malliotakis (R-NY), who represents Staten Island and Brooklyn, told the Post.

"When you dangerously combine a far-left, lame-duck politician, who is anti-business, one-dimensional, unaccountable, not bright and has a perpetual 'I always know best' attitude,' you get Bill de Blasio, the Worst Mayor in America," Zeldin said in a statement.