NYC Council Gives Non-Citizens Right to Vote, a 'Slap in the Face' to Immigrants Who Earned Citizenship 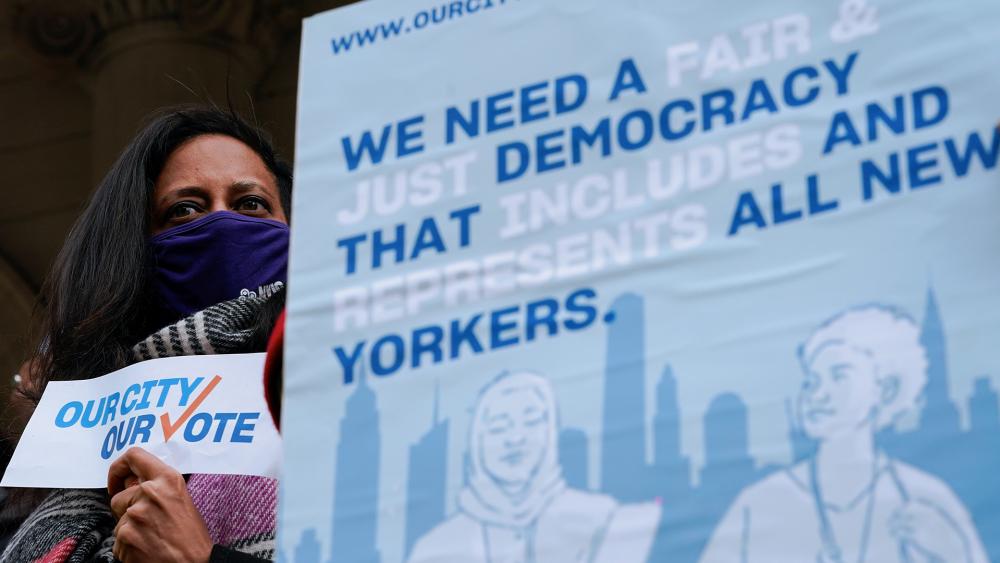 An activist participates in a rally on the steps of City Hall ahead of a City Council vote to allow lawful permanent residents to cast votes in local elections. (AP Photo/Mary Altaffer)

The New York City Council voted Thursday to give non-citizens the right to vote in local elections.

The move allows non-citizens to vote for the mayor, city council, comptroller, and the heads of the city's five boroughs. It would allow non-citizens who have been lawful permanent residents of the city for at least 30 days, as well as those authorized to work in the U.S., including so-called "Dreamers", to participate in local elections.

However, non-citizens still wouldn't be able to vote for president or members of Congress since those are federal races, or in the statewide NY elections that pick the governor, judges, and legislators.

Outgoing New York City Mayor Bill de Blasio recently said he would not veto the measure.  The New York Post reports De Blasio, who like a majority of the City Council members, leaves office at the end of the year, has repeatedly expressed reservations about the bill, in part because of "outstanding legal questions." He thinks the state legislature has the authority to decide on the matter.

Incoming mayor Eric Adams has said he supports the bill.

Republicans are threatening legal challenges against the measure. Opponents say the council lacks the authority on its own to grant voting rights to non-citizens and should have first sought action by state lawmakers.

Councilwoman Inna Vernikov (R-Brooklyn), a native of Ukraine, said extending voting rights to non-citizens is a "slap in the face" to immigrants who worked hard to earn their citizenship, according to the newspaper.

Several Democrats have also spoken out against it including Councilman Mark Gjonaj (D) who represents parts of The Bronx.

"This bill in its current form doesn't protect New York City; it makes it vulnerable to outside influence," he told the NY Post. "This bill makes the crown jewel of the country vulnerable."

"It doesn't take much to … figure out how dangerous this bill is for the future of New York City," Gjonaj added. "This bill … is a threat to our sovereignty."

Councilman Kalman Yeger (D-Brooklyn) believes the measure violates state law, according to the paper. "It's unconstitutional, under state law. It's very clear," said Yeger.  "We do not have the legal authority to do this."

The measure directs the Board of Elections to draw up an implementation plan by July. Non-citizens wouldn't be allowed to vote until elections in 2023.