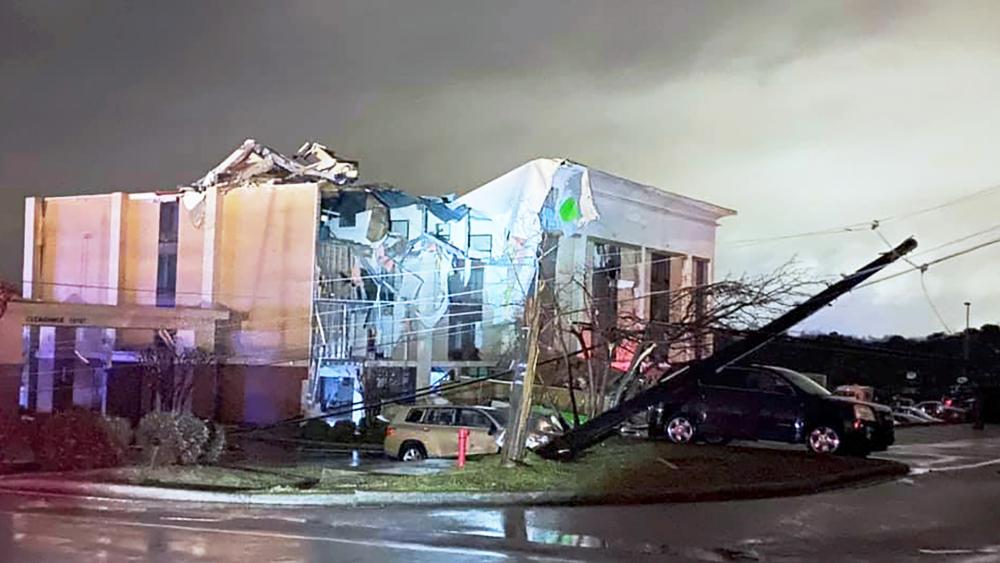 A Hampton Inn hotel is severely damaged after a tornado tore through Fultondale, Ala., on Monday, Jan. 25, 2021. (Alicia Elliott via AP)

Multiple other reports of injuries and people trapped emerged throughout the night, with dozens of people suffering injuries.

AccuWeather Global Weather Center – A large and dangerous tornado struck a northern suburb of Birmingham late Monday night under the cover of darkness, leaving behind a slew of damage with reports of injuries.

The twister was reported in the town of Fultondale around 10:30 p.m. Monday and unleashed extensive damage throughout Jefferson County. The Jefferson County Emergency Management Agency urged residents to seek shelter immediately shortly after the tornado was confirmed on the ground near Fultondale.

As of 6:30 a.m. local time, one death from the twister has been confirmed by Fultondale Fire Chief Justin McKenzie, according to CBS News. The death was of a young man, believed to be a teenager, who was trapped in his basement with his family after a tree fell on their home.

Other members of the victim's family suffered severe injuries. 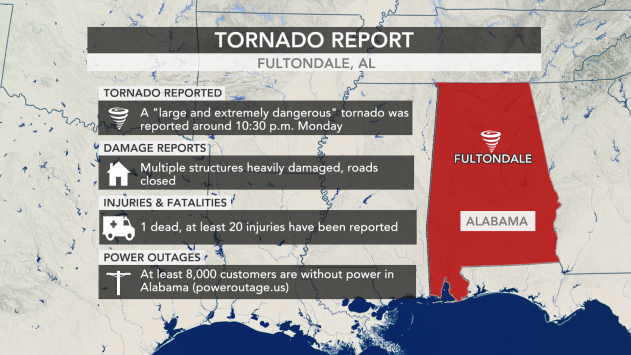 Multiple other reports of injuries and people trapped emerged throughout the night, with dozens of people suffering injuries. According to CNN, about 30 people are injured as of Tuesday morning, including 17 individuals who were rushed to emergency rooms, McKenzie said.

Around 10:45 p.m. CST Monday, a thunderstorm produced a tornado that knocked over street signs and utility poles and damaged buildings in Fultondale, Alabama. The National Weather Service office in Birmingham issued a tornado warning for the thunderstorm, saying a "confirmed large and extremely dangerous tornado" was on the ground and heading toward Fultondale. 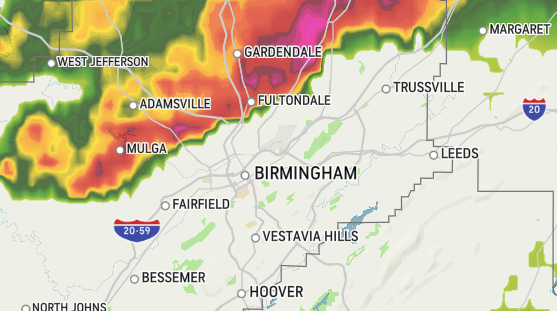 A radar image from 10:45 on Monday showing the thunderstorm that produced a damaging tornado over Fultondale, Alabama. (AccuWeather)

On radar, a debris signature was seen, confirming damage that was taking place. A debris signature occurs when items such as trees, parts of buildings and other objects are thrown high into the atmosphere by the tornado. This is a clear sign to meteorologists that a tornado is causing damage.

AccuWeather, recognized and documented as the most accurate source of weather forecasts and warnings in the world, has saved tens of thousands of lives, prevented hundreds of thousands of injuries and tens of billions of dollars in property damage. With global headquarters in State College, PA and other offices around the world, AccuWeather serves more than 1.5 billion people daily to help them plan their lives and get more out of their day through digital media properties, such as AccuWeather.com and mobile, as well as radio, television, newspapers, and the national 24/7 AccuWeather Network channel. Additionally, AccuWeather produces and distributes news, weather content, and video for more than 180,000 third-party websites.