Snowstorm Could Snarl Travel Across Parts of Southeast 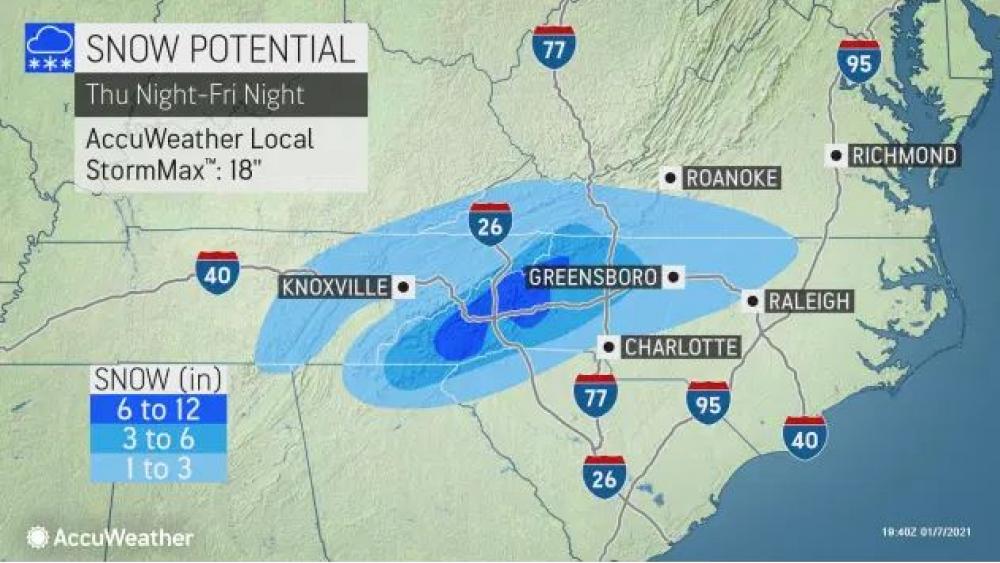 AccuWeather Global Weather Center –  A storm that AccuWeather meteorologists have been keeping tabs on for over a week is expected to trigger snow and slippery travel across parts of the southeastern United States from Thursday night to Friday night, but as is often the case, the heaviest snow is forecast to fall over the southern Appalachians, and milder air may limit wintry weather closer to the Atlantic coast

"Marginal temperatures and a weak to moderate storm that continues to move along, rather than a strong, slow-moving storm, will play a role in keeping a lid on snowfall accumulations, especially outside of higher-elevation locations over the interior South with this storm," AccuWeather Senior Meteorologist Bill Deger said.

Air temperatures during much of the storm may hover above the freezing mark in some Piedmont locations.
"Snow can still fall at temperatures above freezing, but in this case, and especially so in the Southern states, it must snow at a fast and heavy rate to bring more than a light accumulation," Deger explained.

Areas to the northwest of the Interstate 85 corridor in North Carolina are expected to pick up 1 to 3 inches of snow, but areas to the southeast will have little to no snow accumulation. Conditions will change rapidly over a short distance around cities such as Charlotte and Raleigh, North Carolina, and Greenville, South Carolina. Rain or a rain and snow mix will occur to the southeast of these cities, while all snow or a wintry mix will fall to the northwest of these hubs.

As the late-week storm unfolds, some accumulating snow is forecast to dip as far south as the mountains of northern Georgia and the hills of northern Alabama.

Read the full story on Accuweather.