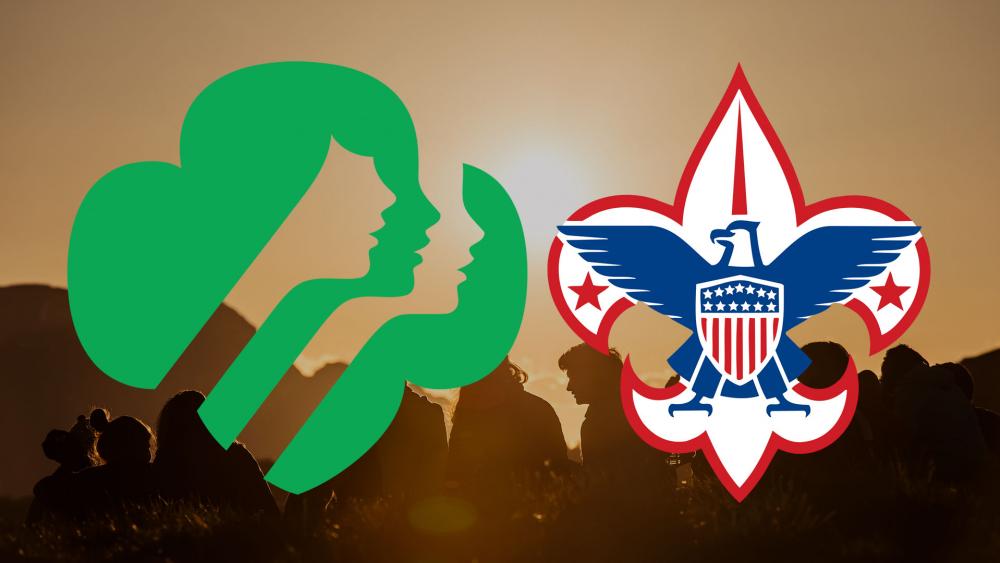 The logos of the Girl Scouts of the USA, left, and the Boy Scouts of America.

A record drop in membership is plaguing the country's two most iconic youth organizations – the Boy Scouts of America and the Girl Scouts of the USA.

Both organizations blame the loss of members, including teens and elementary school children, on the COVID-19 pandemic, and what they say is partly due to social trends that have been shrinking their ranks for decades.

Both groups insist they'll endure and will continue their missions of teaching skills and teamwork, providing outdoor adventure, and encouraging community service.

Membership for the BSA's flagship Cub Scouts and Scouts BSA programs dropped from 1.97 million in 2019 to 1.12 million in 2020 – a whopping 43% plunge. Court records show membership has fallen further since then, to about 762,000, according to the Associated Press.

The Girl Scouts reported a youth membership of about 2.8 million in 2003. The BSA had more than 4 million boys participating in the 1970s.

Both groups, like several other U.S. youth organizations, have experienced declining membership for many years partly due to scandal, conflicts, and decisions to publicly embrace liberal ideas on sexuality. Just a few years ago, the Boy Scouts even took the "Boy" out of their organization's title to embrace a genderless approach.

Christian parents, concerned over the moral downward spiral of the Boy Scouts of America (BSA), have been shunning the organization over the past few decades in favor of faith-based alternatives like Trail Life USA.

Other reasons for the exodus from Boy and Girl Scouts include competition from sports leagues, a perception by some families that they are old-fashioned, and busy family schedules. The pandemic also meant having to hold Cub Scout, Boy Scout, and Girl Scout meetings virtually.

"There are a lot of interesting things for kids to do these days," Yaros, the father of a Cub Scout, told the AP. "And scouting doesn't seem to be keeping up."

The Boy Scouts sought to seek bankruptcy protection in February 2020 to cope with thousands of lawsuits filed by men who allege they were molested as youngsters by scout leaders. The case, which is currently in federal bankruptcy court, continues to move slowly as attorneys for both sides negotiate the creation of a victim's trust fund. If all goes as planned, monetary contributions from the BSA and its 252 local councils will support the trust fund.

In addition, BSA finances have been drained by the pandemic, the membership drop, and rising costs of liability insurance. A disclosure statement in the bankruptcy case says its gross revenues dropped from $394 million in 2019 to $187 million last year, the AP reported.

Meanwhile, the Girl Scouts have also had bureaucratic problems. There is an ongoing legal battle pitting the national headquarters against two of the 111 local councils, which have refused to start a nationwide technology platform.

Despite these challenges, both the Boy Scouts and Girl Scouts' officials, say they're optimistic about the future. They report their summer camps are full, special events are sold out, and they're expecting many thousands of families to join and others to rejoin the organizations now that activities are occurring in person rather than virtually.

"We knew some girls would take a pause," said Girl Scouts spokeswoman Kelly Parisi. "But as the pandemic goes in the rear-view mirror, we've seen a substantial rebound... We feel really good going into the fall recruitment."

Other adult Boy Scout leaders noted the renewed interest in Scouting as parents look for ways to keep their children active with outdoor experiences rather than see them spending most of their time on the internet and social media.

Bryan Koch of Madison, Wisconsin, has been an adult leader for more than a decade as two sons went through Cub Scouts and Boy Scouts.

"I'm a firm believer in what scouting can be," Koch told the AP. "It helps us develop more well-rounded and aware young men and women. That's sorely needed in our country right now."

After making their mark in the two scouting programs by attaining the highest rank in the respective programs, some Eagle Scouts and the equivalent Girl Scout Gold Award recipients have even gone on to leave their mark in the fields of business, entertainment, law, and even the frontier of outer space.