'Jesse Watters Is Officially Out of Control': Fox Host Laughs Off Media Jabs, Shares His Crazy Journey to the Top 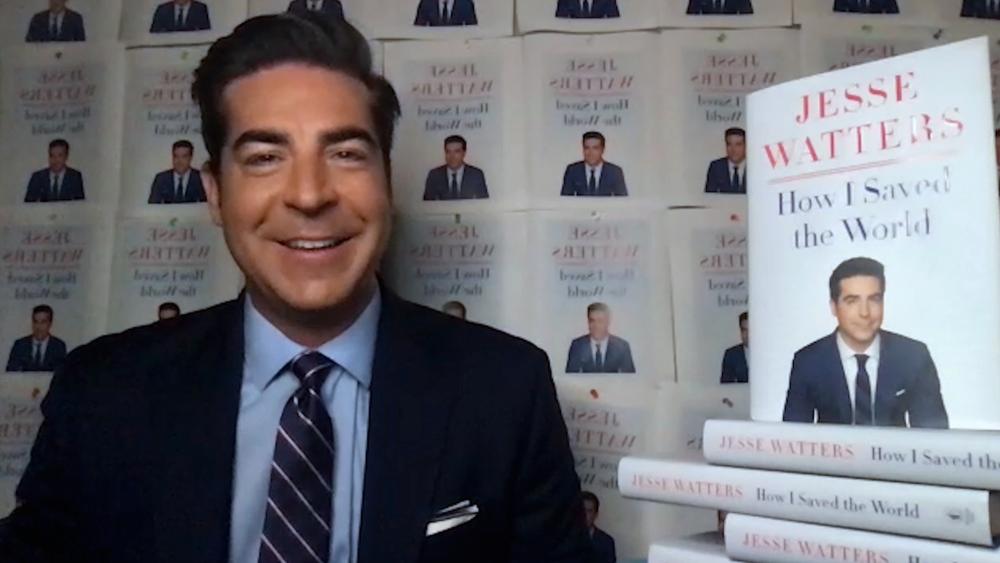 6265894245001
'Jesse Watters is Officially Out of Control': Fox News Host Laughs Off Media Jabs & Shares His Crazy Journey to the Top

WASHINGTON – He's funny, smart, and savvy when it comes to politics and now Fox News' Jesse Watters is taking that talent to the pages of a new book, How I Saved the World.

In an interview with CBN News, Jesse explained how his wife helped him come up with the title. She's also the person he dedicated the book to.

"It was important to dedicate it to her for so many reasons but timing is everything in this life and when you get the timing right great things can happen and that's what I meant by our relationship and the book and everything that followed."

And he got the timing right at Fox News too, although, Jesse didn't start at the top.

"I was working Tuesday through Sunday, 3 pm to midnight," Jesse explained. "I believe I was making minimum wage and my job consisted of being handed tapes and then taking a Sharpie and then writing the label of the footage on the tape, closing it up, and giving it to someone. It was arts and crafts. And that's what I did and there was nowhere to go but up from there."

And up he went, eventually landing a production assistant role on the O'Reilly Factor.

"My producer said, 'Bill, this is Jesse Watters. You just hired him to be your new production assistant,' and he said, 'Okay, go. What do you got?' And I pitched and I bombed," said Jesse. "I was pulled into my producer's office later that afternoon and my producer said, 'Jesse, Bill does not think you're articulate enough to work in television. You have two weeks to turn it around or you're fired.' So, I stared into the abyss, turned it around, and a couple of months later I pitched a story about a bad judge in Alabama who gave a soft sentence to a sex offender. Bill hears and then he says, 'Alright Watters, you're going to go down to Alabama and confront the judge."

That eventually led to his "Watters World" segments and now show. Of course, many Fox News viewers know Jesse from "The Five."

Jesse writes about it all including how he became a conservative.

"I was in college and I was in my dorm room watching TV late at night and I saw C-Span and you know you get all these senators and congressmen up there and they're pontificating about some bill and I just started listening as a history major," he remembered. "Republican senators sounded more like they had a better grasp of what the founders had intended which was limited government and personal freedom and responsibility and that kind of clicked with me and after that, I started listening to [Rush] Limbaugh in my dorm room which I don't think anybody else did in college."

Regarding former President Donald Trump and a possible 2024 run:

"He's going to play a big role in 2022 and the midterms, in fundraising, in campaigning, and after that, he's going to get the lay of the land and he's going to make an assessment after those midterms: Am I going to take another shot? He'll look at Biden, he'll look at the economy, he'll look at inflation and the border and see, is there an opening for me to get back and run?"

Jesse says if not Trump, he likes Florida Governor Ron DeSantis for the Republican ticket.

"DeSantis is making a really strong play for me personally," said Jesse. "I've seen his leadership down in Florida. He gets it. He's tough. He doesn't bow to the press and he's unapologetic and that's the kind of leadership Republicans respond to, kind of an aggressive leader who makes quick decisions, decisions based on the facts and that's the kind of guy I see in DeSantis."

Like DeSantis, Jesse knows what it's like to be attacked by people who disagree with him. The back of the book features jabs, all of which Jesse seems to relish.

The Washington Post: "Jesse Watters is officially out of control."

And Jesse's mom: "Where is Dana Perino? She is desperately needed."

"This is a hilarious book," explained Jesse. "This has all these stories of me being sent to survival camps by my liberal parents. These are stories about having dinner at the White House with President Trump and all these crazy things that happened, inside stories about Fox News, jumping out of cars and confronting villains, interviewing spring breakers on the beach."