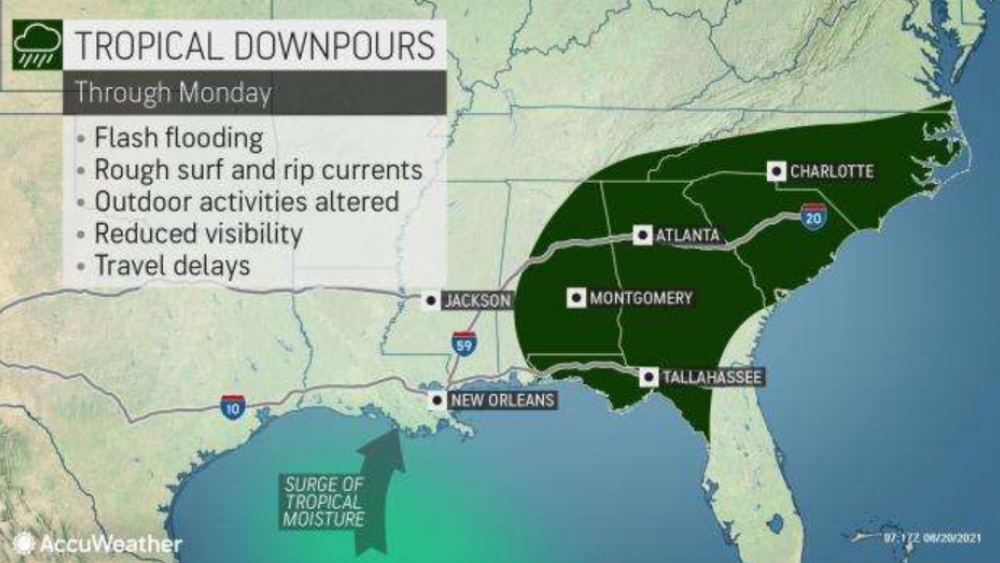 The third tropical storm of the season formed along the Louisiana coast early Saturday, but it could go on to impact much of the eastern U.S. and even Canada before dissipating.

Tropical Storm Claudette formed early on Saturday morning, but by the late evening was downgraded to a tropical depression. As of 7 p.m. CDT, Claudette was located 75 miles west of Montgomery, Alabama.

AccuWeather meteorologists began to monitor the western Gulf of Mexico for tropical development over a week before Tropical Storm Claudette was named. Even before strengthening to a tropical storm, Claudette brought drenching downpours to portions of Louisiana, southern Alabama and Mississippi, and the Florida Panhandle starting late on Friday.

As much as a foot of rain is possible in this zone before the storm moves northeastward across the remainder of the Southeast this weekend. Widespread rainfall totals of 4-8 inches from Friday to Saturday were common across portions of Louisiana, Mississippi and Alabama as Claudette moved away from the area overnight Saturday.

As it moved over land on Saturday, Claudette lost wind intensity and was designated a tropical depression. Even with lesser wind gusts, heavy rainfall is expected to impact the southeastern United States through Sunday. Widespread rainfall amounts of 2-4 inches are forecast to spread across Georgia and both North and South Carolina. 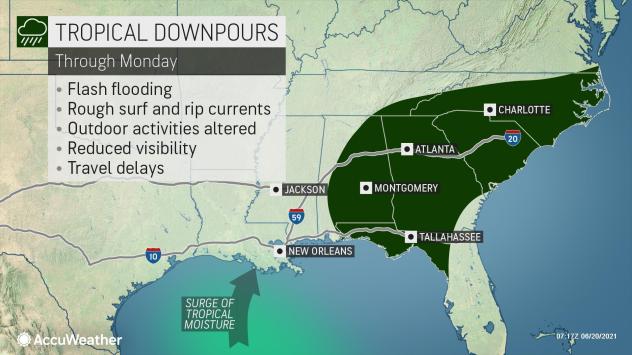 As Claudette continues its northeastward trajectory across North Carolina through Monday, the feature may be able to pull more moisture in from the Atlantic Ocean, leading to enhanced downpours.

Fortunately, parts of the region are in need of more rain. Portions of North Carolina and South Carolina, including cities like Winston-Salem, Charlotte and Myrtle Beach, are either abnormally dry or in a moderate drought, according to the U.S. Drought Monitor.

Too much rain too fast could initially lead to flooding in these dry areas before the ground is able to absorb the rain. Heavy downpours may also bring reduced visibility, ponding on roadways and slowed travel for motorists.

Later on Monday, Claudette is forecast to slide off the North Carolina coast and go back over the Atlantic. Waters near the Outer Banks are warm, in the lower to middle 80s F, which may help Claudette restrengthen into a tropical storm by Tuesday morning.

Should this occur, the mid-Atlantic coast from Myrtle Beach, South Carolina, up to Ocean City, Maryland, could experience rough surf, rip currents and even minor coastal flooding, especially at high tide.

Tropical storm warnings have been issued along part of the coast of North Carolina due to the anticipated impacts from the system. 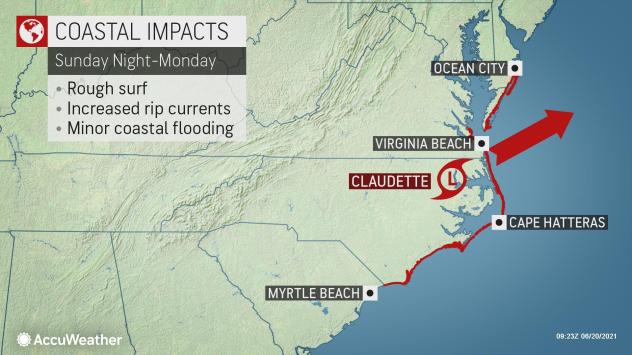 AccuWeather Meteorologist Randy Adkins says that it’s not out of the question that Claudette could regain some wind intensity, perhaps even restrengthen into a tropical storm, over North Carolina. Such a feat has happened with tropical systems in the past.

“Hurricane Danny, back in 1997, made landfall along the Gulf Coast then continued to lose wind strength as it moved northeastward across the southeastern U.S. over the next few days. However, before re-emerging over the waters of the West Atlantic, Danny strengthened back to a tropical storm over North Carolina,” said Adkins.

Should this scenario occur, wind gusts in excess of 40 mph would be possible, especially in the Outer Banks of North Carolina on Monday.

Additionally, there could be rough surf and rip currents for the Massachusetts Cape and the islands of Nantucket and Martha's Vineyard as Claudette passes off to the east on Tuesday.

Claudette is forecast to continue moving northeastward through early this week. Eventually, the tropical system will move far enough north that the cooler waters of the North Atlantic Ocean will help Claudette to again lose wind intensity as it nears Atlantic Canada. 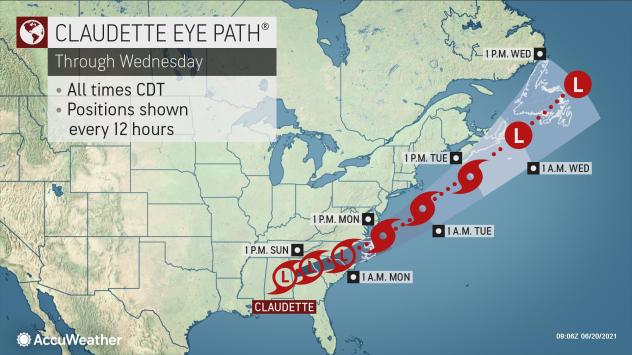 Even without being a tropical storm, Claudette is likely to deliver a wave of heavy rain to Nova Scotia, Prince Edward Island and Newfoundland by the middle of the week. By this point, any of Claudette's moisture is likely to move quickly, limiting the region from higher rainfall totals. Some rough seas and rip currents are forecast to impact southern Nova Scotia until the storm has passed.