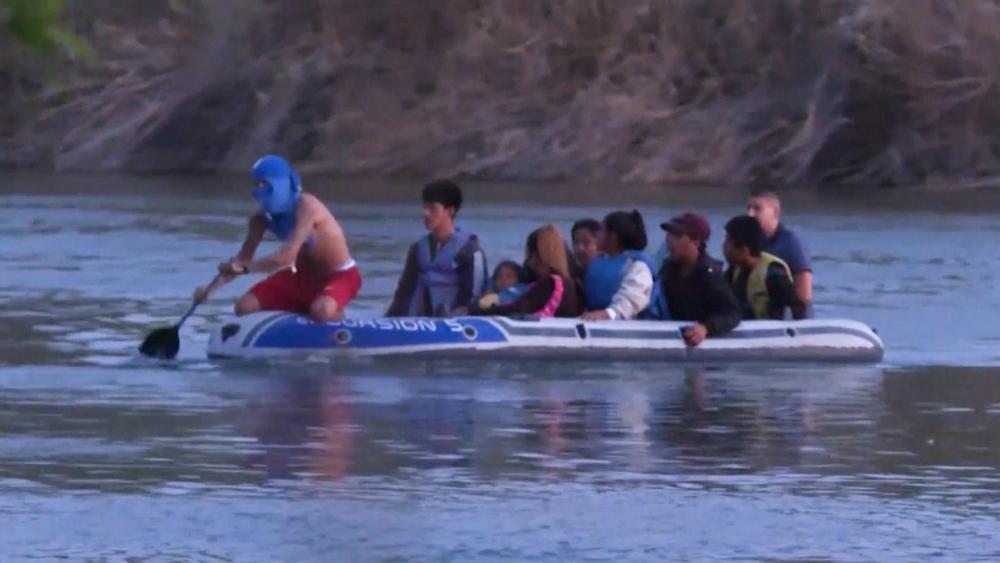 MCALLEN, Texas - Right now in South Texas, the increase of people illegally crossing the border isn't just affecting law enforcement.  Local landowners and ranchers are daily dealing with uninvited guests trespassing on their property, breaking into their homes and sheds, and damaging their gates and fences.

"It just seems to be getting worse and worse," Justin Cappadona of Hidalgo County recently told CBN News.

"We've had groups come up into our backyard and approach us looking for food and water," continued Cappadona. "I work 25 to 30 miles in town, and my wife's out here by herself so it's a safety issue, safety concern."

"It was bad during the Obama years. It slowed down during the Trump years. But in the last three months, we've seen an uptick, unfortunately," he explained. "I've seen anywhere from 15 to as many as 30 people come out of a vehicle."

Cappadona said he's constantly repairing damage to his personal property, like his fences and gates that are struck by vehicles fleeing law enforcement, and he's left footing the bill.

"What ends up happening as you can see, vehicles will be coming down. If they're being chased by Border Patrol or a sheriff or DPS, what happens a lot of the times is that at some point they'll decide they can't get away. So they'll end up crashing through the fence. Take out a couple of posts here, bring the fence down, and then they'll get out onto a Callecho road such as this, and then they'll continue on into the ranch," Cappadona recounted.

A neighboring rancher who requested to remain anonymous tells CBN News the trespassing groups are getting more frequent and aggressive, armed with high-powered weapons.  They're finding everything from drugs to dead bodies on their property.

"How do we fix it?" asked Cappadona. "I don't know, probably a combination of a border wall and immigration policies."

"What DPS is doing is absolutely necessary. The governor is right in trying to do something down here, but it has a ripple effect that causes a negative impact on our communities throughout the state of Texas," Sheriff Roy Boyd of Goliad County explained to CBN News.

While Sheriff Boyd's county is 200 miles from the Rio Grande Valley, he said his county still feels the problems at the border.

"In Goliad County, we're having staff sites that the cartels are using to store illegal aliens, to strip stolen trucks, to store and to move drugs towards the larger market in Houston," Boyd noted.

"To be quite frank, that problem we have with all of these efforts we're doing right now is none of these efforts are designed to actually win the war that we are facing with our neighboring country of Mexico and the cartels that reside there," said Boyd. "We have to quit putting a band-aid on a chest wound and we have to go after what's happening. We have to have a comprehensive plan that stops it on the other side of the river."

The added security is getting expensive for the state of Texas.

"Texas is spending $2.5 million a week just with the highway patrol that's stationed here at the border," U.S. Rep. Michael Cloud, (R-TX), told CBN News. "In addition to that, we have the National Guard who's here by order of the governor. That's another roughly $2 million a week spending just to help secure the border."

Congressman Cloud recently led a group of representatives to the border to see the crisis firsthand.

"Just a few months ago this crisis point was mitigated as a crisis," he said. "You're always going to have a little bit of tension at the border. But the overwhelming crisis that we're seeing now did not exist because of the policies that were put in place by the Trump administration."

"The Biden solution to the surge at the border has been to transport everyone throughout the U.S. So this issue we've known throughout Texas has been exacerbated is being transported throughout communities throughout Texas," he said. "It's been said that every town is now a border town and you can see how that's playing out."

Cloud argues the answer is simple – return to policies that worked and finish Trump's border wall.