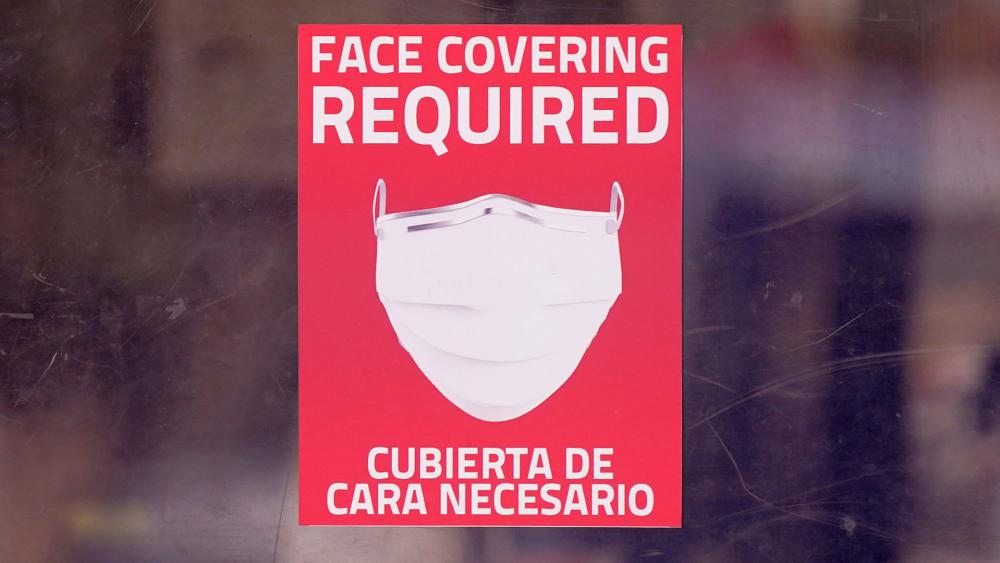 A mask required sign is displayed on the entrance to a business Tuesday, March 2, 2021, in Dallas. (AP Photo/LM Otero)

Texas Governor Greg Abbott teased a major announcement Tuesday and this afternoon declared an end to mask mandates and that all businesses will be opened up at 100% capacity beginning March 10th.

He made the comments in Lubbock, Texas at a planned meeting with business leaders.

“Texas has been ranked #1 in the United States in business for 16 straight years,” Abbott said before explaining that despite weathering the economic storm of COVID-19 relatively well, people were still suffering from restrictions.

The governor then became the first in America to announce a full re-opening.

“It is now time to open Texas 100%. Everybody who wants to work should have that opportunity. Every business that wants to be open should be open,” Abbott said.

“Let me tell you why now is the right time to do this. Texas is far better positioned now than when I issue my last executive order last October,” the governor explained. “Today we set a one day record amount of vaccines administered…and we’re now administering about a million shots a week.”

Speaking to rounds of applause from the business leaders in the room, Abbott continued to lay out his reasoning for making the move.

“Equally important, we are getting the vaccines to those who need it most. By next Wednesday, over half of our seniors will have received a vaccine shot. And by the end of this month, every senior who wants a vaccine shot will be able to get a vaccine shot.”

“COVID has not totally disappeared,” Abbott warned before saying that while it’s still out there, “state mandates are no longer needed.”

“So today, I’m issuing a new executive order that rescinds most previous orders,” he said. “All businesses of any type are allowed to open 100%. I am also ending the statewide mask mandate.”

Abbott also explained that local regions will have authority to impose some limited restrictions if hospitalizations rise and meet certain criteria. The governor said, however, with the amount of vaccinations circulating throughout the state he did not expect that to be a problem.

“Removing mask mandates does not remove personal responsibility,” The governor said. “To stay safe, Texans should continue following medical advice on preventing COVID, just as they would with other health issues.”

This announcement comes on the heels of President Biden and Dr. Anthony Fauci making the case for masks and social distancing even after vaccines are widely distributed.