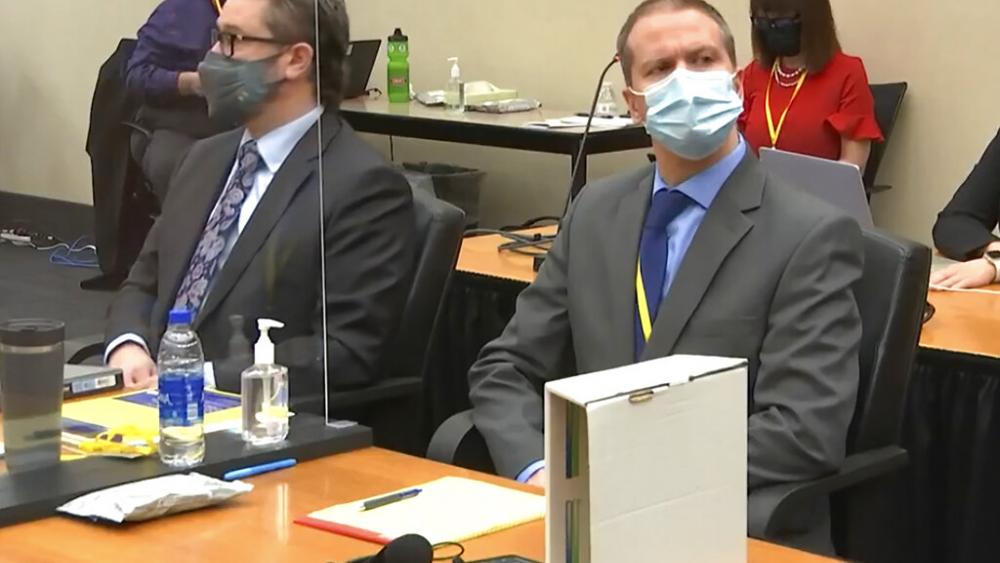 The Minnesota murder trial for former police officer Derek Chauvin got underway Monday. The trial began nearly a year after the death of a black man under the knee of the white officer.

George Floyd's death set off protests and a national reckoning on race, and now the question of criminality lands Chauvin on trial, charged with second-degree murder, manslaughter, and third-degree murder.

The video of the incident played out again Monday during opening statements – the same video that rocked the world last year.

This trial has the attention of much of the nation and it started out front and center with that disturbing video which was captured by a bystander in Minneapolis who witnessed Floyd's arrest.

"You guys aren't checking his pulse and doing compressions if he needs them?!" a bystander can be heard saying.

Prosecutors were quick to show jurors the video that showed the final minutes of Floyd's life. Several bystanders called again and again for Officer Chauvin to get up and provide medical care for Floyd. Prosecutor Jerry Blackwell argued that putting Floyd in the prone position for over nine minutes went against Minneapolis Police Department training – all for merely a misdemeanor offense – a $20 counterfeit bill.

"You will not hear any evidence that Mr. Floyd knew it was fake or did it on purpose," the prosecutor said. "You'll learn from witnesses that we will call that police officers could have written him a ticket and let the courts sort it out."

Blackwell highlighted the length of time that Officer Chauvin had Floyd pinned – nine minutes and twenty-nine seconds – and argued that he used lethal force that was unnecessary.

"Mr. Derek Chauvin betrayed this badge when he used excessive and unreasonable force upon the body of Mr. George Floyd," argued Blackwell.

On the other side, the defense argued, "Common sense tells you that there's always two sides of a story."

Defense attorney Eric Nelson told a different story, arguing that Floyd was under the influence of multiple drugs and difficult to constrain.

"You will see that three Minneapolis police officers could not overcome the strength of Mr. Floyd. Mr. Chauvin stands 5 foot 9, 140 pounds. Mr. Floyd is 6 3, weighs 220 pounds."

Nelson argued that once in the police car, Floyd resisted, rocking the car back and forth, before Chauvin took him out. He also argued that the arrest happened in a high-crime area and that a large crowd gathered that police believed was a threat. Ultimately Nelson argued, the cause of Floyd's death is debatable and that he had drugs, methamphetamines and fentanyl, in his system at the time of death.

"The evidence will show that Mr. Floyd died of a cardiac arrhythmia that occurred as a result of hypertension, coronary disease, the ingestion of methamphetamine, the adrenaline flowing through his body," said Nelson.

The prosecution then put its opening witnesses on the stand.

"He was going into distress because of the knee," explained eye witness Donald Williams. "And he vocalized it. 'I can't breathe. I need to get up,' and 'I'm sorry.'"

The 911 operator also testified saying she watched the incident unfold on street camera and later reported it to a supervisor.

"My instincts were telling me that something's wrong," said Jena Scurry. "Something is not right. I don't know what, but something wasn't right."

Fourteen jurors – eight white and six black or multi-racial – will hear this case which is expected to last up to four weeks. There's concern that the trial could spark violent protests. That's why 100 members of the Minnesota National Guard are stationed around the Hennepin County Government Center.