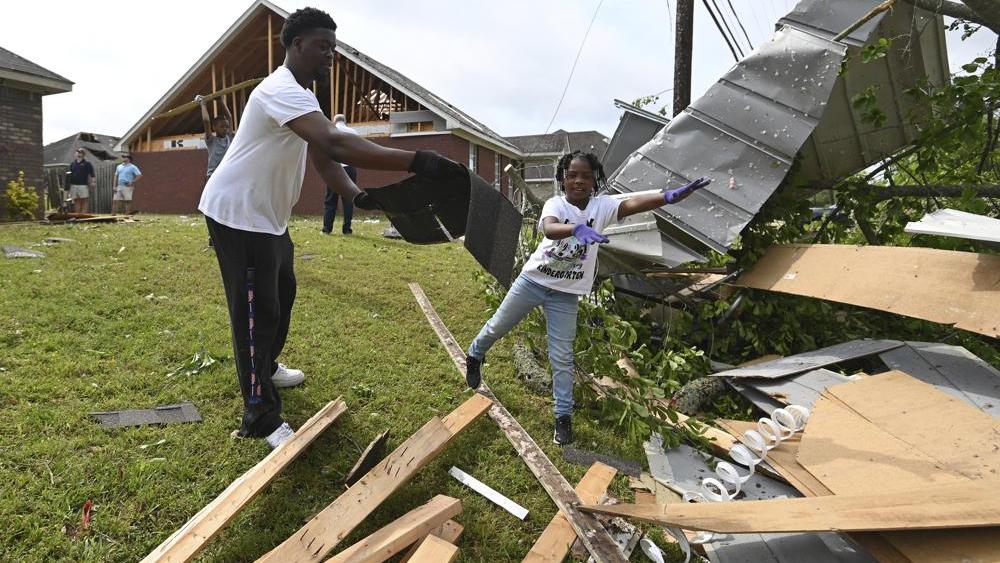 The South is bracing for more severe weather today after at least 23 tornadoes swept through the region in 24 hours.

A Georgia man was killed after a tree and power lines fell on his vehicle. Emergency officials reported that a 55-year-old woman died after a tree smashed into her home.

A tornado warning was issued in Tupelo, Mississippi, where trees were knocked down and homes sustained major damage.

The storm tore a roof off one house and flipped a car over, WTVA reports. Damage was also reported at Tupelo Middle School and in nearby Pontotoc County.

About 45 miles to the southeast, Calhoun City also was hit by a possible tornado.

Crazy close tornado video from drone. I had to make a quick getaway and drone didn’t make it as it got caught in the inflow and I lost connection as tornado was cutting me off from the drone. #mswx #tornado pic.twitter.com/5S2IkOpeHs

And there were reports of a tornado touching down in Tompkinsville, Kentucky on Monday.

Emergency officials in Monroe County reported "significant damage" to more than 30 homes, according to WKRN-TV. Uprooted trees, downed power lines, and massive gusts of wind destroyed at least five of those homes.

States with the highest risk include Louisiana, Mississippi, Alabama, and Tennessee.

Additionally, experts are urging residents to make sure they can receive weather alerts before nightfall as the risk of severe conditions is expected to continue well after dark.

"There will also be pockets of flash flooding, especially in low-lying and poor drainage areas, but fortunately the storms will be moving along at a decent clip, which will limit the duration of intense rainfall for most areas," said AccuWeather Senior Meteorologist Brett Anderson.