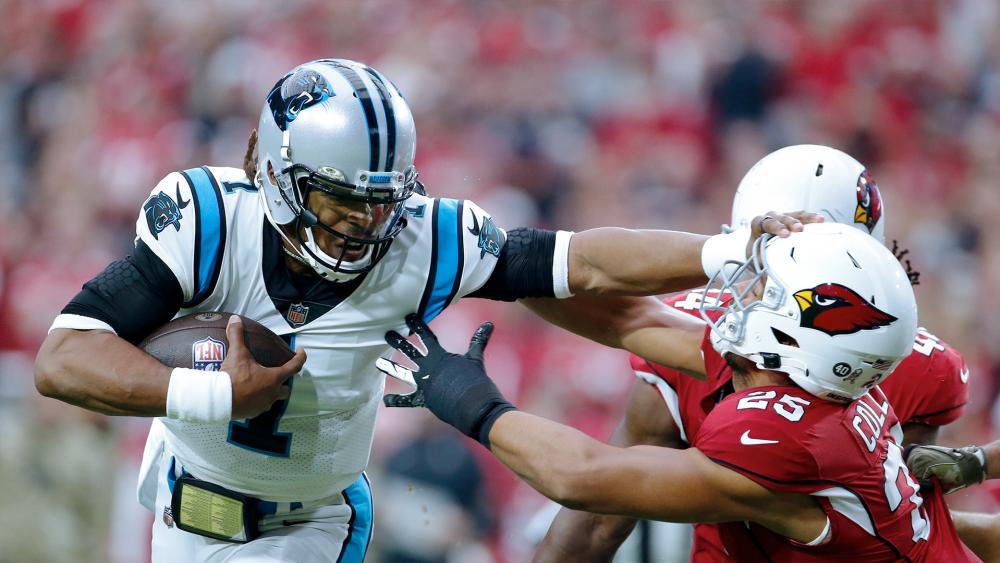 "I just want to take this opportunity — man, wow — whoever's watching this, God is real. That's fact," he told Fox Sports on the field. "I'm just a vessel of Him and He's working in my life. I was teasing some people about it, about what's going on. You can't even make up a lie this good. I'm just happy to be back. I'm just happy to be a contributor to a team that's already good; we're just trying to get over the hump."

Newton's return to the gridiron comes after being released from the New England Patriots in August.

"This time last week I was eating a bowl of cereal," he said. "So that just puts things into perspective."

During a news conference, Newton told reporters that he used his time at home to allow God to work on him.

"After going to church, being with my children, and not even watching football...it was about maximizing the person I need to be," Newton shared.

"God is working in my life right now and I ain't hiding away from it," he added.

The NFL veteran quarterback told reporters that Sunday's win against the Cardinals was a full-circle moment.

"Man, God is good, I can tell you that. There's something about the significance of today," he said.

According to Sports Spectrum, Sunday's game at StateFarm Stadium is where Newton played his final collegiate game. It was also where he played his first regular-season NFL game. It now marks his professional return with the Panthers.

During the press conference, Newton alluded there was a biblical significance in facing the Arizona Cardinals as well.

"In this morning's devotion, I was reading about Moses. God spoke to Moses in the desert," he shared.

Cam believes the team's win is not a coincidence because Arizona is located in the desert and the Cardinal's fan base has been nicknamed "the Red Sea".