Candace Owens Raises $250,000 for VA Police Officer Who Was Fired for Donating to Rittenhouse Fund 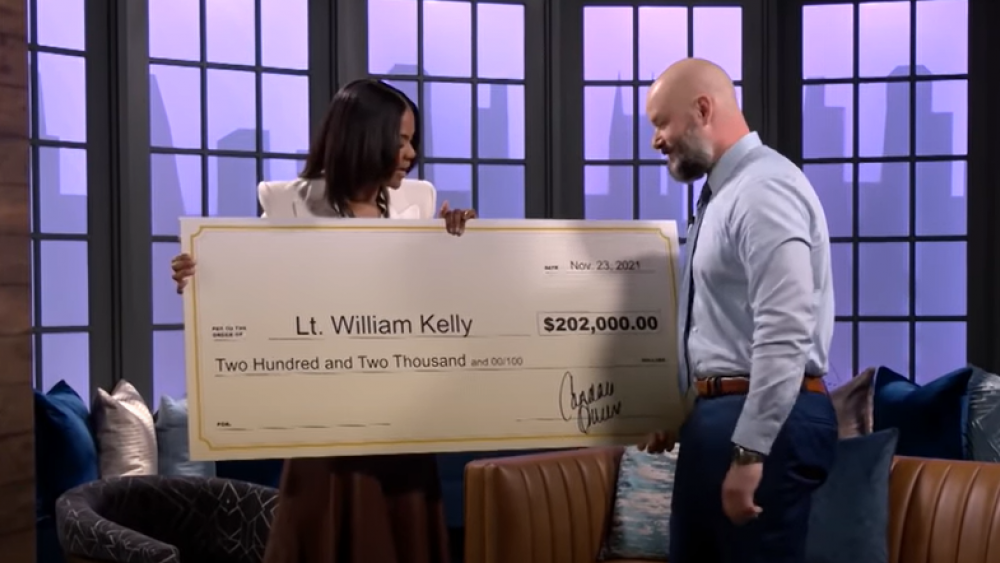 A Virginia police officer, who was fired for anonymously donating to a fund for Kyle Rittenhouse, received a check for over $200,000 from conservative commentator Candace Owens.

Owens presented Norfolk Police Lt. William Kelly with a huge check on Tuesday for $202,000 on The Daily Wire's "Candace" show. She told Kelly that the actual amount raised had grown even more, surpassing $250,000.

Kelly was let go by the Norfolk Police Department in April for contributing to Rittenhouse's defense fund, WAVY News reports.

"I am so grateful for our police officers," Owens said to Kelly. "I can't even imagine especially in today's political climate knowing that you're fighting for justice and you have an entire ecosystem of horrible people that are constantly fighting against you, fighting to defund you, telling you you're not allowed to exist unless you side with narratives that are actually lies. So this just makes me so happy."

Owens raised the money through the crowdfunding website GiveSendGo with an initial goal of $100,000.

"I think the point of his suspension and doing it so publicly was to humiliate him," Owens explained. "So as a counter to the leftist point, we are going to publicly celebrate his bravery and in the process hopefully humiliate every person involved in supporting the lie that Kelly did anything to dishonor the Norfolk community ... he did not."

Kyle Rittenhouse was acquitted of all charges on Nov. 19 after pleading self-defense in the Kenosha, Wisconsin, shootings that captured national attention in a debate over guns and racial justice.

Kelly, 42, said he donated to a fundraiser for Rittenhouse during the summer of 2020, according to Fox News.

A message with the donation said, "God Bless. Thank you for your courage. Keep your head up. You've done nothing wrong. Every rank-and-file police officer supports you. Don't be discouraged by actions of the political class of law enforcement leadership."

Kelly said he did not make the donation while he was working and it was several months later before he was confronted by his employer.

Despite everything that has happened, Kelly says he would return to his job if it was offered.