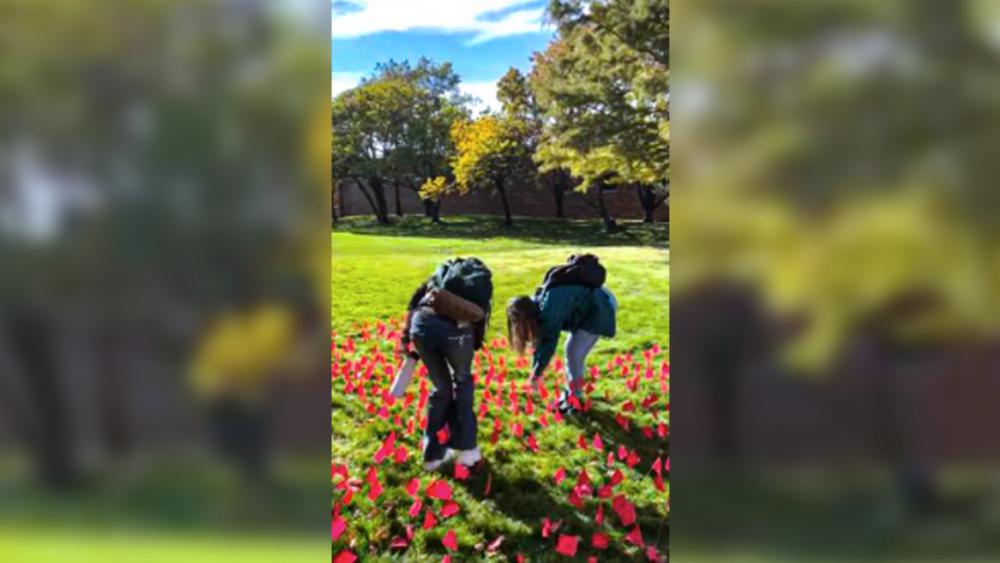 Campus authorities have reportedly launched an investigation after at least two individuals allegedly defaced a pro-life memorial at St. Louis University in Missouri.

A video posted by Students for Life appears to show two women kicking, trampling, and ripping up red flags planted in an effort to remember the lives of the unborn as part of the Cemetery of the Innocents project.

The lawn display, put together by the university’s Students for Life chapter, featured 1,000 flags placed in the shape of a cross. Each flag was meant to represent 800 abortions, according to Live Action.

A student named Nick Baker reportedly noticed the women snatching up the flags, so he approached to ask what they were doing. The conversation that followed was quite tense.

In between defacing the cross of flags, the individuals questioned why pro-life students wouldn’t just leave women alone, argued Baker had “no right to have an opinion” and hurled expletives.

Watch It Below (Caution: Strong Language):

The continued vandalism that followed eventually forced students to take down the display. Here’s another video purportedly showing additional damage at the hands of other students later that night:

The destruction continues into the night… @SLU_Official Our flags keep getting stolen so we had to pack it up for security and will be out bright and early tomorrow. This was an approved display and we should NOT have to take it down! #SLU #gobillikens #prolife #womenbetrayed pic.twitter.com/SeQXuR0KnF

According to Baker, chaos didn’t end with the display coming down. He told Fox News one of the girls who tried to remove the flags approached him a few days later with an allegedly vitriolic tone.

“You’re a disgusting misogynist, and karma is going to f***ing get you. You’ll see that when you die, and hopefully you f***ing go to hell,” the person reportedly said. “You can see my pictures, you can see how pretty I am, how good of a life I have. And what do you have? You’re a f***ing loser. You just really enjoy your life, cause I’ll enjoy mine. And I’ll f***ing keep killing babies.”

College authorities are currently investigating what unfolded and looking for answers.

“The university takes seriously any alleged violation of our community standards, and has policies and processes in place to address concerns when they are reported,” a spokesperson told Fox News.