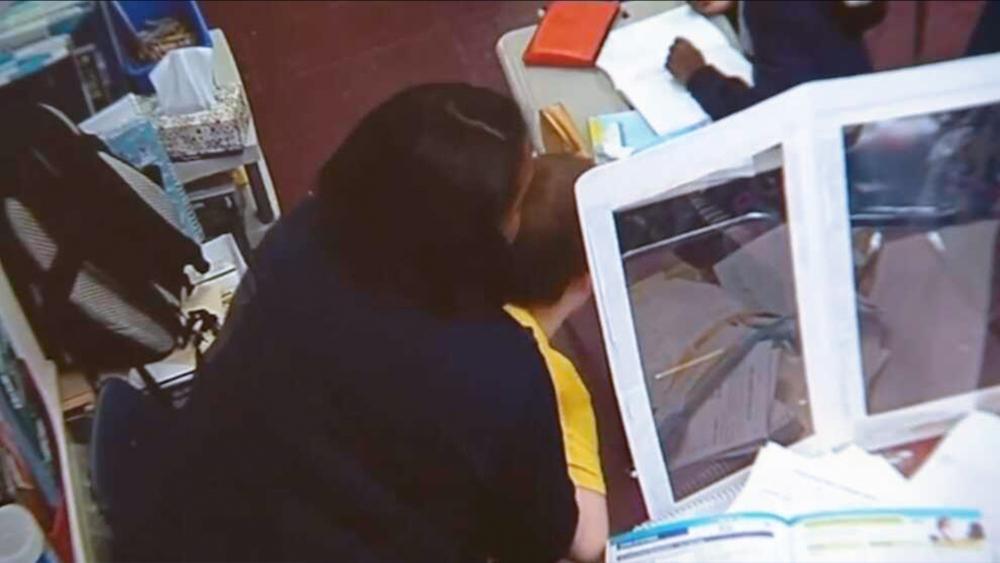 Screenshot from security footage shows teacher JaNiece Jenkins giving the Heimlich maneuver to one of her students who was choking on a plastic bottle cap. (Screenshot credit: WABC-TV)

A New Jersey teacher is being hailed a hero after saving a panicked child who choked on a plastic bottle cap during class.

Security video filmed in the classroom shows the 9-year-old boy trying to get the cap off his water bottle by using his teeth after he failed to open it with his hands — and that’s when the plastic became lodged in his throat.

“I started it with my teeth, and then I was squeezing it a little, and then the water pushed the cap to my throat,” he told WABC-TV.

Robert tried to go to a sink in the classroom to cough the plastic piece out but was unable to do so. He then ran over to Jenkins, who immediately realized, “He needs my help,” and started the Heimlich maneuver.

“He was pointing to his neck, and he’s all flustered,” the teacher told the local news station. “He can’t talk, so then I just turn him around. I perform[ed] the Heimlich maneuver, and here we are.”

After a few moments, the cap popped right out of Robert’s mouth. Jenkins’ quick-thinking actions led to a positive conclusion in what could have been a deadly incident.

Jenkins, who is set to be awarded by Congressman Donald Payne Jr. and East Orange Mayor Ted Green for her heroic act, said she was “relieved” Robert was OK.

“I was relieved that he was OK and he was safe,” she told CBS News. “But then, I’m like, ‘Oh my gosh, did this just really happen?'”

I want to praise JaNiece Jenkins, a teacher at East Orange Community Charter School! When a student began to choke, she performed the Heimlich maneuver immediately and saved the student's life. Jenkins is a true community hero! https://t.co/oatVbVWg2e pic.twitter.com/MtUEQHP4JO

Politicians and the local community continue to praise Jenkins for her amazing act.

“I want to praise JaNiece Jenkins, a teacher at East Orange Community Charter School!” Payne tweeted Monday. “When a student began to choke, she performed the Heimlich maneuver immediately and saved the student’s life. Jenkins is a true community hero!”