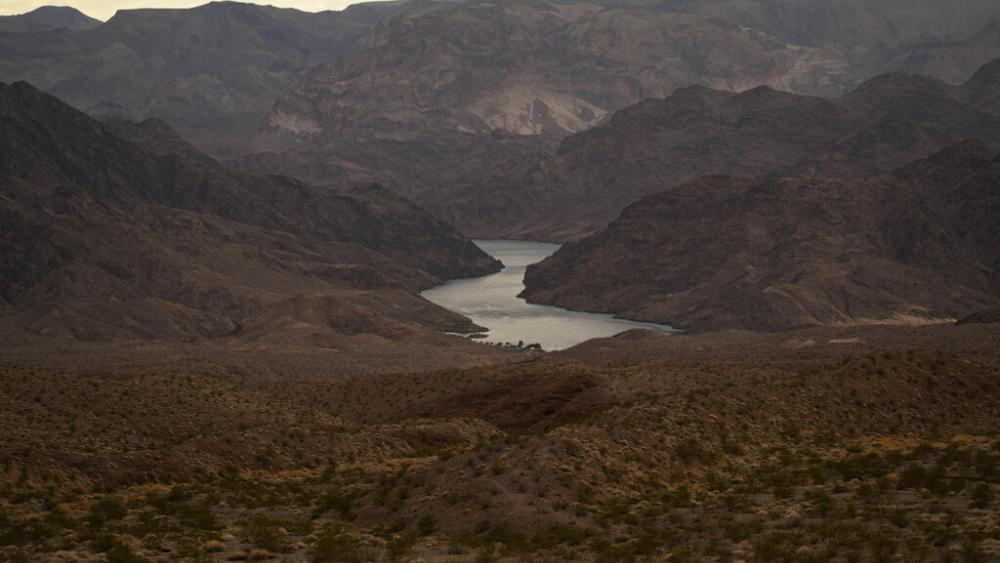 Federal officials on announcing water cuts that would further reduce how much Colorado River water some users in the seven U.S. states reliant on the river and Mexico receive. (AP Photo/John Locher)

SALT LAKE CITY (AP) - For the second year in a row, Arizona and Nevada will face cuts in the amount of water they can draw from the Colorado River as the West endures an extreme drought, federal officials announced Tuesday.

The cuts planned for next year will force states to make critical decisions about where to reduce consumption and whether to prioritize growing cities or agricultural areas.

The cuts will also place state officials under renewed pressure to plan for a hotter, drier future and a growing population. Mexico will also face cuts.

“We are taking steps to protect the 40 million people who depend on the Colorado River for their lives and livelihoods,” said Camille Touton, commissioner of the Bureau of Reclamation.

The river provides water across seven states and in Mexico and helps feed an agricultural industry valued at $15 billion a year. Cities and farms are anxiously awaiting official estimates of the river's future water levels that will determine the extent and scope of cuts to their water supply.

That's not all. In addition to those already-agreed-to cuts, the Bureau of Reclamation said Tuesday that states had missed a deadline to propose at least 15% more cuts needed to keep water levels at the river's storage reservoirs from dropping even more.

For example, officials have predicted that water levels at Lake Mead, the nation’s largest reservoir, will plummet further. The lake is currently less than a quarter full.

“The states collectively have not identified and adopted specific actions of sufficient magnitude that would stabilize the system," Touton said.

After putting last year’s burden on the agricultural industry, Arizona officials will have to decide whether to spread additional pain to growing cities that rely on the river.

The cuts are not expected to have a tangible effect on Nevada, which has already implemented the region’s most aggressive conservation policies, including grass bans and rebate programs.

While the Bureau of Reclamation is “very focused on just getting through this to next year," any cutbacks will likely need to be in place far longer, said University of Oxford hydrologist Kevin Wheeler.

“What contribution the science makes is, it’s pretty clear that these reductions just have to have to stay in place until the drought has ended or we realize they actually have to get worse and the cuts have to get deeper,” he said.

The cuts are based on a plan the seven states as well as Mexico signed in 2019 to help maintain reservoir levels.

Under that plan, the amount of water allocated to states depends on the water levels at Lake Mead. Last year, the lake fell low enough for the federal government to declare a first-ever water shortage in the region, triggering mandatory cuts for Arizona and Nevada as well as Mexico in 2022.

Officials expect the falling lake levels to trigger additional cuts to Nevada, Arizona and Mexico next year. States with higher priority water rights are not expected to see cuts.