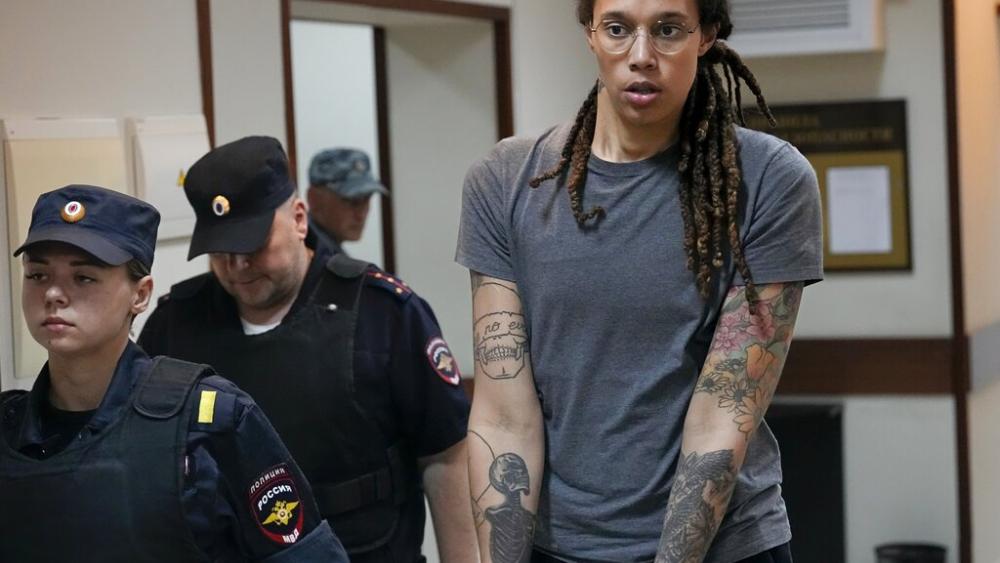 WNBA star and two-time Olympic gold medalist Brittney Griner is escorted from a courtroom after a hearing in Khimki just outside Moscow, Russia, on Aug. 4, 2022. (AP Photo/Alexander Zemlianichenko, File)

The Biden administration has secured the release of American basketball player Brittney Griner in a controversial prisoner swap with the Russian regime of Vladimir Putin.

In exchange for the WNBA star, the U.S. is releasing Russian arms dealer Viktor Bout, also known as "the merchant of death." Many had hoped the administration would also gain freedom for another American, Paul Whelan, who has been jailed for nearly four years in Russia.

Griner, a two-time Olympic gold medalist, was beginning to serve a nine-year sentence on a Russian penal farm, accused of smuggling drugs into Russia after officials found vape canisters with cannabis oil in her luggage.

“She’s safe, she’s on a plane, she’s on her way home," Biden announced from the White House on Thursday morning.

But the fact that the deal was only a one-for-one swap was a surprise given that U.S. officials had for months worked to bring home both Griner and Whelan, a Michigan corporate security executive. Whelan has been held captive by Russia since December 2018 on espionage charges that his family and the U.S. government have said are baseless.

Meanwhile, Viktor Bout is seen as a very dangerous man whose illegal activities could harm U.S. forces. He's a former Soviet Army lieutenant colonel whom the Justice Department once described as one of the world's most prolific arms dealers. Bout was serving a 25-year sentence for selling tens of millions of dollars in weapons that U.S officials said were to be used against Americans.

While the release of Griner is being applauded, critics are calling out President Biden for the message he's sending with this particular prisoner swap.

Former Assistant to the President for National Security Affairs (NSA) Amb. John Bolton tweeted, "The Bout-for-Griner prisoner swap is not a trade, it's an American surrender. This is not what American strength looks like. Terrorists and rogue states are smiling."

The Bout-for-Griner prisoner swap is not a trade, it's an American surrender. This is not what American strength looks like. Terrorists and rogue states are smiling.

Sen. Rick Scott tweeted, "I'm glad Brittney is coming home…but what about U.S. Marine vet Paul Whelan? He's still held by Putin in Russia. For Biden to give Putin a dangerous arms dealer - someone known as the 'Merchant of Death' - is weak & disgusting. Doing so while leaving Paul behind is unforgivable."

I'm glad Brittney is coming home…but what about U.S. Marine vet Paul Whelan? He's still held by Putin in Russia. For Biden to give Putin a dangerous arms dealer - someone known as the "Merchant of Death" - is weak & disgusting. Doing so while leaving Paul behind is unforgivable.

In an exclusive interview, Paul Whelan spoke on the phone with CNN hours after news broke of Griner’s release from the Russian penal colony where he’s being detained.

“I am greatly disappointed that more has not been done to secure my release, especially as the four-year anniversary of my arrest is coming up,” Whelan told CNN while adding he’s happy Griner is now free.

Whelan said he’s treated differently than other detainees, and in 2019 he claimed he’d been assaulted by a prison guard.

“They’ve always considered me to be at a higher level than other criminals of my sort and for whatever reason, I’m treated differently than another individual here from a Western country that’s also on a charge of espionage. So even though we’re both here for espionage, I’m treated much differently than he is, and my treatment is also much different than others held for espionage at other prisons,” Whelan said.

Whelan added that he hopes the Biden administration “would do everything they could to get me home, regardless of the price they might have to pay at this point.”

“I would say that if a message could go to President Biden, that this is a precarious situation that needs to be resolved quickly,” Whelan told CNN.

President Biden claims they haven’t forgotten about Whelan and will keep working to negotiate his release, too.

“This was not a choice of which American to bring home,” Biden said. “We brought home Trevor Reed when we had a chance earlier this year. Sadly but totally illegitimate reasons Russia is treating Paul’s case differently than Brittney’s.”