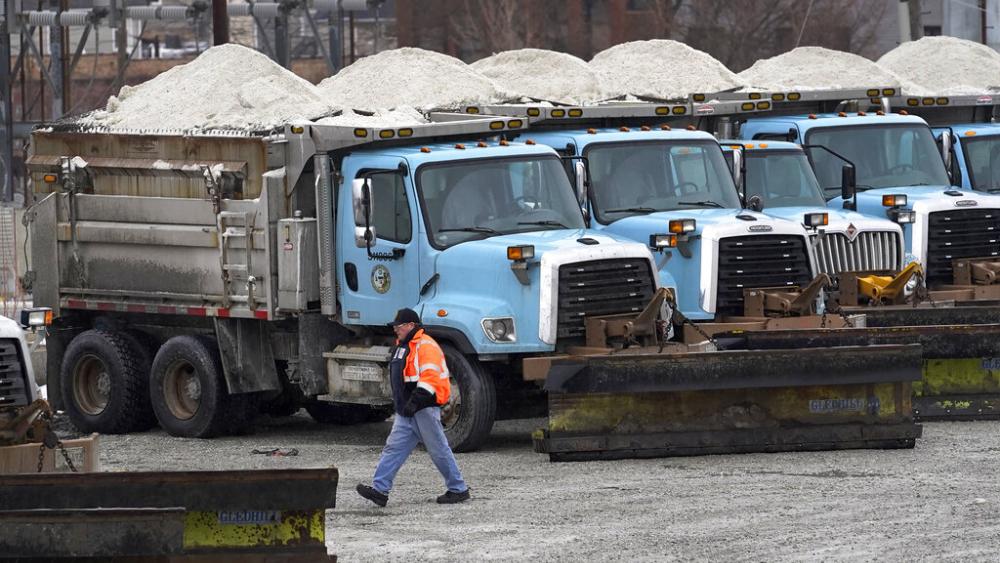 A City of Chicago Department of Streets and Sanitation employee walks from a loaded salt truck to an empty salt truck to be loaded in anticipation of a winter storm Tuesday, Feb. 1, 2022, in Chicago. (AP Photo/Charles Rex Arbogast)

AUSTIN, Texas (AP) — A major winter storm with millions of Americans in its path brought a mix of rain, freezing rain, and snow to the middle section of the United States on Wednesday as airlines canceled hundreds of flights, governors urged residents to stay off roads and schools closed campuses.

The storm had already dropped heavy snow over much of Kansas and parts of Missouri by early Wednesday, with weather forecasters warning that the snow was only expected to intensify throughout the day. More than a foot of snow was expected in parts of central Missouri and Michigan, and up to a foot of snow could fall Wednesday and Thursday in central and northeastern Illinois. Twelve to 18 inches (30 to 45 centimeters) of snow is possible in areas of northern Indiana, said Andrew Orrison, a meteorologist with the National Weather Service in College Park, Maryland.

“For a lot of areas, we are going to be looking at significant amounts of snowfall and also ice,” he said.

“We’re receiving a lot of snow over here in northwest Indiana and it’s the wet, slushy snow that causes treacherous driving conditions to say the least," he said.

Areas south of the heavy snow were expected to see freezing rain, with the heaviest ice predicted along the lower Ohio Valley area from Louisville, Kentucky, to Memphis, Tennessee.

The disruptive storm moved across the central U.S. on Groundhog Day, the same day the famed groundhog Punxsutawney Phil predicted six more weeks of winter. The storm came on the heels of a vicious nor’easter last weekend that brought blizzard conditions to many parts of the East Coast.

The footprint of the storm extended as far south as Texas, where nearly a year after a catastrophic freeze buckled the state's power grid in one of the worst blackouts in U.S. history, Gov. Greg Abbott defended the state's readiness. The forecast did not call for the same prolonged and frigid temperatures as the February 2021 storm and the National Weather Service said the system would, generally, not be as bad this time for Texas.

“No one can guarantee that there won't be any" outages caused by demand on the power grid, Abbott said Tuesday. “But what we will work to achieve, and what we're prepared to achieve is that power is going to stay on across the entire state.”

In November, Abbott had, in fact, made a guarantee for winter: “I can guarantee the lights will stay on," he told Austin television station KTBC.

Abbott, whose handling of last year's blackouts is a top line of attack for Democrats as the Republican seeks a third term in 2022, said thousands of miles of roads in Texas will become "extraordinarily dangerous" over the coming days. Energy experts said the forecast this week, although below freezing, should not pose a challenge for Texas' grid.

No large-scale power outages were reported early Wednesday in Texas or elsewhere, according to poweroutage.us.

Airlines canceled more than 1,400 flights in the U.S. scheduled for Wednesday, the flight-tracking service FlightAware.com showed, including more than three-quarters taken off the board in St. Louis. In an effort to stay ahead of the weather, Southwest Airlines announced Tuesday that it would suspend all of its flight operations Wednesday at St. Louis Lambert International Airport and Thursday at its Dallas Love Field hub. Airports in Chicago, Kansas City, and Detroit canceled more flights than usual.

“Around the country, we’re planning to operate a limited or reduced schedule from some cities in the path of the storm but will make adjustments to the schedule as needed,” Southwest spokesman Dan Landson said.

Missouri Gov. Mike Parson declared a state of emergency as school districts and universities shifted classes to online or canceled them entirely.

Illinois lawmakers canceled their three scheduled days of session this week as the central part of the state prepares for heavy snow, ice and high wind gusts in the region. In Oklahoma, Gov. Kevin Stitt declared a statewide state of emergency as the winter storm approached that would remain in effect for seven days.

On Wednesday and Thursday, the weather service said 8 to 15 inches (20 to 38 centimeters) of snow was possible in parts of Michigan. That includes Detroit, where the mayor activated snow emergency routes and city crews were expected to work 12-hour shifts salting and plowing major roads.

National Weather Service forecasters in Little Rock put their own spin on the Groundhog Day tradition with a photo of their office cat, Tarmac, and the caption: “SHADOWS EVERYWHERE! THE WINTER STORM IS HAPPENING!" 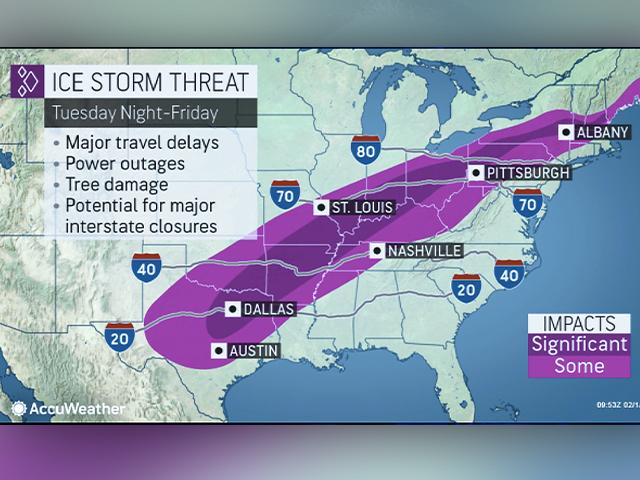 Winter Storm to Bring Snow, Ice Across Wide Portion of US Over Next Several Days
CBN News Email Updates