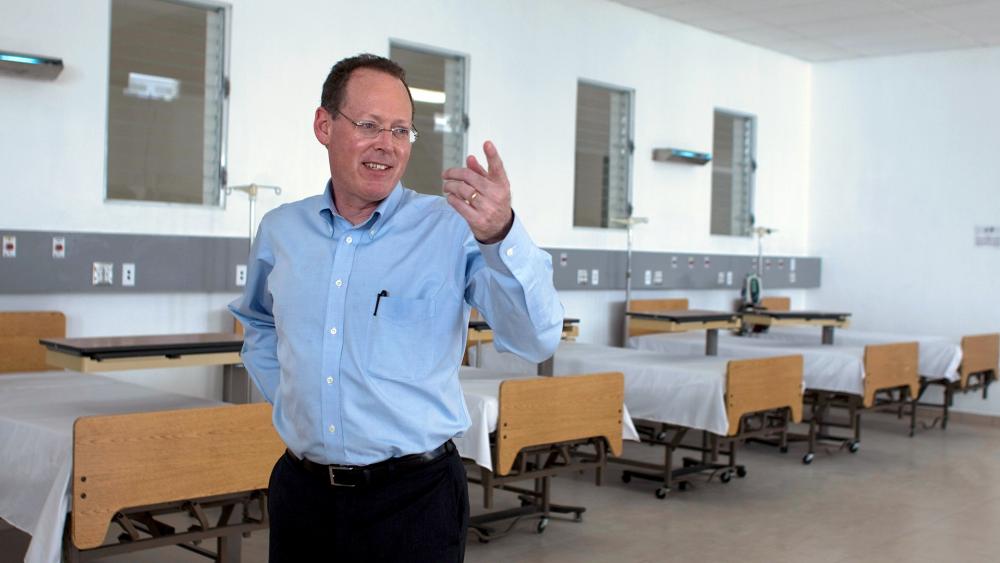 Dr. Paul Farmer, a Christian, physician, humanitarian, and author renowned for providing health care to millions of impoverished people worldwide has died. He was 62.

Farmer co-founded the Boston-based global nonprofit Partners in Health (PiH) which had worked with CBN and Operation Blessing on humanitarian projects in the past. The organization confirmed his death Monday calling it "devastating" and noting he unexpectedly passed away in his sleep from an acute cardiac event while in Rwanda, where he had been teaching.

"Paul Farmer's loss is devastating, but his vision for the world will live on through Partners in Health. Paul taught all those around him the power of accompaniment, love for one another, and solidarity," PiH CEO Dr. Sheila Davis said in a statement.

Farmer was a professor of medicine at Harvard Medical School and chief of the division of global health equity at Brigham and Women's Hospital. He wrote extensively on health, human rights, and social inequality, according to the PiH website.

The dean of Harvard's Faculty of Medicine said Farmer was "among the greatest humanitarians of our time — perhaps all time."

"A compassionate physician and infectious disease specialist, a brilliant and influential medical anthropologist, and among the greatest humanitarians of our time — perhaps all time — Paul dedicated his life to improving human health and advocating for health equity and social justice on a global scale," George Q. Daley, dean of Harvard University's Faculty of Medicine, said in a statement.

He was a member of the American Academy of Arts and Sciences and the Institute of Medicine of the National Academy of Sciences and was awarded the NAS Public Welfare Medal in 2018.

In addition, Farmer authored a number of books, including In the Company of the Poor: Conversations with Dr. Paul Farmer and Fr. Gustavo Gutiérrez; Reimagining Global Health: An Introduction; and To Repair the World: Paul Farmer Speaks to the Next Generation.

His most recent book was released in November 2020: Fevers, Feuds, and Diamonds: Ebola and the Ravages of History.

Partnering with Operation Blessing on Projects in Haiti

Founded in 1987, Partners in Health said its mission is "to provide a preferential option for the poor in health care." Its website states in bold letters, "We refuse to accept that any life is worth less than another."

The organization began its work in Cange, a rural village in Haiti's central plateau, and later expanded its operations to regions including Africa, Eastern Europe, and Latin America.

PiH partnered with CBN's Operation Blessing (OB) on several projects over the years. OB delivered a truckload of hospital equipment to PiH at General Hospital in Port-au-Prince, Haiti in 2010. The equipment was donated by Americans to the charity Missionary Flights International (MFI) specifically for Haiti earthquake relief.

In 2011, The Virginian-Pilot noted Farmer called Operation Blessing "one of the very first, and best led," organizations he worked within the year after the (Haiti) earthquake.

Two years later, Farmer asked OB if they would help provide clean water for a new hospital in Haiti. Bill Horan, former president of Operation Blessing, said, "We jumped at the chance to help our longtime friend."

OB first went to Haiti in the fall of 2009 in order to assist Partners in Health in providing running, potable water at their network of 12 hospitals.

"Paul partnered with CBN's Operation Blessing on several projects around the world," said CBN News Senior International Correspondent George Thomas. "He was a strong believer who had immense compassion and love for the world's destitute."

'Didn't Take No for an Answer'

Michelle Karshan, vice president of a nonprofit prison health care system in Haiti who worked closely with Farmer, said he was determined, innovative and always knew how to get around obstacles and bureaucracy.

"He didn't take no for an answer," she said. "He didn't think anybody was too poor or too illiterate to be entitled to receive health care."

"Paul Farmer changed the way health care is delivered in the most impoverished places on Earth. He saw every day as a new opportunity to teach, learn, give, and serve — and it was impossible to spend any time with him and not feel the same," Clinton said in a statement.

Pulitzer Prize-winning author Tracy Kidder, who wrote the nonfiction book, Mountains Beyond Mountains: The Quest of Dr. Paul Farmer, A Man Who Would Cure the World, told The Associated Press the two traveled together for a month as Farmer treated prisoners and impoverished people in Haiti, Moscow and Paris.

"He was an important figure in the world," Kidder said. "He had a way of looking around corners and of connecting things. He couldn't obviously go and cure the whole world all by himself, but he could, with help of his friends, give proof of possibility."

One of Kidder's strongest memories of Farmer occurred in Peru where the doctor was treating patients with multi-drug-resistant tuberculosis. Kidder recalled a woman wearing a Mickey Mouse shirt who followed them to their car, looking very shy.

With her head down, she said, "Thank you," to Farmer in Spanish. Kidder recalled, "Paul turned, took each of her hands in his and said, 'For me, it is a privilege,' in Spanish."

Farmer is survived by his wife, Didi Bertrand Farmer, and their three children.

Funeral arrangements have not been announced.