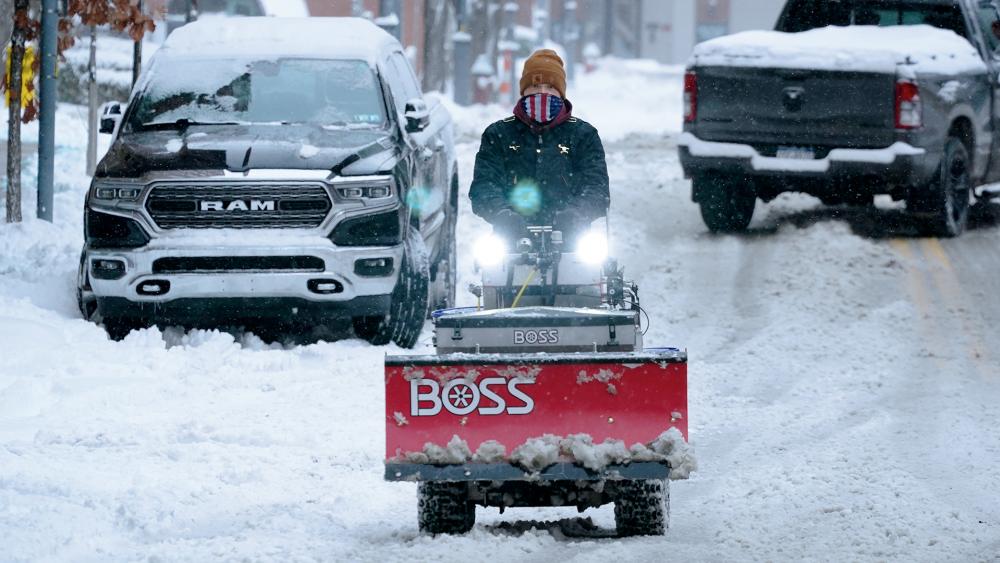 A worker drives a sidewalk snow plow down the middle of a street on Pittsburgh's Northside on Monday, Jan. 17, 2022. (AP Photo/Gene J. Puskar)
6292399168001
Snow, Ice, and Tornadoes: Winter Wallop Strands Travelers and Knocks Out Power Across East Coast

Snow, ice, rain, and even tornadoes have swept across this U.S. as a massive storm slammed the South and Northeast this week packing a wallop.

The huge winter storm left nearly two feet of snow in the Carolinas and more than a foot in parts of the Northeast. Now, with Arctic air hitting the region, there's concern about freezing roads.

Millions of Americans are feeling the impact with tens of thousands of people out of power from North Carolina to Maine.

The winter storm system especially pummeled Cleveland, Ohio, upsetting drivers trying to dig out. "Look at me. I'm all stuck here. I don't appreciate this. I don't," one frustrated driver said.

Meteorologists said a foot or more of snow fell in parts of Ohio, Pennsylvania, and New York state through Monday. And up to 20 inches of snow fell in the North Carolina mountains. The system also hit the Tar Heel state with dangerous ice.

Many drivers near Raleigh's airport fought to stabilize their cars on the road. In Durham, a tractor-trailer slid off a frozen overpass. The driver had to be rushed to the hospital.

In Nash County, the storm turned deadly when at least two people were killed after their car careened off I-95.

In Florida, the same system produced tornadoes, including an EF-2 in Fort Myers. The destructive winds wreaked havoc on a mobile home park.

Fort Myers resident Roger Ratigan was stunned. "This happened so fast it was just unbelievable," he said.

Meanwhile, a new batch of Arctic air is predicted to push southward over the Plains. That could lead to another winter storm on the Atlantic coast later Friday and Saturday.