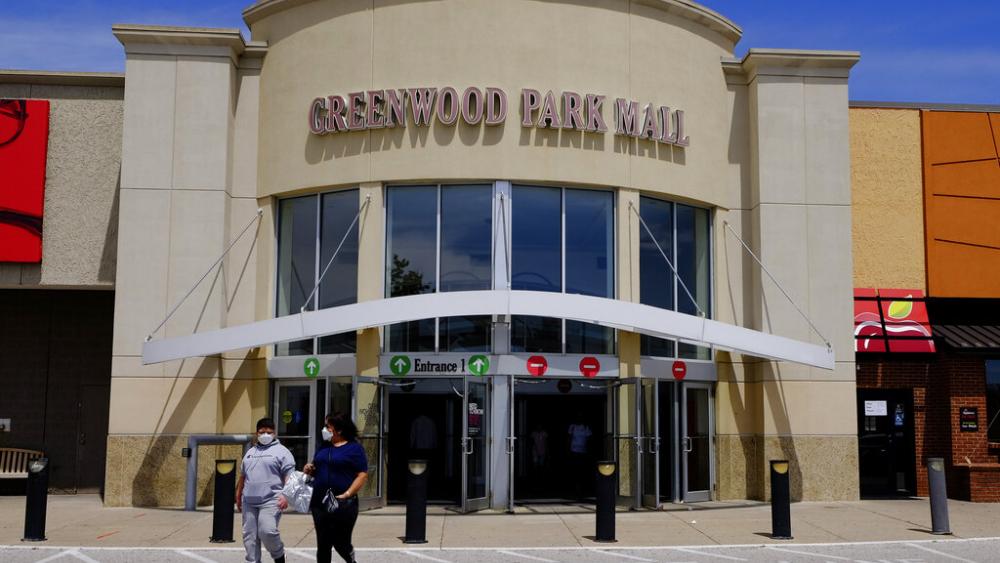 Shoppers leave the Greenwood Park Mall on May 4, 2020, in Greenwood, Ind. where several people were killed at a shooting on Sunday, July 17, 2022. (AP Photo/Darron Cummings, File)

An armed civilian in Indiana is being hailed as a hero for stopping a mass shooting at a local mall Sunday evening.

Three people were fatally shot and two wounded at the Greenwood Park Mall after a man carrying a rifle and several magazines of ammunition opened fire in the food court around 6:00 pm Eastern time.

Greenwood Police Department Chief Jim Ison told a news conference a 22-year-old from nearby Bartholomew County, who was legally carrying a firearm at the mall, shot and killed the gunman.

"The real hero of the day is the citizen who was lawfully carrying a firearm in that food court and was able to stop the shooter almost as soon as he began," Ison said.

"This has shaken us to our core. This isn't something we've seen in Greenwood before. It is absolutely horrendous," the police chief said.

According to ABC News, the civilian who stopped the gunman was Elisjsha Dicken, of Seymour.

The hero who took down the mass shooter in the Greenwood, Indiana mall last night

He was legally carrying under under Indiana's Constitutional Carry law. pic.twitter.com/ZxDT0GzC11

“Many more people would have died last night if not for a responsible armed citizen,” said Chief Ison.

Police also confiscated a suspicious backpack that was in a bathroom near the food court.

"I'm not going go into detail with the contents that were found in the backpack," Ison said. "That's still being processed. There was no explosive device, which was our primary concern in a situation like this."

The two people who were wounded included a 12-year-old girl, who suffered a minor injury to her back and was treated at a local hospital, according to WTHR-TV.

People inside the mall told the outlet they heard 20 gunshots in the food court.

A news conference with authorities was scheduled for Monday afternoon to provide updates.

Indianapolis Metropolitan Police and multiple other agencies are assisting in the investigation.

Greenwood is a south suburb of Indianapolis with a population of about 60,000. Mayor Mark Myers asked for "prayers to the victims and our first responders."

"As of now, we don't know the shooter's identity or motive," Myers said in a statement. "We do know that someone we are calling the 'Good Samaritan' was able to shoot the assailant and stop further bloodshed. This person saved lives tonight. On behalf of the City of Greenwood, I am grateful for his quick action and heroism in this situation."

Greenwood Park Mall said in a statement that it grieves for the victims and praised first responders as well as the "heroic actions" of the 22-year-old who police said fatally shot the gunman.

"Violence has no place in this or any other community," the mall said.

In a tweet, conservative radio host Todd Starnes commented on the shooting, noting: "This is why we have a Second Amendment."

This is why we have a Second Amendment.https://t.co/owI4GT62j5