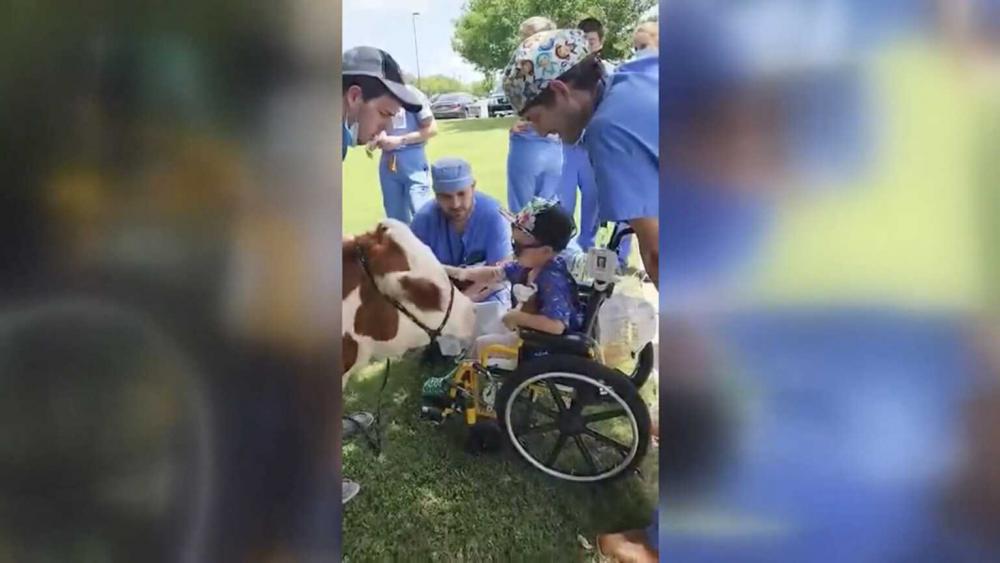 Doctors are calling one central Texas boy’s incredible recovery “nothing short of a miracle” after a critical farm accident left the 4-year-old with serious injuries to his leg and small intestine.

Kutter Shed was admitted to McLane Children’s Hospital in Temple, Texas, on April 13, according to KWTX-TV, and has since undergone nine surgeries due to the severity of his injuries. The horrific accident — the details of which have not been disclosed — left Kutter unable to walk or eat solid foods.

Since being released to go home June 16, the little boy has far surpassed doctors’ expectations. He is now not only walking, but running, eating solid food once again, and is regaining the weight he lost.

A great deal of his profound recovery is certainly creditable to the love he has received from the farming and roping community in Moody, Texas. In fact, when doctors noticed Kutter — who has been roping livestock since was three years old — was feeling depressed, medical personnel organized an event to bring livestock to the front of the hospital to lift the little guy’s spirits.

“The doctors said, ‘What can we do to boost his spirits?’ And he asked, ‘Can we bring his dogs?'” Kutter’s mom, Amber, recalled during a June interview. “And I said, ‘No. Can we bring his heifers?’ And [the doctor] said, ‘Done deal.’ I was like, ‘Are you kidding?'”

That was exactly what Kutter needed to brighten his mood. As hospital staff lined the parking lot, the little boy — rolled out in a wheelchair — was beaming when he saw his three mini heifers: Minnie, Little Foot, and Ducky.

“They mean so much to Kutter,” Amber said of her son’s love for his cows. “They’re more than just cattle to Kutter. Those are his babies.”

The community has also come together to raise thousands of dollars to pay Kutter’s medical bills.

One of the biggest acts of kindness, the Tough Kutter Team Roping Event, was held early this month at a nearby arena and at no cost to the Shed family.

“We raised lots of money and are so thankful for the community that took their time to come out and support such a great cause,” Amber said.

In a separate video, Amber thanked friends, family, and strangers for their care for her young son, telling them, “Your thoughts and prayers have been heard.”

As for Kutter, he may still be recovering, but he’s already with his cows again. He took home the prize for reserve champion for his heifer Ducky at a competition in Waxahachie on July 3.