July 4th Suspect Charged, IL Rep. Says Mass Shooting Spiritual Problem: 'It's What Happens When You Turn Away from God' 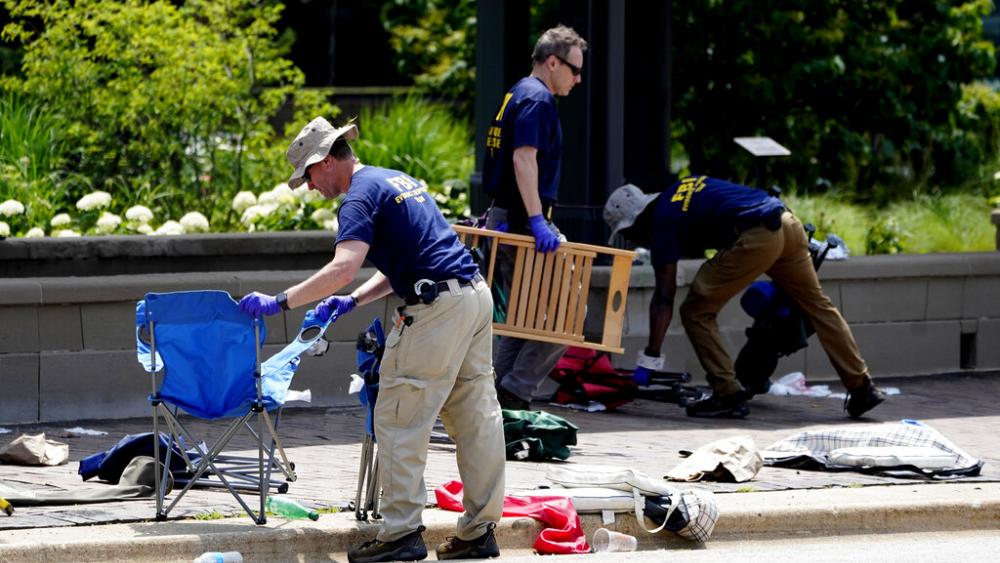 Stunning new details are emerging about the suspect charged in the deadly shooting at a July Fourth parade near Chicago. We're also learning more about the victims of the tragedy.

Police say he also dressed in women's clothing to conceal his facial tattoos and his identity to help him escape. "He walked to his mother's home who lived in the area, and he blended right in with everybody else as they were running around almost as if he was an innocent spectator as well," Covelli explained.

The 21-year-old has now been charged with seven counts of first-degree murder. "This is the first of many charges for Mr. Crimo," said Eric Rhinehart, Lake County State's Attorney.

Crimo opened fire at the parade in Highland Park, a suburb 30 miles north of downtown Chicago. Police say he used a ladder to climb to the roof of a building, where he fired off seventy rounds, wounding 40 people and immediately killing six. A seventh victim died later at a hospital on Tuesday.

The grieving community is remembering the lives of those who were lost.

Kevin and Irina McCarthy had taken their young son Aiden into town for the annual parade. The child was found under his 37-year-old father's body.

"How do you tell an 18-month-old boy that mommy and daddy are in heaven now. There's... there are no words," said Adrienne Rosenblatt, a neighbor of the McCarthy family.

A GoFundMe set up for the boy has raised more than $2 million.

Jackie Sundheim was a teacher at her local synagogue. "She just had a smile on her face all the time," said friend Howard Miller. "She was probably the last one out of here every night and just couldn't find a lovelier person."

Nicholas Toledo, 78, was a dual citizen of the U.S. and Mexico. And 88-year-old Steve Straus's family told the New York Times that he still took the train to Chicago every day to his job as a financial adviser.

Officials say the suspect was known to police. In April 2019, officers were called to his home after he attempted suicide. The matter was handled by mental health professionals.

Five months later police were called again after he threatened to kill his family. "A family member reported that Crimo said he was going to kill everyone and Crimo had a collection of knives," said Covelli. "The police removed 16 knives, a dagger and a sword from Crimo's home."

Officials said he also posted a series of disturbing and violent posts and videos on social media. One post reportedly included a route to the July 4th parade.

Still, Crimo was able to purchase at least five firearms, including the rifle used in the attack. Some are saying the state's red flag laws should have prevented the mass shooting.

Vice President Kamala Harris renewed calls for a ban on assault weapons. "We need to end this horror," Harris said during a visit near Highland Park. "We need to stop this violence. And we must protect our communities from the terror of gun violence."

In an interview with CBN News, Rep. Adam Kinzinger (R-IL) whose district is not far from Highland Park, said the problem is deeper than guns.

"We have a problem in this country with the heart, and there can be no doubt about that," said Kinzinger. "The fact that somebody would take any weapon, whether it's an AR-15, a car, poison, anything and take somebody's life. It's what happens I guess when you turn away from values, turn away from God."

Meanwhile, police are still searching for a motive in the shooting. Crimo is set to appear in court Wednesday.