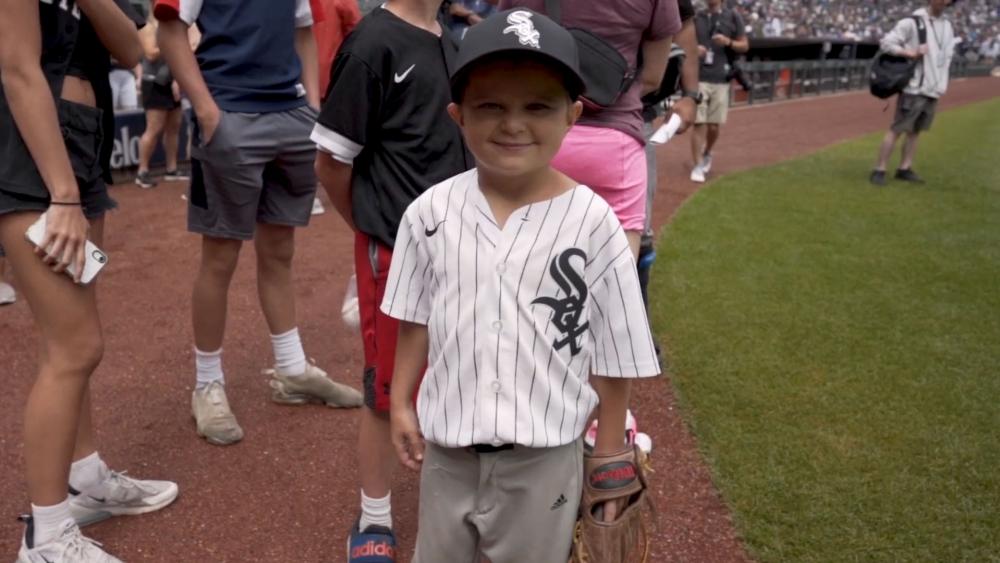 According to MLB.com, Beau Dowling was diagnosed with neuroblastoma as a toddler and doctors recently discovered that he has thyroid cancer. He's endured stem cell transplants, along with several rounds of chemotherapy, radiation, and immunotherapy.

The young fan threw out the first pitch and gave the "play ball" call over a microphone ahead of Chicago's game against the Baltimore Orioles at Guaranteed Rate Field on Saturday.

The White Sox stood on the third-base line and the Orioles lined up on the first-base line as Dowling stepped to the plate. After a smooth swing, the boy gave low-fives and high-fives to players as he circled the bases.

One video of the heartwarming moment has gone viral on Twitter with more than 2 million views.

This little boy was diagnosed with neuroblastoma & got to run the bases today.

Both MLB teams were out of the dugout & cheering him on.

Baseball is just the best.

White Sox manager Tony La Russa waved and tipped his hat at Beau as he ended the run.

Beau's mother, Meg Dowling, told MLB that it was an exciting event for the whole family who have recently had their share of health scares. Her 17-year-old daughter Ella is currently battling ovarian cancer.

"Oh my gosh. Yes. For all of us," Meg said. "Even my big kids were like, the oldest is 21, they were just in awe. Everywhere we turn was like a surprise and just an emotional rollercoaster. It was awesome."

Today we welcomed 7-year-old Beau Dowling for an ultimate day!

Diagnosed with high-risk neuroblastoma as a toddler, Beau battled through stem cell transplants as well as several rounds of chemotherapy, radiation and immunotherapy. He recently was diagnosed with thyroid cancer. pic.twitter.com/Y2jvcKh9UE

Baltimore's Trey Mancini, who beat colon cancer, met Beau and his family during the special event.

"I wanted to go over there after he ran the bases and just tell him that he was awesome," Mancini said. "I told him that I had cancer two years ago and I'm doing just fine now. And I know the same thing is gonna happen to him too. I just wanted him to know that."

Beau's father, Jim Dowling, says his son is a fighter and hasn't given up.

"He's gone through a lot ever since a year and a half, his third go-around with cancer," Jim said. "He's just a fighter and today is just a beautiful day for our family and we are proud to be here and celebrate."