Police Tell Dad His Daughter Was Killed in a Crash, but They Were Wrong: 'Thank You, Jesus' 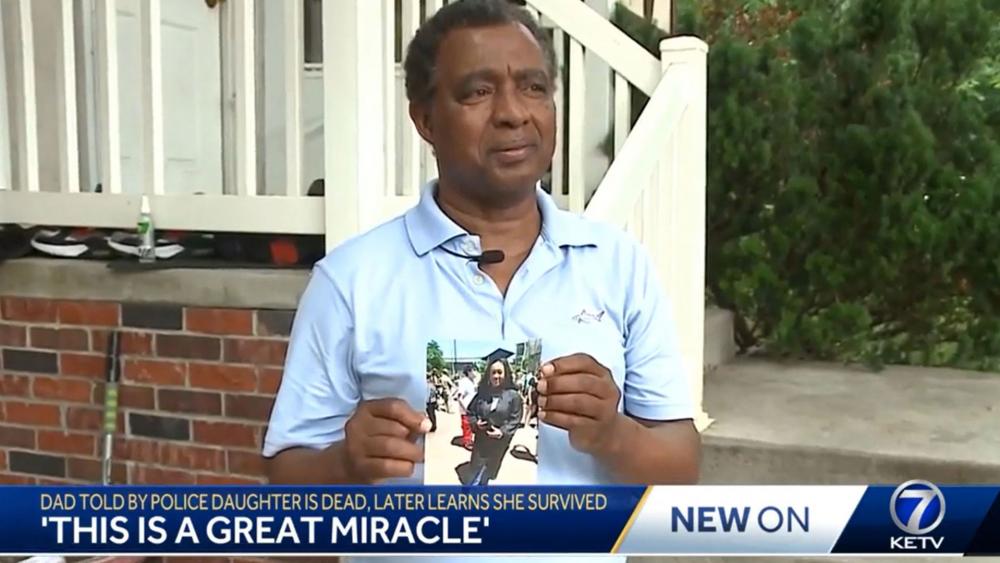 After being told by police that their daughter had been killed in a car accident, a father and his family fell down on their knees and prayed. A few hours later, their prayers were answered when word came that the police had been wrong, their daughter was alive.

Hannah Wadiso, 18, was one of the survivors of an automobile crash that killed two people and injured 20 others on Memorial Day weekend in Lincoln, Nebraska, KETV reports. An 18-year-old man has been arrested for the accident after an investigation, deemed to have been high on marijuana during the accident.

Tesfaye Alibe, Wadiso's father, told the outlet that she had just graduated from Lincoln Southeast High School on May 28. Then, the next day, his daughter asked if she could go watch a car race on O Street.

"Be careful," Alibe told her. But his father's intuition told him something was off.

"My heart didn't settle down. I simply followed them, went all the way to the Hy-Vee area, and walked around, and I didn't see them, so I came home," Alibe told KETV.

Then, a few hours later, the telephone rang and Alibe answered. The call was from a person who had helped pull Hannah out from under one of the cars.

"You don't know me, but your daughter is in accident and is in bad shape," the caller said.

Alibe rushed to the accident scene where he was told by a police officer that his daughter was dead, killed by a car that had rolled over her.

"On the road, we cried, fell down on our knees, prayed," Alibe told KETV.

A few hours later, he got another telephone call informing him his daughter was actually alive. She was in critical condition in a local hospital, but alive. A car had flipped over on her, but some bystanders had lifted the vehicle off her.

Alibe said after several days in the hospital, Hannah opened her eyes.

"Amen, hallelujah, thank you, Jesus, this is a chance," he told his daughter, who cried. "It's a chance God gave you, daughter, be happy, don't be angry."

"The other two didn't get this chance you are the lucky one," Alibe said.

Hannah suffered from a crushed pelvis, but her family believes she'll fully recover, according to KETV.

Alibe told the outlet he was disappointed with the young driver's actions, but feels no hatred towards him. The father said he's now focused on his daughter and her second chance at life.

"God is good," he told the station.

Last week in a Facebook post, Lincoln Police Chief Teresa Ewins told her followers about the "tragic misunderstanding" regarding Alibe and his daughter.

"We want to share with you some information I was just made aware of yesterday afternoon regarding the devastating Memorial Day weekend crash here in Lincoln that has since been reported on by the media," she wrote.

Chief Ewins explained the terrible error that took place regarding Alibe and his daughter.

"While evaluating our response to the fatal crash that occurred at 52nd and 'O' Street on Sunday, May 29th we discovered a devastating miscommunication with a family member at the scene," the post continued.

"The family member, Tesfaye Alibe, was called to the scene by a bystander who told him his daughter, Hannah, was hit by a vehicle.  When Mr. Alibe arrived, he ran to one of the cars involved in the crash, pointed to one of the deceased, and told the officers it was his daughter.  The officers, who had just been performing life-saving measures, confirmed she had not survived," the post noted.

"Mr. Alibe stayed on scene with officers and as additional information was gathered on his daughter it was determined she was not one of the young women killed in the vehicle. Hannah was one of the bystanders injured in the crash and had been taken to the hospital where she was in critical condition with life-threatening injuries," the chief wrote.

"We recognize the grief this tragic misunderstanding caused for all involved. We continue to work with Mr. Alibe and have acknowledged our sincere regret. We are grateful to report Hannah's condition is improving and hope for the continued improvement of the 19 additional victims," the post concluded.

A GoFundMe page has been set up for Hannah Wadiso's medical bills.