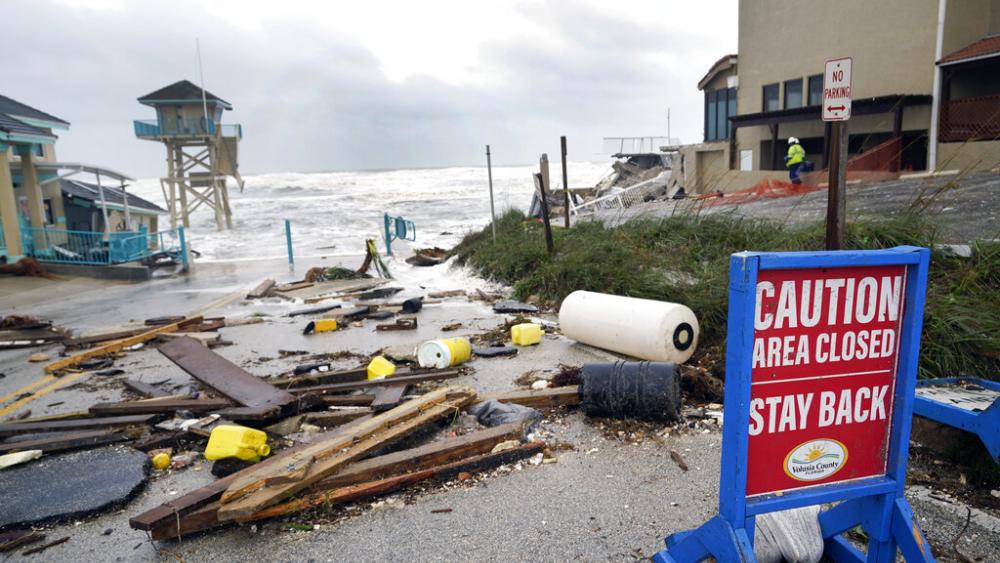 After battering the Florida coast with 75 mph winds and powerful waves, Tropical Storm Nicole is now bringing heavy rain and storms to parts of the southeastern U.S.  The latest round of destruction comes almost a month after Hurricane Ian left a path of utter devastation across the state.

"It's just exhausting, too close together," said one Florida resident.

Nicole is the first November hurricane to make landfall along Florida's Atlantic coast since 1935. Heavy winds, rain, and storm surge wreaked havoc, killing at least five, leaving many without a home. Much of the state is still overwhelmed by September's Hurricane Ian.

"And the water is coming right up to the windows, and it sounded just like a freight train going by and it never stopped," said Pat Keefer, who was visiting Vero Beach when it made landfall.

"We've heard people say you should not build on a cliff, there weren't cliffs here," said another Florida resident. "These were walkable. So again, you had a ton of space. So this is just, it's just absolutely devastating."

Nicole came bearing down on Vero Beach Thursday night as a category one hurricane, the first to make landfall in November in decades. The storm dropped half a foot of rain, causing major flooding. At least 50,000 customers are without power.

CBN's Operation Blessing was already on the ground – still cleaning up from Hurricane Ian.

"We still have active volunteers, work taking place – working on homes with tarping, debris removal and some of the jobs were also removing wet drywall," said OB's Anthony Lloyd.

Teams are now on standby, helping with any needs following this storm.

"We just did an emergency meal kit for a volunteer event on Monday – so we have over 20 pallets of food that we can hand out as well," Lloyd said. "These are kits that have non-perishable food. There's enough food in this box for a family of 4 to have breakfast, lunch, and dinner for three days."

Florida officials warn the ground and sea wall remain unstable, with more collapses to come. Nicole is now a tropical depression, moving North through Georgia. It threatens to bring tornados, flash floods, severe thunderstorms, and heavy rain into the Carolinas.

You can help Operation Blessing in their disaster relief efforts. Click HERE to give now.

You can also write to us at CBN Center, Virginia Beach, Virginia, 23463. Just put "disaster relief fund" in the memo line of your check.