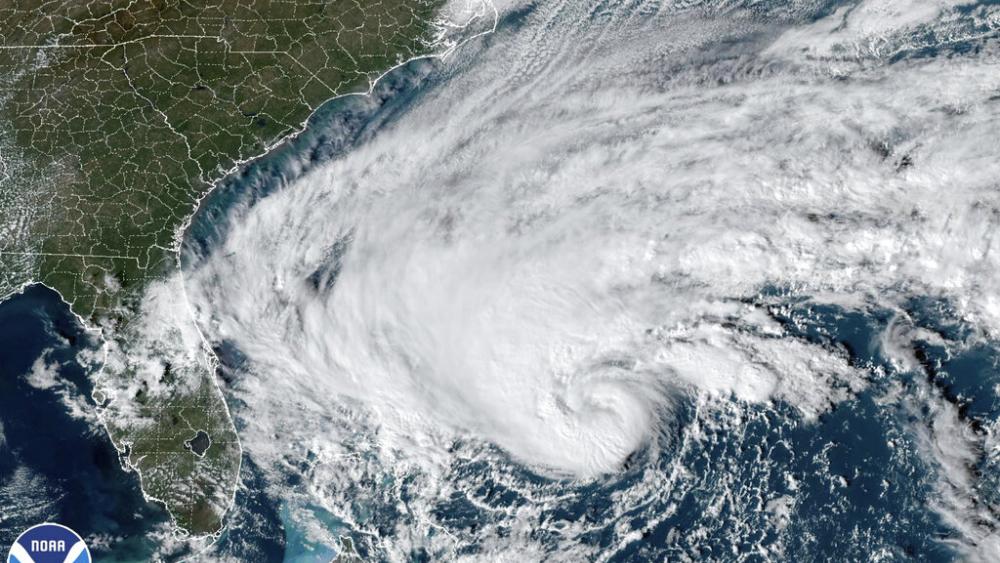 MIAMI (AP) - Tropical Storm Nicole forced people from their homes in the Bahamas and threatened to grow into a rare November hurricane in Florida on Wednesday, shutting down theme parks and airports while prompting evacuation orders that included former President Donald Trump's Mar-a-Lago club.

Hundreds of people sought shelter in the northwestern Bahamas before the approaching storm, which had already sent seawater washing across roads on barrier islands in Florida.

“We are forecasting it to become a hurricane as it nears the northwestern Bahamas, and remain a hurricane as it approaches the east coast of Florida," Daniel Brown, a senior hurricane specialist at the Miami-based National Hurricane Center, said earlier Wednesday.

Nicole is the first storm to hit the Bahamas since Hurricane Dorian, a Category 5 storm that devastated the archipelago in 2019, before hitting Florida.

In the Bahamas, officials said that more than 520 people were in more than two dozen shelters. Flooding and power outages were reported in Grand Abaco.

Authorities were especially concerned about a large Haitian community in Great Abaco that was destroyed by Dorian and has since grown from 50 acres (20 hectares) to 200 acres (80 hectares).

“Do not put yourselves in harm’s way,” said Zhivago Dames, assistant commissioner of police information as he urged everyone to stay indoors. “Our first responders are out there. However, they will not put their lives in danger.”

In Florida, the St. Lucie County Sheriff’s Office said in a tweet that storm surge from Tropical Storm Nicole had already breached the sea wall along Indian River Drive, which runs parallel to the Atlantic Ocean. The Martin County Sheriff's office also said seawater had breached part of a road on Hutchinson Island.

Mar-a-Lago, Trump’s club, and home, is in one of those evacuation zones, built about a quarter-mile inland from the ocean. The main buildings sit on a small rise that is about 15 feet (4.6 meters) above sea level and the property has survived numerous stronger hurricanes since it was built nearly a century ago. The resort’s security office hung up Wednesday when an Associated Press reporter asked whether the club was being evacuated and there was no sign of evacuation by early afternoon.

There is no penalty for ignoring an evacuation order, but rescue crews will not respond if it puts their members at risk.

Disney World and Universal Orlando Resort announced they were closing early on Wednesday and likely would not reopen as scheduled on Thursday.

At a news conference in Tallahassee, Gov. Ron DeSantis said winds were the biggest concern and that significant power outages could occur, but that 16,000 linemen were on standby to restore power, as well as 600 guardsmen and seven search and rescue teams.

“It will affect huge parts of the state of Florida all day,” DeSantis said of the storm’s expected landing.

Almost two dozen school districts were closing schools for the storm and 15 shelters had opened along Florida’s east coast, the governor said.

Forty-five of Florida’s 67 counties were under a state of emergency declaration.

Bahamas Prime Minister Philip Brave Davis, who is at the COP27 U.N. Climate Summit, drew attention to the link between storms and climate change.

“There have always been storms, but as the planet warms from carbon emissions, storms are growing in intensity and frequency,” he said. “For those in Grand Bahama and Abaco, I know it is especially difficult for you to face another storm,”

Tropical storm force winds extended as far as 460 miles (740 kilometers) from the center in some directions.

It could intensify into a rare November hurricane before hitting Florida, where only two have made landfall since recordkeeping began in 1853 - the 1935 Yankee Hurricane and Hurricane Kate in 1985.

New warnings and watches were issued for many parts of Florida, including the southwestern Gulf coastline which was devastated by Hurricane Ian, which struck as a Category 4 storm on Sept. 28. The storm destroyed homes and damaged crops, including orange groves, across the state. - damage that many are still dealing with.

In Florida, the “combination of a dangerous storm surge and the tide will cause normally dry areas near the coast to be flooded by rising waters moving inland from the shoreline," the hurricane center said.

Hurricane specialist Brown said the storm will affect a large part of the state.

“Because the system is so large, really almost the entire east coast of Florida except for the extreme southeastern part and the Keys is going to receive tropical storm force winds," he said.

The storm is then expected to move across central and northern Florida into southern Georgia on Thursday, forecasters said. It was then forecast to move across the Carolinas on Friday.

“We are going to be concerned with rainfall as we get later into the week across portions of the southeastern United States and the southern Appalachians, where there could be some flooding, flash flooding with that rainfall," Brown said.

Early Wednesday, President Joe Biden declared an emergency in Florida and ordered federal assistance to supplement state, tribal and local response efforts to the approaching storm. The Federal Emergency Management Agency is still responding to those in need from Hurricane Ian.

Denny DeHaven, who works for a Social Security advocacy group, said he lives inland so he’s not too concerned.

“It’s only going to be a Category 1 - the thing I mostly worry about is a power outage,” he said. “The people I worry about are those who live around here after seeing what happened in Fort Myers.” Hurricane Ian brought a storm surge of up to 13 feet in late September, causing widespread destruction.