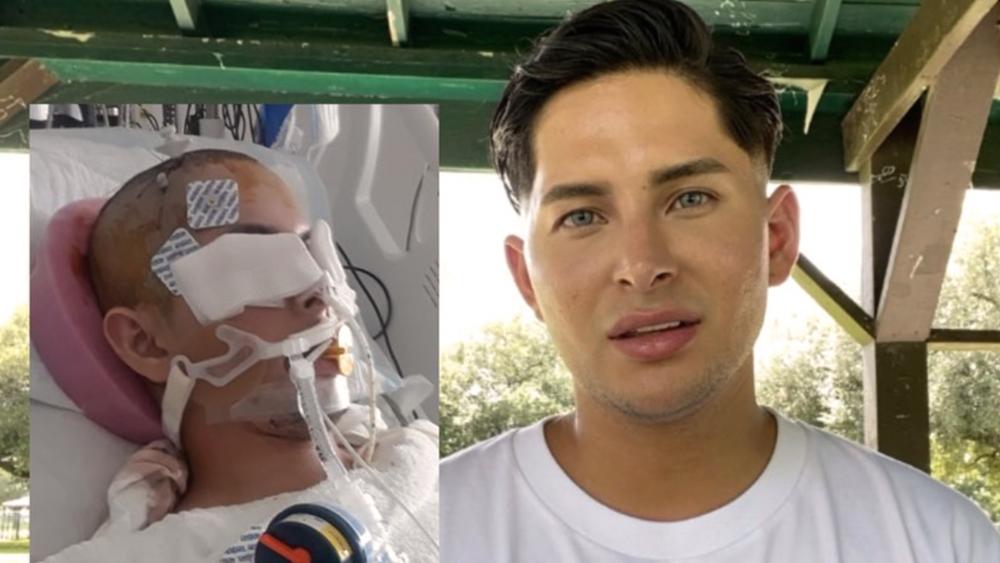 A celebrity makeup artist is sharing how God healed him, saved him, and set him free from homosexuality after suffering from a life-threatening traumatic brain injury that left him in a coma for nearly four weeks.

"I am a miracle and was given a second chance," Samuel Rauda said on YouTube. "I thank God for loving me unconditionally!"

The former makeup artist to the stars grew up in a Christian home but decided early on he wanted nothing to do with God.

"It wasn't until I was in high school that I allowed the enemy to take control of my thoughts and actions. It was like an inner battle," Samuel shared. "I was in church, but not in church. There were many battles and I began to rebel against God."

Rauda admitted that he started experimenting with drugs and also struggled with an addiction to pornography.

"I was hanging out with the wrong people at the wrong time. No one was going to stop me. I was living my life according to me," he explained.

The Texas native decided after graduating that he wanted to become a makeup artist. He packed his bags and moved to Los Angeles, but shares that his addiction to drugs and partying only became worse.

"We went to clubs, parties, a lot of hotspots in LA. [I] tried many different drugs for fun, at first. But soon I developed an addiction to LSD, Cocain[e], weed, shrooms, ACID, e-cigarettes, etc. I needed more drugs and alcohol."

His hunger for fame and success drove him to be one of the go-to makeup artists for Kylie Jenner, Lisa Rinna, and other celebrities.

Despite his fast-paced lifestyle, he kept in touch with his parents who always took the opportunity to share God's truth.

"I couldn't understand why I felt an emptiness inside and yet I didn't want anything of God. During the seven years that I was away from my home my parents always shared the Word of God with me and I knew that they were always praying for me. They never turned their backs on me, even though they didn't agree with the way that I was living my life."

"Even though I was living a sinful life away from God, I still experienced His mercy," he added.

In 2021, Samuel fully embraced a homosexual lifestyle sharing with his more than 250,000 Instagram followers that he loved who he had become.

"It's taken me this long to fully accept myself," he wrote at that time.

But two months later a freak accident would change the course of his life.

Samuel's father called him a week before a trip to Miami to tell him he felt something bad was going to happen.

"I brushed it off and told him I was going to have a good time," he recalled.

After late-night dinner and drinks, Rauda said he was dancing on a crowded golf cart. It was later reported that he "flew off a moving vehicle" and hit his head on the pavement.

Rauda was unconscious for a few minutes and his friends at that time took him to a hotel where he began to vomit blood and complain of a headache. The hotel staff called 911.

He was transported to Mount Sinai Medical Center.

A neurosurgeon at that facility shared on YouTube that Samuel had multiple traumas to the head.

Smith said he had to remove part of Samuel's skull to drain the blood, but he realized that his brain was bruised and started to swell.

"This is the most dangerous part of someone sustaining a big hit to the head," he added. "If we are not able to control the swelling then this is not compatible with life and this is what most people die from."

Dr. Smith was able to relieve some of the swelling, but Samuel remained unstable. He suffered from a stroke and several infections while in the hospital.

During that time, his family was praying.

A week later, Samuel began to show signs of improvement. Four weeks after that, he was moved off the ventilator. One month after that he was sent home.

But Samuel tells his followers that despite his rapid improvement, he refused to give his life over to God.

"I was happy to go home, but my heart was still on my career as a makeup artist," he said. "I remember my dad would attempt to give me the Word of God and have a conversation with me as a son, but for some reason, I began to feel a strong resentment towards my father. So I didn't want to hear anything about God."

And one night Samuel says he finally cried out to God.

Samuel recalls waking up the next day feeling completely changed.

"I gave my life to Christ and this is the best decision that I have ever made," he expressed. "The burden had been taken off my shoulders. I was free from all the sins I had committed. For many years the devil had tried to destroy my life, but now I see how God was always there for me."

Samuel ended the video by inviting people to give their lives to the Lord and prayed for his viewers.

"I was looking at other religions and I didn't find any happiness in that. I now have found the true happiness that God gives," he explained. "God wants to save you. He wants to reach out to you."