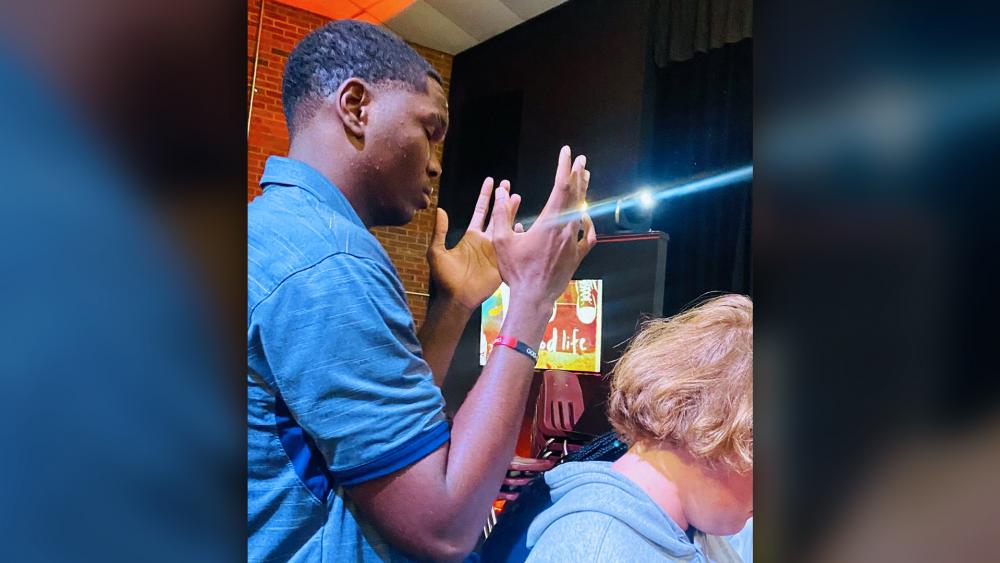 A North Carolina Christian School administrator says parents are "extending grace" after more than 100 students were baptized without their consent.

Administrators at Northwood Temple Academy(NTA) in Fayetteville, NC said students spontaneously volunteered to be baptized after attending the school's Spiritual Emphasis event, but they were not expecting the controversy that followed

"We certainly weren't expecting the firestorm to come from this," Renee McLamb, Northwood Head of School told CBN News. "Honestly, the whole faculty and staff of middle school and high school were overwhelmed.  We've had great outpouring of the Lord on our students before but never where it seemed like the line would never stop. They just kept coming to the stage."

Only two middle school students and one high school student were scheduled to take part in a baptism on September 1, but at the end of the chapel service, many others joined.

"I feel it in my bones, You're about to move," they said quoting "Spirit Move", a song by Bethel Music and Kalley Heiligenthal. "Today we had over 100 middle and high school students spontaneously declare their faith and get baptized today."

But a small group of parents hit back at the school saying administrators were out of line for allowing kids to get baptized without them being present.

"My daughter calls me from the school and says, 'Mama, can you bring me some dry clothes? I got baptized today,'" one parent told The Fayetteville Observer. "I said, 'What?'"

Another parent complained to the outlet that they missed not being allowed to witness their child's baptism, while another parent said the school's baptism felt like it "undid the baptism that had already taken place at their church."

"I would be happy for my child if she chose to be baptized. HOWEVER...I would want to be present for this event in my child's life. ALSO, I would've wanted to make sure that they are understanding exactly what baptism is, why people do it, that is not a requirement, and that is THEIR CHOICE to do so, and that they're not just following friends or feeling pressured to do something [they're] not ready to do," said Amber Rose Barnhill on Facebook.

McLamb sent a letter to families explaining what happened, The Fayetteville Observer reports.

"The Spirit of the Lord moved and the invitation to accept the Lord and be baptized was given and the students just began to respond to the presence of the Lord," she wrote.

"I do understand that parents would desire to be a part of something so wonderful happening in the lives of their children, and so I apologize that we did not take that into consideration in that moment," McLamb said. "I pray that at the end of the day we will all rejoice because God truly did a work in the lives of our students."

The letter adds that the school typically notifies parents and invites them to baptism and "it was not the intention of any faculty member to do anything behind a parent's back or in any kind of secret way."

McLamb told CBN News the parents were not upset about their children giving their life to Christ, but rather that they missed the opportunity to be a part of it.

"They wanted to be a part of it. And as a school that believes that parents have a God-ordained authority for the spiritual development of their children, we do believe that we partner with them," she said.

She did add that in hindsight she would have given students a chance to contact their parents beforehand.

"We've had many baptisms here, but with never this much attention, but we always ask for permission and we have a little baptism class, and students are able to choose who they want to baptize them, but this time we just didn't get the full parental permission and there were a handful that were upset."

"Ultimately at the end of the day, I love what one of the parents said who was upset... 'We know your heart and we want to extend grace in this circumstance'. That's what the body of Christ does. We extend grace," she said.

McLamb explained that last week's baptism concluded a three-day school event, Spiritual Emphasis. She said it usually kicks off in the spring, but the school's chaplain suggested starting the school year with it.

She added that Thursday's message focused on the students choosing to give their lives to Jesus and that the theme for the school year is "the good life" based on 1 Timothy 6:19.

McLamb explained the school's chaplain told the students "you have to make the choice" and the response was overwhelming.

"I think it is extremely significant, not so much in light of the pressures of culture right now, but all the statistics that are coming out right now from mental health institutions that because of the pandemic self-harm is on the rise, suicide rate among teens is at an all time high," she shared. "So here we are having a time at school where...there can still be joy in the midst...because Jesus is our peace."

McLamb relayed that a substitute teacher watched as one 11th-grader grappled with making that decision.

"I knew that God was dealing with him," the sub wrote to McLamb. "I knew that, thinking back, had he had to go get permission he might have missed that moment."

"She ended her email that it was a 'perfect day'," McLamb expressed.