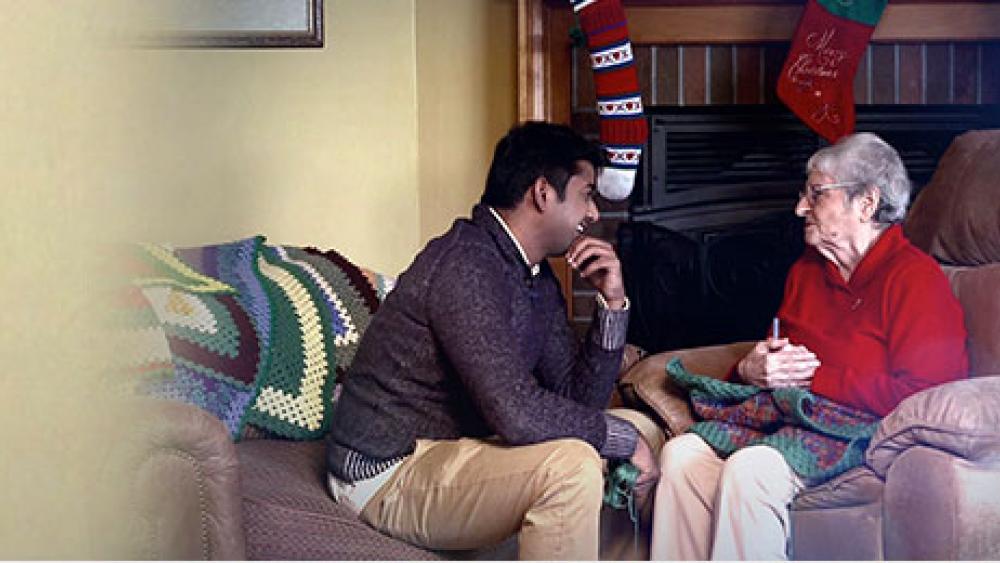 VIRGINIA BEACH, Va. -- In a remote orphanage in India, a group of boys play soccer. They don't know it yet but they're getting something special for Christmas this year - coming from someone they've never met, half a world away, in Virginia.

Ninety-five-year old Connie Vitolo has spent the past year crocheting blankets for the children, one stitch at a time.

Before she starts each blanket, she prays.

"I pray to Jesus, and I thank Him every day," she explained. "When I finish one I say, 'Thank you Jesus, don't let me die before I finish my blanket.'"

I Prayed to Die

Not long ago, Mrs. Vitolo didn't care whether she lived or died. After a bad fall, she had to leave her New Jersey home and move in with her daughter in Virginia.

Before long, depression set in.

Mrs. Vitolo's daughter, Anne Farrell, was worried for her mother. So she prayed a simple prayer for purpose.

"I'm putting it all in Your hands and I'm trusting You that you're gonna make a way for her, to have, you know, to find her purpose here," she recalled praying.

Purpose on a Bulletin Board

And He did. Anne saw an ad on a bulletin board that volunteers were needed to make items for orphans in India.

Mrs. Vitolo found her purpose: She has made 12 blankets so far, and counting.

"She really has a lot of joy just doing this. She can do it all day long, and she just doesn't get tired," Anne said.

"What that lady is doing, it's amazing because something that is giving her life, is also breathing in life and nurture to a child in another country," he said.

Ranjit knows what it's like to be without a purpose. He grew up in the shadow of his father, a well-known pastor in India, who founded 17 orphanages.

"I never wanted to be a part of this," he said. "I don't know how it is in this country, but in my country when you become a pastor, you come to the bottom of the food chain."

Ranjit was pursuing a graduate degree at Regent University when an unlikely partnership emerged, with another student, Aisha Bascom.

"Out of all my classmates there's one in particular that I don't necessarily get along with," Aisha explained. "Being an African American woman from New York City, having a very strong personality, and he being an Indian male from a very"

As she searched for the word, Ranjit interjected, "chauvinistic."

Aisha agreed, laughing, "chauvinistic country. So we didn't get along. But God had a bigger plan."

Ranjit and Aisha are now best friends, part of a movement called "glocalization" - encouraging people to serve at a local level, for global impact.

After finishing graduate school, Ranjit returned to India. He and Aisha have formed an organization, ServeGlocal.com, which works across the globe to provide his father's orphanages with more than basic needs - like playrooms for children who never had toys -- or homemade blankets to cover them warmth and love.

They see Mrs. Vitolo as a perfect example of a "glocal servant."

Aisha said she's excited "to have a little Italian grandmother in the middle of America to say, 'I'll take my frail hands, and I will create something for you that's a practical need.'"

"Verses like, 'Man looks at the outward appearance but God looks at your heart' - what does that mean to us? But when you see what Mrs. Vitolo is doing, it makes complete sense, you know?" Ranjit added.

In anticipation of their first visit Mrs. Vitolo nervously awaited Ranjit's arrival while peeking out the window.

"There he is!" she said as he approached her driveway. Outside, Ranjit approached the front door and rang the bell.

Once a year, Ranjit returns to the United States. This time, he made a new friend.

When Mrs. Vitolo opened the door, Ranjit enveloped her in a big hug. While the two exchanged greetings, her spicy Italian wit got the best of her.

"You are good looking, you know that?" she asked.

Immediately after, they made their way to the living room like old friends.

They Don't Have Anyone

The blankets she made were arranged on a chair for Ranjit to see - a rainbow of colors. After they sat, he pulled out his phone to show her pictures of some of the orphans.

"That's what I want -- people that don't have anybody. And if just one of these can cover them when they're cold, I'll be happy," she said. "I wish I had one here, I would hug them, kiss them."

Mrs. Vitolo marveled at what happened.

"Jesus has a purpose for us all. But I never thought He had a purpose like this for me," she said. "And I'm very happy, and honored, and humble. Jesus, I love You, I thank You, and I praise You all my days. Until the day I come home to You."