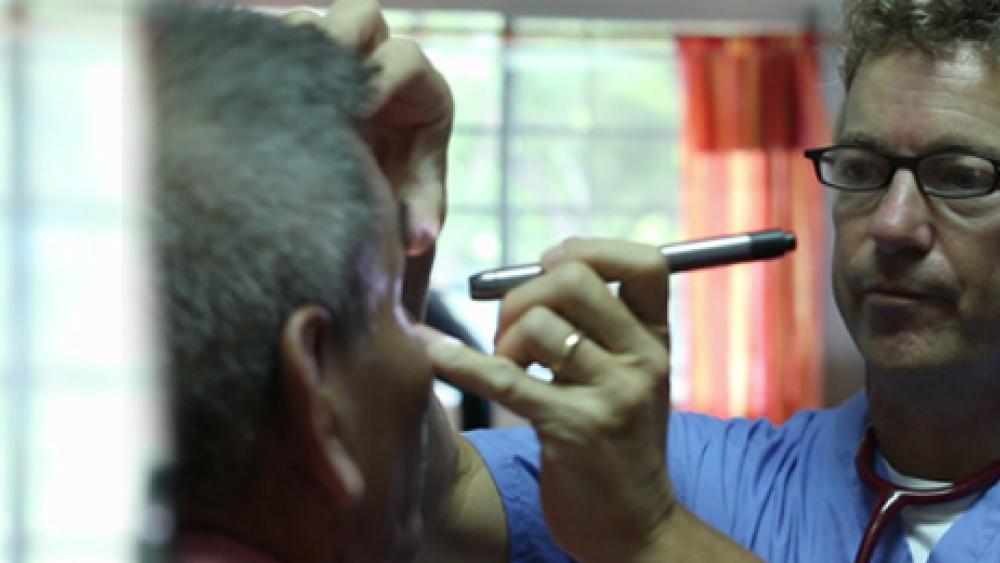 SALAMÁ, Guatemala -- Most know Rand Paul as the Republican senator from Kentucky who appears to be following in his father's footsteps and gunning for the White House. However, there's another side of him.
The licensed ophthalmologist still performs cataract surgeries when he's not serving in Washington. In fact, after practicing medicine for nearly 30 years, Washington forced him to give up a huge part of his life.

"I thought when I was elected that I would actually get to practice medicine and get to do surgery. Then I was told I wasn't allowed, other than I can do it for charity. So I do some in Kentucky four or five times a year," he said.

And now he performs some in Latin America. He was there recently working with a team of doctors from the Moran Eye Center at the University of Utah to perform surgeries in Salamá, a town right in the middle of Guatemala.

"I love doing surgery and I first got interested in ophthalmology because my grandmother had a lot of problems," he told CBN News.

Why Guatemala? Some say its Paul paving his vision for the future.

There's some truth to that, but his Latin connection goes back nearly 20 years when the Hernandez brothers traveled from Guatemala to Bowling Green so Paul could operate on their eyes.

He checked their progress and examined them again in Guatemala.

Here in Salamá there are two ophthalmologists serving nearly a million people. In contrast, in the U.S. there's one for every 20,000.

More than half of all Guatemalans live below the poverty line so even with access most can't afford eye care. When given the opportunity to see a doctor for free, people lined up early and waited patiently.

"I feel blessed, blessed by them helping people who have lost their eyesight, and they'll be able to gain it back God willing," one woman said.

Another man who farms said, "My problem is I can't see anymore. I have cataracts. I've had eyesight problems since I was a baby."

More Than an Inconvenience

Michael Yei works with the Moran Eye Center and travels on many of their mission trips. He says blindness is an economic problem most families in developing countries can't afford.

Thirty-nine million people in the world are blind, 90 percent of them live in poverty, and most of them could be cured if they had proper access to eye care.

Young children in developing countries who go blind only live another year or two. That's one reason why the doctors in Guatemala put up with the cameras and chaos following Paul, hoping it will shine a light on the burden of global blindness.

"It's just great to have another doctor you know, someone who's willing to come here and work in challenging conditions," Yei said.

Paul wanted to focus attention on his surgical skills, but when he invited the cameras, some suspect it was to cast himself in a new light for some conservatives who see him as weak on foreign policy. It's something Paul calls a dirty rumor.

"Some of the narrative is driven by people who are competitors, who would like to be the one leading the party or leading what our party stands for. But the bottom line is I'm a big follower of Ronald Reagan and I believe in peace through strength and I believe the number one priority of the government is to defend us against foreign attack," Paul said.

Solutions to Ease the Pressure

This year, authorities have apprehended more than 60,000 unaccompanied children and another 60,000 adults with children illegally crossing the U.S. border, many of them from Guatemala.

Paul talked with Guatemalan President Otto Pérez Molina about a solution he thinks could ease the pressure.

When it comes to the immigration stalemate in Washington, Paul's sticking to his demand to secure the border before anything else.

"The problem is we've been doing the reverse. We've been promising people things without securing the border, so really the first thing you have to do is secure the border. But it's interesting, securing the border isn't always sort of fence or barbed wire, things like that," Paul said.

"It's also having an adequate work program because we actually want people to come to our country to work. Four-hundred thousand people come to pick crops every year in America, so it's a matter of trying to figure out how to do it in an orderly fashion," he added.

The junior senator is sending all the signals that he's running for president. CBN News asked him what he's considering as he makes that decision.

"I think all of us want to do what we're most effective at doing and it's whether that will be as a senator from Kentucky or a physician from Kentucky or running for another office. It's whether you can have an impact and effect and do something that would make the country better," he said.

While this trip may have helped gain positive press, for many of these Guatemalans, it was life changing.

One grandmother, her eye still covered following her operation, said, "I thank God for the operation. I feel good. Thanks to God!"