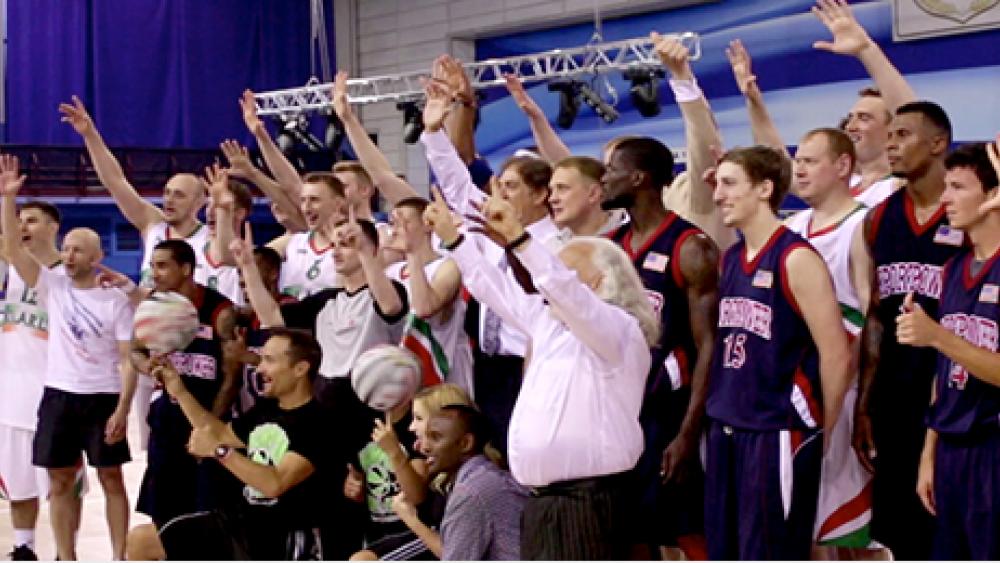 Reaching people with the gospel while improving diplomatic relations between two countries can be tough. But throw in a basketball and many say it's easier than you might think.

Sports and the passion that surrounds it is a universal language. This summer, a widely anticipated basketball game in the capital city of Belarus pitted former NBA players against the national team of Belarus, but behind the picks, assists and dunks was an exercise in evangelism and diplomacy.

"It is really neat that American NBA players came to our Belarusian land," one of the hundreds of Belarusians who showed up to watch said.

Some people in this former Soviet country remain skeptical of Americans, but bring in members of the NBA and even the native fans cheer, "U-S-A, U-S-A."

"It's not better or worse than any other ministry, but it's a unique one that can open up doors that no one else can," Bill Alexson, the founder of Sports Power, said.

It's a ministry he created decades ago that brings together retired NBA and European League Christians who travel the globe playing national teams and sharing the gospel. The remarkable thing isn't the players' moves on the court, it's the nearly unfettered access they enjoy in the countries they visit.

"It's a phenomenal thing and the press goes everywhere we go. You say to the kids 'jump' and they say how high? And we have our lives changed in the process," Alexson said.

Schools swing open their doors, giving players a chance to witness to kids. Even the highest levels of government pay attention, often inviting players to sit in on meetings and interact with the nation's top decision makers.

Jerome "Junkyard Dog" Williams, who played for the New York Knicks, among other teams, is one of Sports Power's stars. His moves are his ministry and he's growing his "dog pound" one famous bark, one picture with fans and one international venue at a time.

"Yeah, the dog pound, you know, it grows every day, but it's the Lord's dog pound. It's His," Williams said with a chuckle exposing his contagious smile. "It's an honor to play for not only our country but for our Lord and Savior Jesus Christ."

"I understand that my platform that the Lord gave me with the NBA puts me on a pedestal in any part of the world," he added.

Retired NBA pro Paul Grant gets it, too.

"You can't have expectations because magical things happen that we can't even imagine on any of these trips," Grant said.

Belarus isn't a place where Americans always feel welcome. CBN's presence in the country even made national news. Seven years ago Belarusian president Alexander Lukashenko, known as the last dictator of Europe, kicked out the U.S. ambassador and 30 American diplomats. Since then the U.S. has been working to improve relations one play at a time.

"The idea is to use sports as diplomacy to help use this universal language of athletic competition to help people understand each other better and ultimately to lead to better relations in general," says Scott Rauland, the top American diplomat in Belarus.

This summer the U.S. is funding a new three-on-three basketball court in Minsk.

"Everybody in Belarus knows basketball because everybody watches NBA, it's on national television so such events and being able to have this three-on-three program together with the embassy of the United States, absolutely it will bring the countries closer," Igor Seliun said. Seliun is coordinating the new three-on-three basketball program in Minsk.

If the U.S. wants to reach Belarusians, sports may be one of the best ways.

Belarus President Alexander Lukashenko is an athlete and avid sports fan. He even has a vice president of sports, Maksim Ryzhenkov, who just happens to be his closest advisor.

"Many problems are actually arising because of the lack of mutual understandingand sport itself does not bring any political colors, it does not make people turn their backs to it," Ryzhenkov said during a recent news conference in Minsk.

"And the barking of the dogs shown by Jerome (Williams) woof, woof is much more worth it," he continued, smiling at Williams.

Egor Mescheriakov is a product of sports diplomacy. A State Department program called Sports United helped him sharpen his basketball skills in the U.S. and play for The George Washington University shortly after the fall of the Soviet Union.

"It's been a dream come true really because growing up in the Soviet Union you don't really think about going to the U.S., (or) even getting some Visas. It was a problem. So suddenly in a few years everything changed and we were very thankful for the opportunity," Mescheriakov reminisced.

Now he leads the Belarusian Basketball Federation, sending young boys and girls to America to learn about the culture and gain some new moves on the court.

"I was asking them what's the biggest difference when you went to the U.S. and how the basketball approach over there compared to Belarusian one and they said the coaches are very inspirational there. They were very inspired by the idea of women's sports and women's power that actually such a place exists as a woman's NCAA Hall of Fame," he said.

Belarus holds a strategic position between Europe and Russia, but before relations with the U.S. can improve, American officials say Belarus must address some major concerns, including restrictions on religious freedom.

Meanwhile, Christians and diplomats will keep working to change hearts and minds one game at a time.