How a Hellish Tyrant's Abuse Birthed a Free World 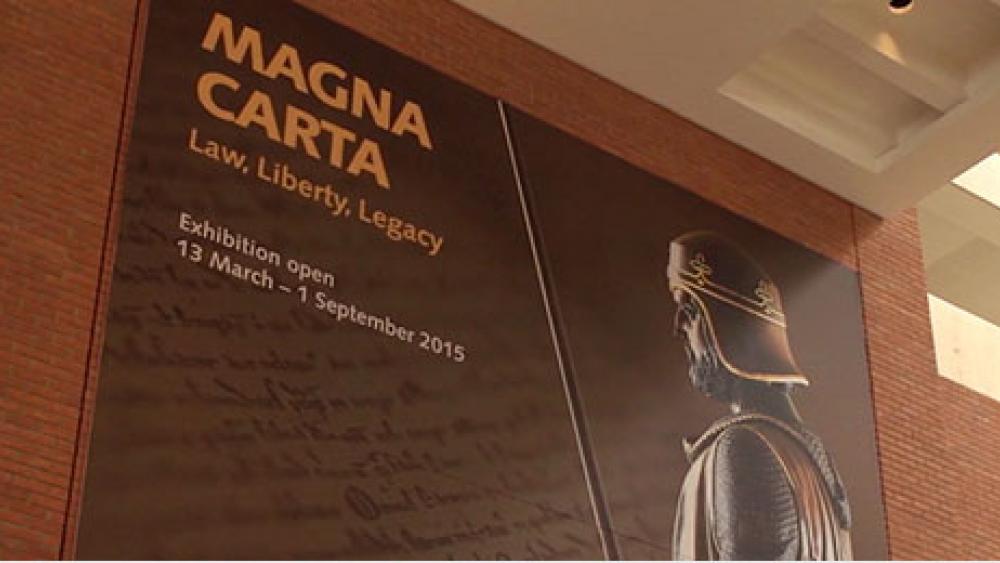 LONDON -- At the core of America's judicial system is the notion that no ruler, government official, or elected leader is above the law. It's a tenet recorded in every one of our founding documents.

But that revolutionary idea didn't originate in the United States. It came from a 13th century peace treaty that has shaped the free world for 800 years.

"The Magna Carta today, the principles contained therein, affects the lives of nearly 2 billion people in over 100 countries around the world," Sir Robert Worcester, chairman of the Magna Carta Committee, said.

There are only four surviving original copies of the 1215 Magna Carta. One of them is currently on display at The British Library in London along with two of its much younger, but more famous, 18th century cousins: the Declaration of Independence and the U.S. Bill of Rights.

"In the Declaration of Independence, you have America standing up to a tyrannical king," Dr. Claire Breay, of The British Library, said. "But people are ironically looking back to Magna Carta, which is of course a document granted originally by an English king."

Worcester describes the document as Britain's greatest and most important export.

"Eight of the ten in the Bill of Rights, the first ten amendments to the Constitution of the United States, are straight from Magna Carta," he said.

The Magna Carta, Latin for "great charter," was drawn up at a time when the "divine right of kings" and the feudal system was the law of the land, whereby a monarch's right to rule was not bound by any earthly authority, but came directly from almighty God.

"There was only one lawmaker -- the king -- and that meant life or death; it meant imprisonment," Worcester explained.

"It meant all sorts of penalties that were -- could be whimsical," he said. "And in King John's case, it was whimsical."

King John abused his power to such a degree that he became one of the most loathed and reviled rulers in English history.

Crowned at Westminster Abbey in 1199, he inherited the throne from his brother, Richard the Lionhearted. Unlike his brother and father, Henry II, John was inept, greedy, corrupt, and showed mercy to no one.

In the first five years of his reign he lost most of his inherited lands in France through military and foreign policy blunders. The chronicler Gervase of Canterbury called him "John Softsword."

His wars were unpopular and costly so he placed heavy tax burdens on his subjects to finance them.

"He was very good at fundraising," recalled Worcester. "He was selling off widows to widowers and instructing them that they had to marry this woman and if they didn't want to, then he'd fine them."

"If he did want to, he'd take money for it," he continued. "And in the meantime, she might try to bribe him to stay single because she couldn't stand the sight of the particular chap he was offering. And so he was collecting money from all three."

If the barons owed him money, King John took their children as hostages until full payment was made. He would also degrade the wives of his noblemen with lewd and lustful behavior and added insult to injury with more taxes -- just because he wanted to.

"And that was the thing that really led to the theme of no taxation without representation," Sir Robert added. "He tripled their taxes."

Perhaps his most insidious offense was his abuse of individual rights. He meted out judgment and punishment without due process. When his Welsh barons threatened rebellion in 1212, he had 28 of their sons hanged.

Mathew Paris, a 13th century historian, famously wrote: "Foul as it is, Hell itself is made fouler by the presence of King John."

The political climate in January of 1215 boiled over with revolt among his beleaguered, yet well-armed barons.

They confronted the heavily guarded John at London's Temple Church and demanded that he fulfill his sworn oath and restore the ancient liberties granted to them a century earlier by King Henry I.

According to one historian of the time, John scoffed and vowed he'd "never grant them liberties that would render him their slave."

By spring of that year, the barons renounced their allegiance to the crown and their forces took England's capital, London. With John "the Softsword" cornered and forced into negotiations, he chose a serene meadow called Runnymede.

King John met with the barons in a field along the banks of the Thames, two miles south of Windsor castle, to make the peace treaty. It was June 15, 1215, that he affixed his seal to the great charter.

The peace treaty, originally called the Articles of the Barons, contained 63 clauses that limited the king's powers in matters of the church, courts, trade, taxes, and individual rights.

"So it's a potpourri of all sorts of things that are terribly important," Worcester explained. "But the absolute principle thing is for the first time a peaceful elimination of the divine rule of a king."

The following year, King John died of dysentery and was replaced by his heir, the boy King Henry III. Under wise counsel, King Henry amended the articles three times.

"I think the most important thing about Magna Carta sort of holistically is that it established the importance of the principle of the rule of law," Breay said.

The Magna Carta influenced centuries of English law and laid the groundwork for establishing individual rights.

"There's women's rights, actually, in the Magna Carta," Worcester said. "The privilege of a widow not to be forced to marry without her consent: women's rights. Same thing with children; there were children's rights."

In time, many of the articles lost their relevance, but there's one today that remains the bedrock of America's judicial system.

"The key clause, which is buried in the middle of Magna Carta -- it's not given any particular prominence in the document itself but guaranteeing access to justice and the right to a fair trial," Breay noted.

It's the one cause, she said, that has "really stood the test of time and that people have looked back to over the centuries ever since. That's the one that's really at the heart of Magna Carta's fame today."

Through the writings of Sir Edward Coke and others, the Magna Carta and its ideas made their way to the shores of the new world, where again, the king's subjects were on the verge of revolution.

Battle Cry of a Revolution

"No taxation without representation -- that's very important," Worcester noted. "It was, of course, the battle cry of the American revolution."

A medieval historian said of King John, "He feared not God, nor respected men." It was, however, out of his abuses that Magna Carta emerged and over time became the cornerstone of liberty, law and democracy.

"I think it's amazing in this 800th anniversary year just how much national and international interest and excitement has been generated around the Magna Carta," Breay said. "And how it's moved from being a medieval peace treaty into one of the most famous and iconic documents in the world."