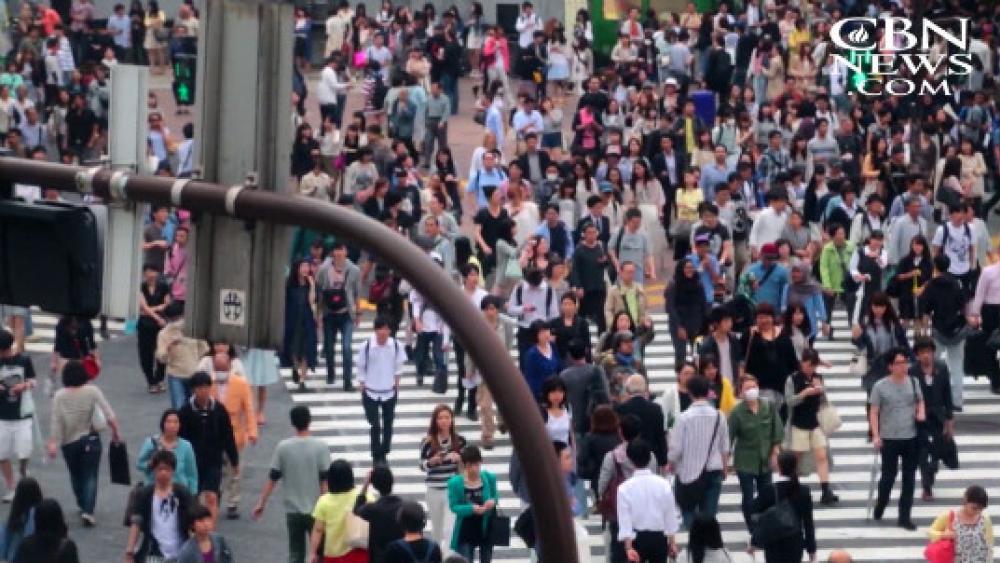 TOKYO -- Japan's latest census confirmed the hard reality long ago signaled by shuttered shops and abandoned villages across the country: the population is shrinking, literally.

Inside the Pacific island nation, more people are dying than being born.

The 947,000 decline in the population in the last five years was the first since the once-every-five-years count started in 1920.

"I am scared for the future of my children and my country," one Japanese father told CBN News.

"The problem is that young women are not having enough children to keep our country going," said one young lady on the streets of Tokyo.

Japan's population has shrunk by a record 1 million since 2008. At the same time, the Japanese are living longer.

Japan is home to the fastest aging society in the entire world. There are approximately 33 million people over the age of 65 -- that's roughly 25 percent of the country.

Experts warn that number could reach as high as 40 percent in the next few years.

"We are dealing with an unprecedented situation," warned Ryuichi Kaneko, head statistician at Japan's National Institute of Population. "No other country in the world is facing such a crisis."

"And the rate of aging in Japan will only climb. We are projecting that by 2060, 40 percent of the population will be 65 years or older!" Kaneko said.

The government is in a panic. Ten years ago it created an agency to encourage couples to have more children.

"Having a family is a beautiful thing," one Japanese mother said. "I'm trying to encourage others to see it as a blessing and not a curse."

But a study this year shows the Japanese just aren't interested in sex or marriage.

A record 50 percent of married couples said they've stopped having sex. Among the main reasons:

"This is why Japan is known in the world as the country with very few children," Kaneko explained.

He also discovered that millions of Japanese aren't even dating. A survey he did in 2011 found 61 percent of unmarried men and 49 percent of women in their 20s and 30s were not in any kind of romantic relationship.

"And if they are in a relationship, they are postponing marriage till much later in life or simply choosing to remain unmarried," Kaneko said.

It was a sentiment shared with CBN News by several young people on the streets of Tokyo.

"There are more women working today than ever before and that's a good since it will help with Japan's shrinking labor force," one young lady told CBN News. "But this also means that women are delaying or choosing not to get married."

"Life in the city is very expensive," said one 26-year-old man. "Trying to start a family or having children will make it even more challenging."

Elderly Caring for the Elderly

The strain of falling birth rates, a shrinking labor force, and longer lifespans is evident at one Christian nursing home west of Tokyo. Director Satora Gasha doesn't have the staff to care for the elderly. He must rely on church volunteers -- many of whom are over 65 themselves.

"A shrinking workforce means we have older people looking after the very old," Gasha said. "This crisis is putting a lot of pressure on the government and society to care for the aging."

In the next 25 years, experts say half of Japan's towns and small cities could lose many of their young people, especially women in the 20s and 30s as they flee to big cities leaving retirees behind.

"There aren't many children coming to church anymore, only seniors," Morimoto told CBN News. "And this means the church will have to close someday because there won't be enough people to support the church."

Morimoto pastors a small church on the outskirts of Tokyo. The majority of those who attend are over 70 years old, like the Takeda's who've been married for 52 years.

"Young people work so hard they don't have time to socialize or start a family," Eiko Takeda explained. "We are praying that this changes."

Morimoto and other area pastors encourage young people to move to town.

"Pastors here have a vision to create more Christian homes in this community so they are providing a match-making service between churches to encourage young people to get married and have a Christian home," he said.

Sugamo, a community just north of Tokyo, is indicative of many communities all across Japan where the majority of the folks are over the age of 65.

Some experts say the solution to Japan's graying problem is robots and foreign immigration.

Leading the charge is 68-year-old Atsuto Sawakami, who runs a popular mutual fund in Tokyo. He's investing millions of dollars in companies developing robots to assist the elderly.

"I'm interested in robotic suit technology that the elderly can wear to help them move around, plus other innovations that will help offset our shrinking labor force," said Sawakami, who owns Sawakami Asset Management.

Sawakami is also calling for large-scale foreign immigration or else he says Japan will face an economic collapse.

"We especially need foreign workers on the manufacturing lines," he said.

But the idea of opening the country up to foreigners is not a popular one.

"I'm not against foreigners, but this is a Japanese problem and we need to solve it," one lady told CBN News.

It's Not Just Japan

Japan isn't the only society getting old fast.

Moody's Investor Service says in the next five years, 13 countries, including France and Sweden, will be "super-aged," with 20 percent of the population over 65.

The United States will reach that milestone by 2030, along with 34 other countries.

"Ageing is a problem that's happening in all advanced countries, and they need new solutions on how to help older people," Sawakami said.

"The impact of our rapidly ageing society will affect every area of our country," he warned.