Divine Destiny: Churchill's Faith and the Defeat of Evil

VIRGINIA BEACH, Va. -- During WWII, Prime Minister Winston Churchill urged the free world to rise up and defeat Adolph Hitler's Nazi regime. Churchill provided inspiration and resolve in the face of despair, but did he believe in God?

The new book God and Churchill, co-authored by Churchill's great grandson Jonathan Sandys and journalist Wallace Henley, says that despite his early years as an agnostic, Churchill came to believe personally in God.

"I definitely conclude that my great grandfather had a strong faith," Sandys told CBN News. "In those days you didn't talk about your faith. Churchill wasn't a religious figure. He was a prime minister."

In God and Churchill the authors cite a conversation between the prime minister and his body guard Walter Thompson. While on a walk in St. James Park in London during the 1940 blitz, they narrowly escaped a bomb. Churchill then told Thompson not to worry, that there was someone else who was looking after him.

"Thompson misunderstood and said, 'Do you mean Sgt. Davis?'" Sandys explained. "And great grandpapa gave a small smile and he shook his head and said 'no' and pointed to the sky. He said, 'There's someone up there who has a mission for me to perform and He intends to see that that mission is performed.'"

Sandys decided to write the book after speaking with Churchill's official biographer, Sir Martin Gilbert. Gilbert encouraged him to pursue material on Churchill's faith, saying "go out and get the research -- there's a lot of it."

That led to a collaboration with journalist Wallace Henley and the discovery of multiple private references to God and Churchill's personal belief.

Henley tells the story of Churchill discussing world leaders through the ages with Field Marshal Bernard Montgomery, a senior officer in the British army.

"'What do you think about Jesus Christ?' Montgomery asks Churchill. And Churchill said, 'Jesus Christ was unsurpassed in his capacity to save sinners.' Those were his words. We quote them in the book," Henley said.

Henley and Sandys credit Churchill's nanny with teaching him the Gospel.

"This nanny, Elizabeth Everest, pumped the word of God into him and he analyzed things from that perspective," Henley said.

Churchill's Christian worldview allowed him to recognize clearly Nazism as the pit of evil even when others did not.

He openly acknowledged that only God could see Britain through the war and encouraged the British to put their hope in Him.

"Unlike Adolph Hitler, great grandpapa directed the hope of the people toward God," Sandys said. "Whenever he used God or used a Bible quote within a speech, it was always to push people's hopes toward God."

"Whenever you look at his speeches he separates the Nazis from the German people," Sandys said. "He wanted freedom for the German people and it was vital that we didn't repeat what happened at the end of the first World War where Germany was just pushed aside."

Sandys and Henley point out that Churchill led from a core belief in divine destiny. As a 16-year-old school boy he prophesied to a friend that London would one day be attacked and that he would lead England to victory.

"To then state clearly and with confidence that not only are you going to be the leader in a time of war, but you're going to lead your country to victory -- that becomes absolutely impossible," Sandys said. "But in the light of history in 1945, you see that's actually the case."

Sandys and Henley say it's almost unbelievable how many times Churchill escaped death during his time in the Boer War and later in WWI.

As a member of parliament in the 1930s, his public reputation sank as he warned of Hitler and the Nazis and spoke out against appeasement policies.

In the end, Hitler's advance through Europe vindicated Churchill and silenced his critics, preparing him to become prime minister in 1940.

"God was intervening through this man in that period of history," Henley said. "So God will intervene in our history. He will raise up people like that."

Sandys and Henley say such a belief can provide hope for today when once again, the world is in need of a strong leader to stand up against the forces of darkness. 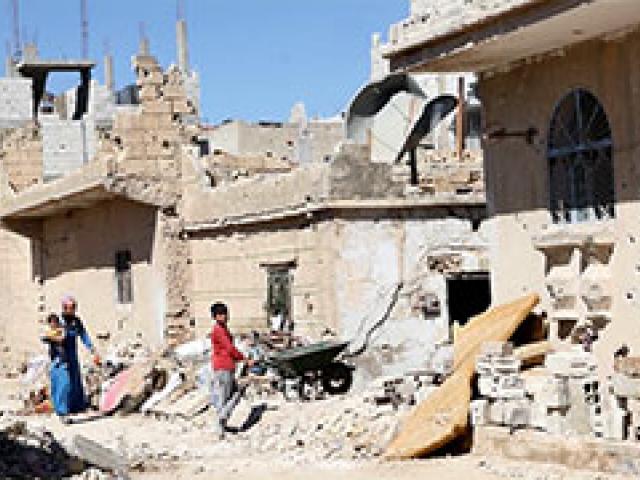 ISIS's Evil Crushed This City, but Not Its People
CBN News Email Updates