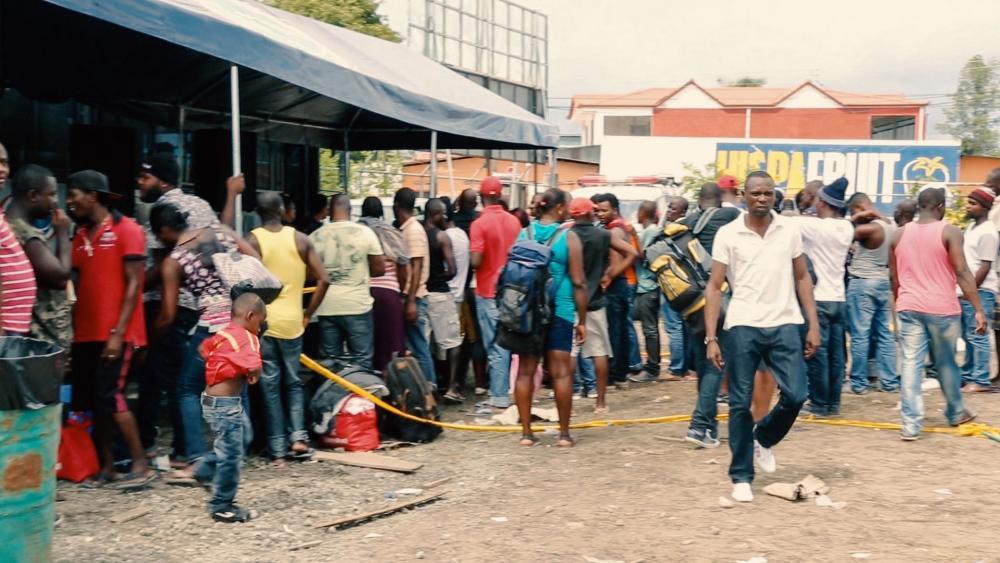 METETI, Panama -- More than a million refugees from Africa and the Middle East have made their way into Europe over the last year and a half, garnering massive media coverage worldwide.  That same reporting may have served to ignite the idea of immigration in the minds of the masses worldwide.

In Panama, immigrants from over 20 countries are trekking through the vast and dangerous Darien jungle with little more than the clothes on their backs, all with one single-minded purpose: to make it to the United States, even if they have to walk.

The tiny village of Meteti is one of the first places these refugees are processed by Panamanian immigration authorities once they emerge from the jungle.  The worst of their ordeal may be over, but they still have a long way to go.

Samuel Adeniyi is from Nigeria where he was attending church one Sunday when the Islamic group Boko Haram attacked.

"They threw something into the church and some people ran away while some got burnt. As I was running away I got burnt through all my body. I was like a roasted chicken," Adeniyi said.

Some friends found him and took him to the coast where they put him aboard a cargo ship.

In Colombia, he found a large group of Africans planning to go to the U.S. Unable to speak Spanish, Adeniyi simply followed the crowd -- straight into the forbidding Darien Gap between Colombia and Panama.  He had no idea what he was in for.

"It was very, very tough. It was like a hell in the jungle. I had never had such an experience," he said.

On May 9, Panama's President officially closed its border with Costa Rica, but, in reality that's easier said than done.

Commissioner Oriel Ortega has been given the monumental task of stopping the flood of migrants walking into Panama from Colombia.

"Over the last five years we've had a massive exodus of migrants crossing our border with the intention of going to North America. The jungle is very dangerous," he added. "There are lots of difficult situations like sicknesses, wild animals, even criminals."

Hundreds of Migrants a Day

The border police are doing their best to stop the flow of migrants while at the same time caring for those who survive the trek.  But they have a lot of ground to cover. There are approximately 276 kilometers of border between the Pacific Ocean and the Caribbean, and the border police are maintaining constant patrols.

Despite the border being closed, hundreds of migrants continue to come through every day.

Syed Imran Gillani is a Pakistani immigrant who traveled by air from Pakistan to Brazil and later continued north hoping to make it to the United States.  His trip has been equally arduous.

"It's terrible," he told CBN News.  "The journey from Brazil until here, it's terrible. In Colombia, most of people get robbed by the police. They even searched me. The guy even told me to get naked. He took my pants off!  He checked everywhere. You know, a person who can think and hide money -- he knew exactly where to look."

Like many of the migrants, Gillani did not have a passport with him by the time he arrived in Panama. He said he had lost it somewhere on his journey from Pakistan.

Looking for a Better Life in the U.S.

Gillani and his friends' troubles are compounded by the fact that they hail from a Muslim country. But they say the violence is what they are running from.

"We are afraid to live there," he said.  We want a peaceful life.  A better future for our family, for our kids, you know? They think we are terrorists," he added.  "We are not terrorists!"

It's rumored that the U.S. Embassy in Panama is vetting refugees from Muslim countries who end up in Panama, but the embassy refused repeated requests for comment.

Nicaragua and Costa Rica have also closed their borders to immigrants, meaning that Panama must struggle to deal with the continued flow without simply sending them along to the north. So far no solution has been found, and in the meantime, the migrants are hoping things will work out somehow.

I asked Gillani what he hopes to find in the United States.

"A peaceful life.  A better future for my kids and for my family," he said. "Justice. Peace and justice for everybody.  Everybody's equal."