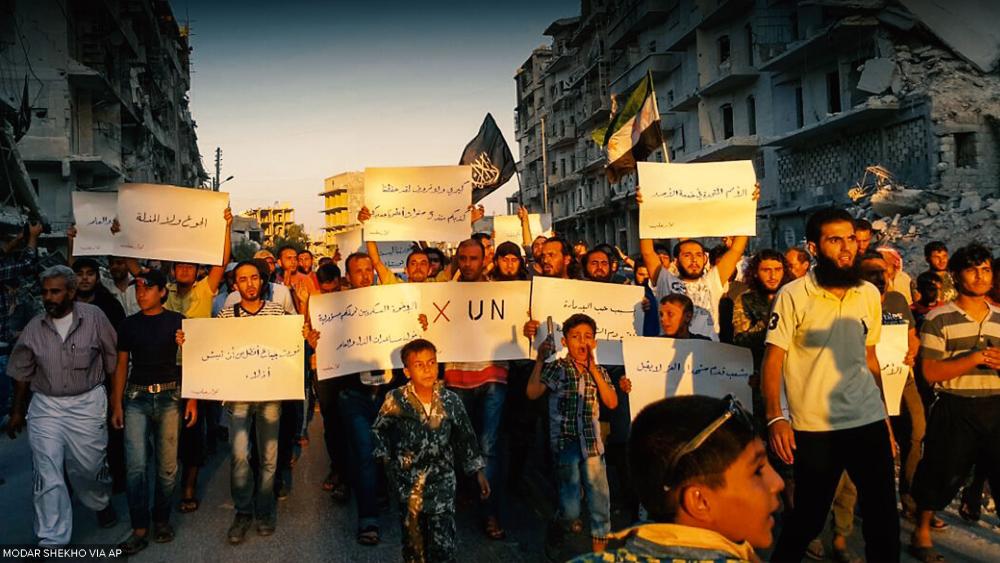 BEIRUT — The U.N. humanitarian aid agency suspended all convoys in Syria on Tuesday following an overnight attack on aid trucks that the International Committee of the Red Cross said killed about 20 civilians, mostly truck drivers and Red Crescent workers.

The attack plunged Syria's U.S.-Russia-brokered cease-fire further into doubt. The Syrian military, just hours earlier, had declared the weeklong truce had failed. The United States said it was prepared to extend the truce deal and Russia — after blaming rebels for the violations — suggested it could still be salvaged.

It was not clear who was behind the attack late on Monday, which sent a red fireball into the sky over a rural area in western Aleppo province. Both Syrian and Russian aircraft operate over the province, while the U.S.-led coalition targets the Islamic State group in other parts of the country.

In Geneva, Jens Laerke, a spokesman for the U.N. Office for the Coordination of Humanitarian Affairs, said Tuesday that all aid deliveries had been halted pending a review of the security situation in Syria in the aftermath of the airstrikes. Laerke called it "a very, very dark day... for humanitarians across the world."

A member of the Syrian Civil Defense — a group of volunteer first responders also known as the White Helmets — criticized the U.N. humanitarian aid agency for suspending the convoys.

Ibrahim Alhaj told The Associated Press that Syrian civilians will pay the price for the decision — and that the U.N. should have condemned the attacks on the convoy rather than suspending aid.

The ICRC and the Syrian Red Crescent issued a statement Tuesday saying 20 civilians had been killed in the convoy attack, many of them struck while offloading aid from the trucks. Much of that aid had been destroyed, they said. ICRC President Peter Maurer said the attack was a "flagrant violation of international humanitarian law" and "totally unacceptable."

Syrian activists and paramedics had said earlier that the airstrikes killed 12 people.

Among the victims was Omar Barakat who headed the Red Crescent in Uram al-Kubra, the town where the attack occurred, the Syrian Observatory for Human Rights, a Britain-based monitoring group, and Aleppo-based activist Bahaa al-Halaby said.

The White Helmets first responder group posted images of a number of vehicles on fire and a video of the attack showed huge balls of fire in a pitch black area, as ambulances arrive on the scene.

The convoy was part of a routine interagency dispatch operated by the Syrian Red Crescent. U.N. officials said it was delivering assistance for 78,000 people in the town of Uram al-Kubra, west of the city of Aleppo. Initial estimates indicate that about 18 of the 31 trucks in the convoy were hit, as well as the Red Crescent warehouse in the area.

"All this was supposed to have been on that convoy, but I do not have a breakdown of what got destroyed and what did not get destroyed," he said.

When asked who was behind the airstrikes, Rami Abdurrahman of the Syrian Observatory for Human Rights, said Syrian President Bashar Assad's "regime does not have the capabilities to carry out such airstrikes within two hours."

He said the airstrikes on Aleppo province, including the ones that hit the convoy, were part of some 40 air raids that lasted about two hours — starting at about 7:30 p.m. Monday — and that "it was mostly Russian warplanes who carried out the air raid."

Al-Halaby said that rebels in Aleppo province also claimed Russian aircraft were behind the attack.

A paramedic, speaking in a video released by Aleppo 24 News, a media collective, blamed Russian and government warplanes as well as Syrian army helicopter gunships that he said dropped barrel bombs.

The Syrian and Russian militaries both denied on Tuesday they were involved in the attack.

U. N. Humanitarian Chief Stephen O'Brien called on "all parties to the conflict, once again, to take all necessary measures to protect humanitarian actors, civilians, and civilian infrastructure as required by international humanitarian law."

Despite the attack, the U.N. appeared to move forward with aid airdrops in Syria.

World Food Programme spokeswoman Bettina Luescher said in a statement that the U.N. food agency had airdropped aid to besieged neighborhoods in the eastern city of Deir el-Zour earlier Tuesday "as part of the planned schedule of deliveries."

Also Tuesday, the Observatory said government forces launched an offensive in the Handarat area, just north of the city of Aleppo, in what appears to be an attempt to tighten the siege on rebel-held parts of Syria's largest city.

Keaten reported from Geneva. Associated Press writer Philip Issa in Beirut and Jim Heintz in Moscow contributed to this report.