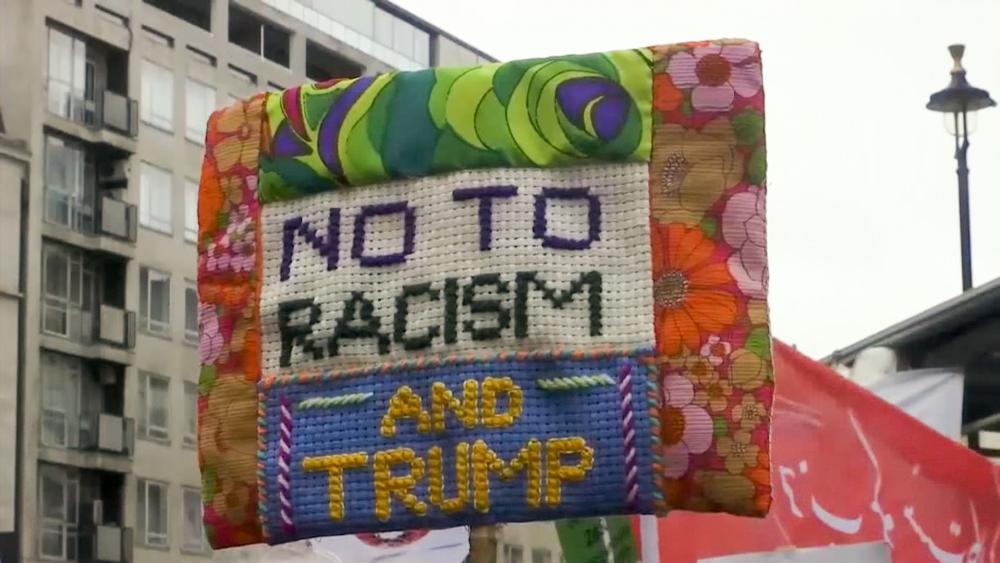 One MP even said if the American president should be arrested if he sets foot on British soil.

What Trump did was re-tweet videos of alleged Muslim violence from a British fringe anti-Islamization group that the British establishment detests.

The British Approach: Attack and Arrest the Critics

While many considered the President's tweets a bad idea, especially since the factualness of one of the videos has been disputed, the whole episode showed again how obsessed the British establishment is with so-called hate speech, even more than the threat of terrorism, according to some.

One response to Muslim radicalism in Britain has been to attack the critics, as if criticism of the problem is as bad or worse than the problem itself.

Almost 3,400 Britons were arrested last year for online hate speech, a term which usually means criticism of Islam – almost 10 times the number arrested for terrorism-related offenses. London police now have more than 900 officers tracking down hate speech on the internet full-time, while British police have had to let suspects of other crimes go because of cutbacks.

'Racism' and 'Hate Speech' Charge Like Being Accused of 'Witchcraft'

At the root of it all, say officials we interviewed, is a belief that criticism of Islam is a terrible thing. It's called 'racism', even though Islam is not a race.

"Racism is kind of 21st century equivalent of being accused of witchcraft in the 17th century," says Gerard Batten, a Member of the European Parliament for UKIP, the UK Independence Party.

"You're guilty until you're proved innocent and the process of proving you innocent could well destroy you anyway," Batten said. "The establishment in my country is absolutely terrified of being called racist or 'Islamophobe' "because once you've been labelled that and it sticks, that's the end of your career; you're not going anywhere."

The same British government that has devoted more money and manpower to stamp out criticism of Islam online dragged its feet when investigating a huge rape gang scandal involving mostly Pakistani heritage men who preyed on as many as one million mostly white English girls.

The same government continues to allow the existence of Sharia courts, and has hosted radical Islamic events on government property.

CBN News filmed this Palestine Conference – which included known anti-Semites and terrorism supporters – at the government owed QE2 Centre, the same venue where a Christian conference on traditional marriage was banned.

The other Trump tweet that miffed British leaders was when he told Prime Minister Theresa May she should care more about the terrorist threat facing her own nation.

This week British police uncovered a plot by Islamic terrorists to blown up 10 Downing Street and kill May.

British police and MI5 are said to monitoring 20,000 potential terrorists. There have been 5 terror attacks in 2017 alone that have killed more than 30 and injured hundreds.

Terrorism As the "New Normal" in Britain

"Every day I fear another terrorist attack," said Raheem Kassam, Breitbart London Editor in Chief and author of No Go Zones: How Sharia Law Is Coming to a Neighborhood Near You.

"This is the new normal for us," Kassam said, "Every day I wake up and check my phone and see where the latest terror attack has been. And yet we're still pulling the pillow over our heads, saying 'la la la, we can't hear you, we can't figure it out, no one knows what's going on.'"

Peter McIlvenna, an aide to Lord Pearson in the House of Lords, called the amount of time the British government spent debating President Trump's tweets "madness," but he told us the establishment can never admit that Islamic culture is a threat to safety and to a free society.

"I thought in Manchester, when you have a bomb with children, that that would really shock people, Mcilvenna said, "and it did shock people, but again there is a fear of what may lie behind it."

So, if it can't stop the message that Islam is a threat, the British government has decided to go after the messengers.

The British government seems almost obsessed with what it calls "social cohesion." Americans might think of it as government enforced 'social harmony' backed up by the police. It's an attempt to keep a lid on boiling social tensions, but the social tensions are still there.

So, when it comes to criticism of Islam or even the superiority of British values, the need for 'social cohesion' means free speech in Britain is gone.

"If anybody was to talk about the superiority of British values over other peoples' values they would probably be arrested on a charge of racism or 'Islamophobia', and I'm not kidding," MEP Batten told us. "You have to be very careful what you're saying in Britain today."

And that is something we were all reminded of when the American President sent those tweets.