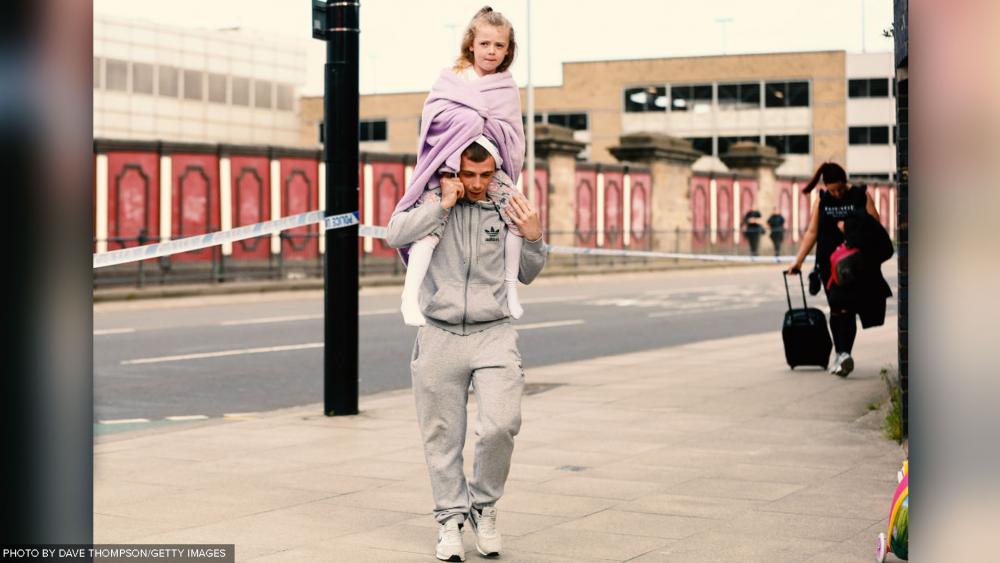 MANCHESTER, ENGLAND - MAY 23: A man carries a young girl on his shoulders on May 23, 2017 in Manchester, England. An explosion occurred at Manchester Arena as concert goers were leaving the venue after Ariana Grande had performed. Greater Manchester Police are treating the explosion as a terrorist attack and have confirmed 22 fatalities and 59 injured. (Photo by Dave Thompson/Getty Images)

Sometimes, we look at our predicaments in life and wonder how in the world God could possibly use us to be a light in the world. Chris Parker is 33 and homeless. By his own account, he begs for money to make it through the day. It seems rather unlikely he would be the source of inspiration for a nation, maybe even the world, but often God uses the most unexpected people to stir our hearts.

Parker was begging for change in the foyer of the arena when the explosion went off, and he described the scene to the Manchester Evening News:

“Everyone was piling out, all happy and everything else. As people were coming out of the glass doors I heard a bang and within a split second I saw a white flash, then smoke and then I heard screaming.

“It knocked me to the floor and then I got up and instead of running away my gut instinct was to run back and try and help. There was people lying on the floor everywhere. I saw a little girl. I wrapped her in one of the merchandise T-shirts and I said ‘where is your mum and daddy?’ She said ‘my dad is at work, my mum is up there’.”

Here is a man most people probably walk by every day without even giving a second glance. Yet, he was a hero in the making. Like the brave firefighters and first responders we see take on fires and danger, he headed directly into the unknown chaos while others ran away. And because of his actions, he was able to provide comfort to a terrified young girl who was alone and likely knew her mother had perished in the attack.

When help came for the little girl, Parker moved on to a woman in her 60s who had some pretty severe injuries. He held her as she breathed her last. The scene has left Parker permanently scarred:

“She passed away in my arms. She was in her 60s and said she had been with her family. I haven’t stopped crying. The most shocking part of it is that it was a kids’ concert. There were nuts and bolts all over the floor. People had holes in their back. It’s the screams I can’t get over and the smell … I don’t like to say it but it smelled like burning flesh. I don’t think anything has sunk in yet. It’s just shock.”

You never know when your time to be the light will arrive. Parker probably didn’t think that in an instant, he would be the only thing standing in the way of someone dying alone and scared, or with someone by their side providing words of comfort as they pass from this life into the next.

God bless this man for his actions. He could’ve run away to safety.

—‘God, Please Save Me’: Woman Credits Faith in God With Saving Her Life After Horrific Accident Tears Her Car in Half

—‘Greater Than Anything, Guaranteed’: Watch Selena Gomez Pour Out Her Heart to God