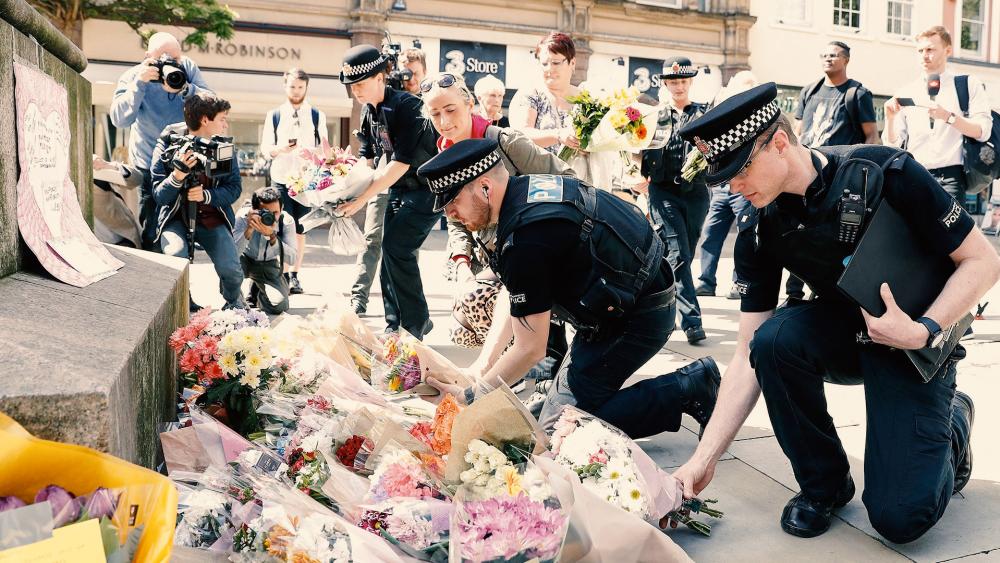 For more, follow Dale on Twitter @DaleHurd and at Facebook.com/DaleHurdNews
The under-appreciated British analyst George Igler once said to me, "This accusation of racism is potentially the most powerful weapon known to man."
Such is the power of the "accusation of racism" that yet another Muslim terrorist attack -- this one using nails and ball bearings on kids as young as 8 -- is not enough to bring British leaders to sufficient moral courage and mental clarity to even utter the word, "Muslim."
British leaders remain more afraid of the "racist" label than of terrorism and carnage.
Predictably, Prime Minister Theresa May's statement on the bombing contained no mention of Islam or the Quran, even though it has been reported that the 23-year-old British-born attacker was heard 'chanting Islamic prayers loudly in the street' outside his home in the days before the attack.
The director of Sharia Watch UK, Anne Marie Waters, tweeted, "Watched the news & wish I hadn't. Its nothing short of surreal. Every single politician on there was pretending, like actors with a script."
Under the spell of political correctness, the only socially acceptable responses to mass murder inspired by Islam's holy book are vague and helpless condolences, warnings against "Islamophobia," candlelight vigils and unity marches with big signs reading "Refugees Welcome!"
Only a "Nazi" would disagree.
Former British politician and journalist Louise Mensch tweeted today, "To all my dear Muslim brothers and sisters in Manchester and across the U.K., we got your back. Neither terrorists nor Nazis will divide us."
On Twitter, "Quen Took," who describes itself as "Femme" and "Queer," genuflected with the tweet, "Don't use #Manchester incident as an excuse for Islamophobia. Stand with our beautiful Muslim siblings & don't scapegoat innocent people. "
Here's a stat for you: a 2016 poll showed that only one third of British Muslims would inform police if a Muslim acquaintance became radicalized.
The UK is now such a cozy place for Muslim radicals that dangerous Salafists from France are emigrating to Birmingham.
Clearly, Britain's Muslim population has a problem that needs to be addressed.
If British leaders had the courage to do so.