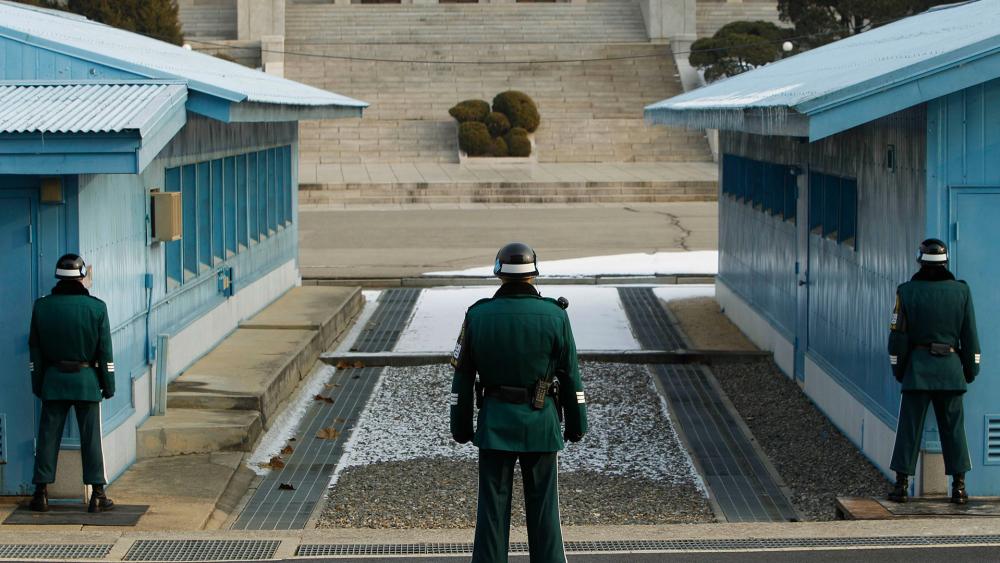 On the cold, gray afternoon of Nov. 13, a lone soldier on the North Korean side of the Demilitarized Zone hops into a jeep and races towards freedom.

He quickly crosses the Bridge of No Return, which was used for prisoner exchanges during the Korean War.

Soldiers of the North watch the jeep and realize one of their comrades is defecting.

In a dramatic video released Wednesday, the soldiers' shock is apparent as they watch the vehicle speed by and they run after him with their weapons in tow.

Near a monument to North Korean leader Kim Il Sung, the jeep slows.  The escaping soldier is close to the border.

Gunfire erupts as the North Korean soldiers fire at the defector at close range using handguns and AK-47 assault rifles.

These are the first shots fired in the border area in almost 30 years. Forty shots are fired at the fleeing soldier, according to South Korean officials.

The defector continues to run and falls in a pile of leaves on the South Korean side of the border.

One of his pursuers dashes across the line before stopping, instantly realizing he's in enemy territory, turns and runs back to the northern side.

Fast forward forty minutes -- two South Korean soldiers crawl up to where the defector is laying behind a short wall.  They grab a hold of him and drag him away.

The North Korean soldiers watch from a distance near the monument.  No more shots are fired.

The defecting soldier's escape, medical care, and recovery have riveted the South's public. His escape is a huge embarrassment for the North, which so far has said nothing about the incident.

The U.N. command says North Korea violated the armistice agreement ending the Korean War because North Korean soldiers fired across and physically crossed the border in pursuit of the soldier.

U.S. Col. Chad Carroll, a spokesman for the U.N. command, told reporters in a live TV briefing Wednesday that North Korea's actions during the defector's escape at the Panmunjom border village violated the armistice agreement ending the Korean War.  North Korean soldiers fired across and physically crossed the border in pursuit of the soldier

A U.N. Command statement said a meeting had been requested with the North's military to discuss the violations.

The soldier underwent two surgeries last week to repair internal injuries.  His doctor said Tuesday the man has regained consciousness and is breathing on his own.

"He said it was so painful when he was shot by bullets but that he doesn't feel pain now," he said.

Doctors plan to keep him in the intensive care unit for at least several more days to guard against possible infection, hospital official Shin Mi-jeong said.

While being treated, surgeons removed dozens of parasites from the soldier's small intestine, including some more than 10 inches long.  This may reflect on the poor nutrition and health of the North Korean military.  Doctors reported the soldier is 5 feet, 7 inches tall and weighs only 132 pounds.

Watch the dramatic video below.