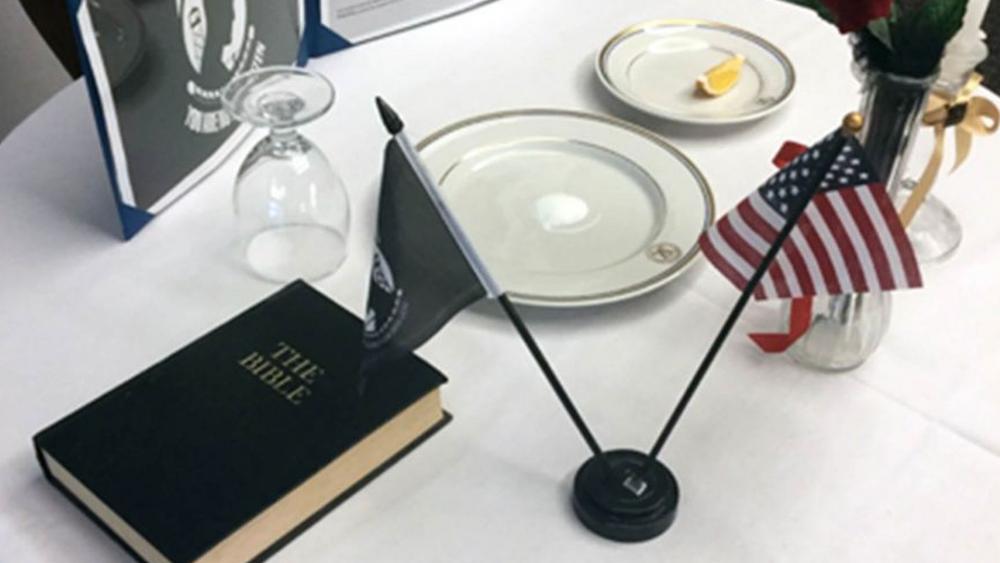 A POW/MIA "Missing Man" table display at the U.S. Naval Hospital in Okinawa, Japan included a Bible prompting the Navy to investigate, according to Stars and Stripes.

The Military Religious Freedom Foundation and 26 families on Okinawa filed a complaint Thursday. They are demanding the Bible be removed right away from the display, along with written materials that explain why the Bible is there, the news outlet reported.

Fox News employee Todd Starnes, host of the radio program Fox News & Commentary, writes that in addition to the Bible, MRFF wants the Navy to remove a placard which reads, "The Bible represents the strength gained through faith to sustain those lost from our country, founded one nation under God."

In the formal complaint, MRFF's attorney Donald Rehkopf Jr. wrote, "The statement on the exhibit's placard is nothing more than an illegal, unconstitutional proselytization from an extremist, fundamentalist Christian sect. It ignores all followers of other religions and totally ignores all those who subscribe to no religion — all in blatant violation of (Department of Defense) and (Department of the Navy) regulations."

Navy Live, The Official Blog of the U.S. Navy, explains the reason for the Bible: "The Bible represents faith in a higher power and the pledge to our country, founded as one nation under God."

"Why is that Bible there?" asked MRFF founder and president Mikey Weinstein, according to Stars and Stripes. "Can you imagine if somebody put a Quran there, or the book of Satan, or the Book of Mormon? It violates the (First Amendment's establishment clause) as well as DoD and Navy regulations."

The complaint also demands an independent investigation into who set up the "Missing Man" table and "appropriate disciplinary measures", Stars and Stripes reported.

If the situation is not resolved to their liking, MRFF lawyers say they will file a third-party inspector general complaint and possibly a federal lawsuit, according to the news outlet.

"Not all POWs are Christian," Weinstein said in the Stars and Stripes report. "This is America. We are a representative, secular democracy… the Constitution is worth standing up for."

According to its website, MRFF "is dedicated to ensuring that all members of the United States Armed Forces fully receive the Constitutional guarantee of religious freedom to which they and all Americans are entitled by virtue of the Establishment Clause of the First Amendment."

However, Starnes disagrees. He calls MRFF "a radical group that has a history of targeting public displays of Christianity."

The general counsel for First Liberty Institute, Hiram Sasser, wants the Navy to not give in to MRFF.

"The Bible is on the table because it is part of the tradition that predates our current demands for political correctness," he told the "Todd Starnes Radio Show." "When we telegraph to our global military competitors that the mere presence of a Bible mentally destroys some of us, we are doomed."

CBN News reached out to the hospital for comment on the investigation and is waiting to hear back.