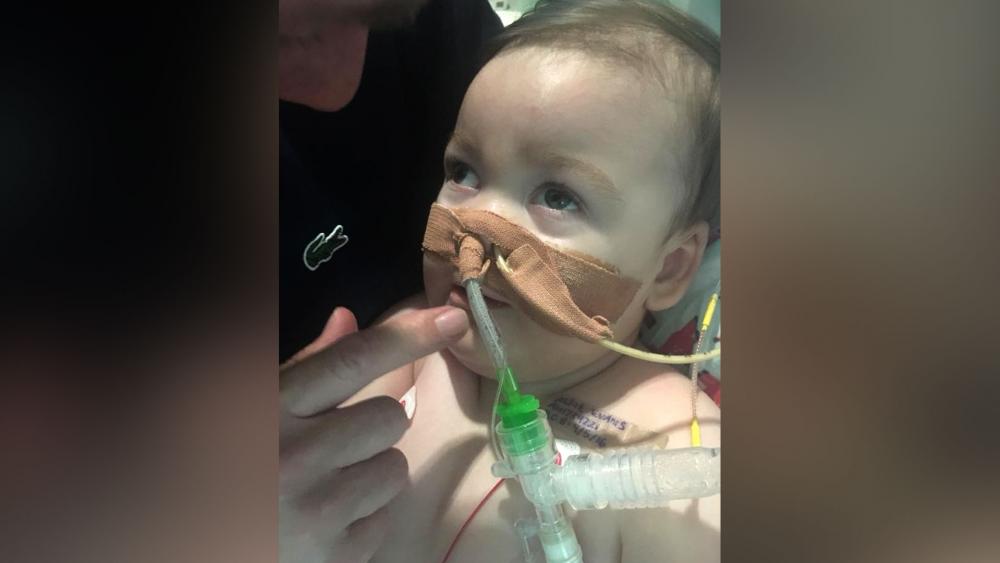 The father of baby Alfie Evans confirmed in a Facebook Live that his son has been removed from life support at a hospital in the United Kingdom.

"Alfie's sustained his life since 17 minutes past 9," Tom Evans said at around 10:39 pm, Liverpool time. "He's needing oxygen, but the hospital won't give him any. Don't know what really to do."

"He's not suffering. That hasn't been started," Evans continued in the Facebook Live. "He's losing his color; I mean his fingers (are) going slowly blue, but he's remaining to sustain his life."

LifeSiteNews reported the hospital removed Alfie from his ventilator sometime after 9:00 pm, Liverpool time, 4:00 pm US Eastern time, citing "sources on the ground."

The 23-month-old boy has been fighting for his life while suffering from an undiagnosed brain disease.

"The hospital missed its deadline for implementing the end of life measures," Roger Kiska, legal counsel at Christian Legal Centre which is representing the family, told CBN News. "As a result, Tom and Kate filed a motion to set a new date and of a new hearing."

"The fact that he now has Italian citizenship - this new development, clearly huge, and we hope it will make the difference," he said.

Alfie's parents, Evans and Kate James, have been caught in a legal battle with Alder Hey Children's Hospital in Liverpool which wanted to withdraw life support from Alfie.

CBN News learned that a hearing took place today to determine if the end of life measures in the UK would happen, and if so, when. The court also discussed the issue of Italian citizenship and whether Alfie would be allowed to be transferred to Italy.

However, LifeSiteNews reported that a UK judge did not reverse a prior court decision that the hospital could take Alfie off life support because it was in the toddler's "best interest."

That decision, the news outlet said, was made during a conference call Monday between the legal team representing the family, Justice Hayden, the Italian ambassador and administrators with the hospital.

"It's frivolous to say the least," a source with knowledge told CBN News, referring to the decision by Hayden. "Justice Hayden did the second order, and this is his third time giving the order."

"He said that Alfie's always been a UK citizen; he's always resided in the UK, and so he doesn't see a need to extend the matter for a further hearing to hear the Italians out," the source continued.

"And he thought it was in Alfie's best interest to get this done sooner than later," the source said.

The same source told CBN News that the Christian Legal Centre tried to appeal the ruling, to no avail.

In February, the High Court ruled that whatever was causing Alfie's condition, the damage to the toddler's brain was so severe that it was in his best interest to be taken off life support.

Evans recorded video of Alfie Monday that showed him responsive, blinking and looking around his hospital room.

Pope Francis, whom Evans visited earlier this month asking for help in saving his son's life, Monday called for Alfie to be brought to Rome.

The pope tweeted, "Moved by the prayers and immense solidarity shown little Alfie Evans, I renew my appeal that the suffering of his parents may be heard and that their desire to seek new forms of treatment may be granted."

Moved by the prayers and immense solidarity shown little Alfie Evans, I renew my appeal that the suffering of his parents may be heard and that their desire to seek new forms of treatment may be granted.

Monday morning, Evans used Facebook as a portal to the court of world opinion in a series of several posts and LIVE videos where he's seen running around the hospital.

"They're trying to give him a lethal injection like they give them on death row," Evans said during the Facebook LIVE. "He's alive, his eyes are wide open."

He said the drug in question is Fentanyl, an extremely powerful synthetic opioid.

Not long after his warning post about the injection, Evans shared a release from Italian Minister of Foreign Affairs and International Cooperation Angelino Alfano, and Minister of the Interior Marco Minniti, granting Alfie Italian citizenship in an attempt to move him to Italy where his treatment could continue.

The post reads, "According to a note from the Farnesina, according to which in this way the Italian government hopes that being an Italian citizen will allow the child immediate transfer to Italy."

Evans posted to Facebook, writing, "We are thankful that our lawyer Mr Diamond was able to get the execution temporarily stopped."

The couple had been hoping to take their son to the Vatican's Bambino Gesu pediatric hospital which agreed to continue Alfie's care, but he had previously been denied that option by UK courts.

Videos from Monday morning show protests outside the hospital with people chanting "Alfie" repeatedly, and many commenters joined online with posts pleading for Alfie's life as Evans made known that today is the day officials will end his life.

Evans posted a picture of Alfie awake, writing, "This is Alfie now having cuddle time, how can they do this?"

Over the weekend he made a post directly to "Her Majesty in Parliament."

"To Her Majesty in Parliament: We the undersigned humbly petition Your Majesty for protection of life and liberty of your 23-months-old subject Alfie Evans. The judges in Your Majesty's Courts have given orders:
* to kill Alfie on an appointed hour at Alder Hey Hospital in Liverpool by withdrawing his life support;
* for the day and hour of that killing to be kept secret from the public to avoid any protest or hinderance; and
* for Alfie to be detained in Alder Hey until his death - any attempt to release him to be resisted by force, and punished by imprisonment."