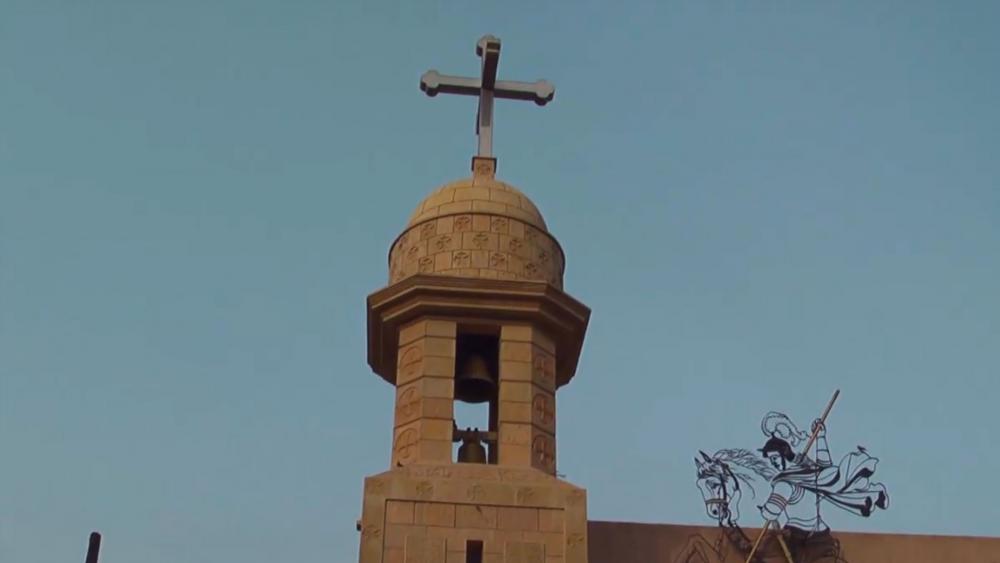 CAIRO (AP) - In a show of solidarity with Egypt's embattled Christians, President Abdel-Fattah el-Sissi Saturday made a symbolic appearance at an Orthodox Christmas Mass in a new cathedral as tens of thousands of soldiers and police deployed outside churches across the country in anticipation of possible attacks by Islamic militants.

"We, with the grace of God, are offering a message of peace and love from here, not just to Egyptians or to the region, but to the entire world," el-Sissi told a jubilant congregation while standing next to Pope Tawadros II, the Coptic pontiff.

"I always say this and repeat it: Destruction, ruin and killing will never be able to defeat goodness, construction, love and peace. It's impossible," said el-Sissi, a Muslim. "Pay attention, you are our family. You are part of us. We are one and no one will ever drive a wedge between us."

In Cairo and across much of the Muslim majority country, soldiers in full combat gear joined the police in protecting churches, most of which are now equipped with metal detectors. Worshippers undergo body searches at church entrances. Some churches have had their surrounding streets sealed off, with sidewalks barricaded to control pedestrian movement.

The tight security across Egypt is a precaution against possible attacks by Islamic militants who have specifically targeted Christians since December 2016, staging a series of bombings, killing about 100 people.

Orthodox Christians are the overwhelming majority of Egypt's Christians, who account for about 10 percent of the population, or nearly 10 million. They celebrate Christmas on Jan. 7.

The new cathedral in which Mass was held has been named Christ's Nativity and is located in Egypt's new Administrative Capital, a 45-billion-dollar, under-construction project some 45 kilometers (28 miles) east of Cairo. The Christmas Mass consecrates the new cathedral and marks the first time in living memory that the liturgy is not held at St. Mark's Cathedral, the seat of the orthodox church in central Cairo.

The new cathedral can house up to 9,000 worshippers and is touted as the largest in the Middle East.

El-Sissi arrived shortly after nightfall, as silver lights twinkled on the cathedral's dome, piercing the surrounding darkness. A general-turned-president, el-Sissi is viewed by most of Egypt's Christians as their protector and ally in the face of Islamists. He led the military's 2013 ouster of an Islamist president whose divisive rule alarmed many Christians fearful over their future in the country.

The cathedral's bells tolled as Tawadros received el-Sissi outside the cathedral and they walked inside together. Women ululated in jubilation and many in the congregation waved Egyptian flags or threw white rosebuds at the smiling president, who waved back and shook hands with some of them.

The consecration of the new cathedral attracted the attention of Pope Francis, the head of the Roman Catholic Church who visited Egypt last year where he spoke of the need for tolerance between Muslims and Christians.

"I'd like to express in a special way my closeness to Orthodox Coptic Christians, and I cordially greet my brother Tawadros II in the glorious occasion of the consecration of the Cathedral of Cairo," Pope Francis said in remarks to the faithful after celebrating an Epiphany Mass Saturday in St. Peter's Basilica.

But not everyone was as positive about the new cathedral or holding Christmas Mass there.

Ishak Ibrahim, a prominent expert on Christian affairs in Egypt, said in a Facebook post that moving Mass to an "isolated" spot projected a "disappointing" message.

"Christianity never commanded us to build churches so we can boast about their size, beauty or to accord legitimacy to the sultan," he wrote. "Those in the villages, meanwhile, are hurt and see their churches ... shuttered," wrote Ibrahim, alluding to frequent instances of Muslim mobs in rural Egypt reacting violently to the construction or repair of churches, or the use of private Christian homes as places of worship.

The latest such incident took place last month, when an angry Muslim mob stormed an unlicensed church in a village south of Cairo, ransacking the facility. Christian rights activists point to such incidents as evidence of the government's inability to protect Christians, particularly outside big cities.

The latest deadly attack against Christians was on Dec. 29, when a militant opened fire outside a suburban Cairo church, killing at least nine people.

A local affiliate of the extremist Islamic State group has claimed responsibility for most attacks on Christians, including a series of killings that forced scores of Christian families last year to flee their homes in northern Sinai, the epicenter of an insurgency spearheaded by IS militants, who also target the country's mainland.