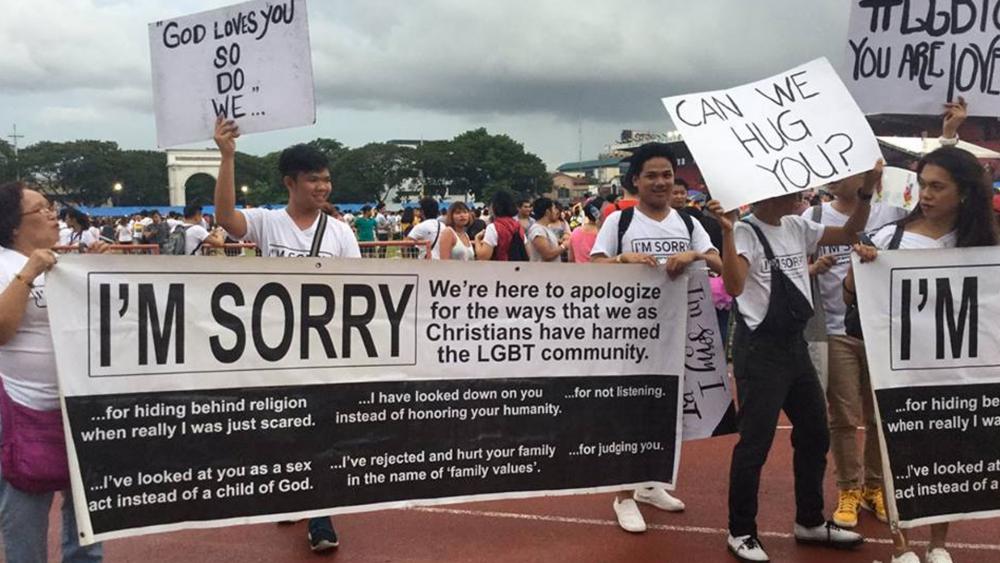 Over the weekend, a group of Christians crashed a gay pride parade in the Philippines with a message of their own.

Members of the Church of Freedom in Christ Ministries gathered at the entrance to the parade and held signs "apologizing" for the way the Church has treated the LGBT community.

Their banner read, "We're here to apologize for the ways that we as Christians have harmed the LGBT Community."

It went on to list the reasons including looking down on gays, rejecting them, judging them and not listening.

Other signs they held up had messages like: "God adores you," "LGBTQ are loved," "God love you, so do we," and "Jesus didn't turn people away neither do we."

One also stated, "Can we hug you?"

CNN reported the demonstration was part of the church's "I'm sorry" campaign, where members seek to apologize on behalf of their fellow Christians who use the Bible against LGBTQ people.

The church's website states they are "an inclusive and LGBT affirming" congregation that welcomes all. Their demonstration at the parade garnered a lot of attention on social media, with many people tweeting positive reactions using the hashtag "RiseUpTogether."

I literally cried when I saw this kanina. Imagine living in a society with nothing but love and respect for each other. #RiseUpTogether pic.twitter.com/rL4rPaWHel

The best thing I have seen for Pride March 2018

I honestly got teary eyed from these people at pride march

As a person who formerly used religion to shame others, we need more of this. #RiseUpTogether pic.twitter.com/uurB0HuoXd