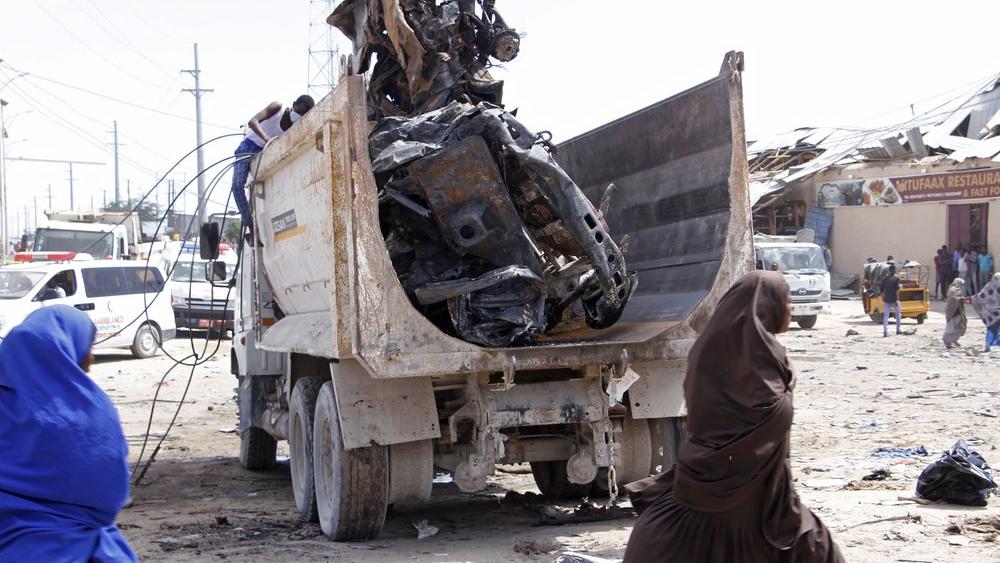 MOGADISHU, Somalia (AP) — A truck bomb exploded at a busy security checkpoint in Somalia’s capital Saturday morning, killing at least 79 people including many students, authorities said. It was the worst attack in Mogadishu since the devastating 2017 bombing that killed hundreds.

The explosion ripped through rush hour as Somalia returned to work after its weekend. At least 125 people were wounded, Aamin Ambulance service director Abdiqadir Abdulrahman said, and hundreds of Mogadishu residents donated blood in response to desperate appeals.

President Mohamed Abdullahi Mohamed condemned the attack as a “heinous act of terror” and blamed the local al-Shabab extremist group, which is linked to al-Qaida and whose reach has extended to deadly attacks on luxury malls and schools in neighboring Kenya.

Bodies lay on the ground amid the blackened skeletons of vehicles. At a hospital, families and friends picked through dozens of the dead, gingerly lifting sheets to peer at faces.

Most of those killed were university students returning to class and police officers, said Somalia’s police chief Gen. Abdi Hassan Hijar. He said the vehicle detonated after police at the checkpoint blocked it from proceeding into the city.

Somalis mourned the deaths of so many young people in a country trying to rebuild itself after decades of conflict. Two Turkish brothers were among the dead, Somalia’s foreign minister said, and Turkish President Recep Tayyip Erdogan condemned the attack.

There was no immediate claim of responsibility, but al-Shabab often carries out such attacks. The extremist group was pushed out of Mogadishu several years ago but continues to target high-profile areas such as checkpoints and hotels in the seaside city.

Al-Shabab is now able to make its own explosives, its “weapon of choice,” United Nations experts monitoring sanctions on Somalia said earlier this year. The group had previously relied on military-grade explosives captured during assaults on an African Union peacekeeping force.

Despite that advance in bomb-making, one security expert said the unlikely choice of target Saturday — a checkpoint at the western entrance to the capital — reflected al-Shabab’s weakening capability to plan and execute attacks at will. Mogadishu recently introduced tougher security measures that Somali officials said make it more difficult to smuggle in explosives.

“It feels like they literally knew that their (car bomb) may not proceed through the checkpoint into the city undetected, considering the additional obstacles ahead, so bombing the busy checkpoint in a show of strength appeared to be an ideal decision,” the Mogadishu-based Ahmed Barre told The Associated Press.

Al-Shabab was blamed for the truck bombing in Mogadishu in October 2017 that killed more than 500 people, but the group never claimed responsibility for the blast that led to widespread public outrage. Some analysts said al-Shabab didn’t dare claim credit as its strategy of trying to sway public opinion by exposing government weakness had badly backfired.

“This explosion is similar like the one ... in 2017. This one occurred just a few steps away from where I am and it knocked me on the ground from its force. I have never seen such a explosion in my entire life,” witness Abdurrahman Yusuf said.

The attack again raises concern about the readiness of Somali forces to take over responsibility for the Horn of Africa country’s security in the coming months from the AU force.

Al-Shabab, the target of a growing number of U.S. airstrikes since President Donald Trump took office, controls parts of Somalia’s southern and central regions. It funds itself with a “taxation” system that experts describe as extortion of businesses and travelers that brings in millions of dollars a year.