'I Had Nightmares': Woman Talks Openly About Regretting Her Abortion on Live BBC Talk Show 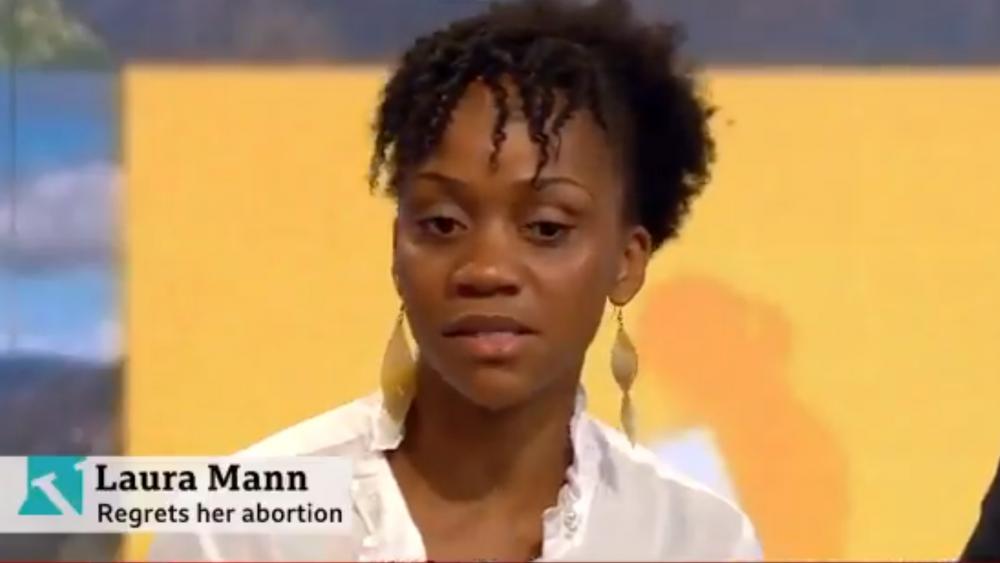 A talkshow on the BBC has featured a woman who candidly opened up about her regret over having an abortion.

The woman, Laura Mann, was just 19-years-old when she decided to have a termination, talked bravely about her experience on an episode of The Victoria Derbyshire Show — a news and current affairs program.

Mann, who aborted her child at 21 weeks, said she “wasn’t well informed” about the procedure and how it would be carried out. She also felt under pressure from clinic staff and was under the impression that there were no other options available to her.

“I questioned month-after-month – had nightmares – what happened to this baby’s body?”

“When I went into to discuss that I am pregnant the first option I was given, was abortion,” she said. “We stepped out of the room, we spoke for 5 minutes went back in, and I was so afraid, so confused. I had no clue what to do.”

“The first thing that went through my mind was ‘Where’s my baby? What’s happened to the body of my baby?’ And I kept asking myself that question,” she added.

In a statement issued in response to Mann’s compelling story, Clare McCarthy of Right To Life UK noted that her experience was “all too familiar” among young women.

“She is right to ask why is it that what actually happens in an abortion is kept such a secret. She is right to feel let down by [the abortion provider group] Marie Stopes who did not fully inform her about what would happen to her baby,” McCarthy added.

The actions and words of those administering these horrifying procedures have come under increased scrutiny in recent years, with some ghastly results.

According to the report, Marie Stopes employees were applying pressure on mothers to abort their babies due to their being a financial “bonus” incentives for those able to convince women to undergo abortion procedures.

“One section of the report revealed that clinic staff were being paid financial bonuses for encouraging women to undergo abortions. After the damning report was released, one woman came forward claiming that her experience with the abortion chain was in line with the report’s findings. She said: “I saw several nurses and explained my situation. I felt like they wanted me to have an abortion. The place was chock-a block with people. It was like a conveyer belt. When I told them I didn’t want the abortion they accused me of wasting their time. I was ushered out of the door half-dressed and in tears.”

“The scandalous reality behind the veneer of choice, is that pregnant women are increasingly exploited and pressured into abortion,” Robinson added. “Recent research by the UK charity, Abortion Recovery Care and Helpline (ARCH) has found that 75% of female clients state that they had an abortion because they had felt pressure from a loved one. Whilst pressure and coercion can come from a variety of sources, intimate partners are the main culprit.”

Woman Who Had Nine Abortions Sees Last Baby: 'She was absolutely hysterical'

Regret Taking an Abortion Pill? You Can Reverse It, but States Are Debating if Doctors Should Tell You
CBN News Email Updates