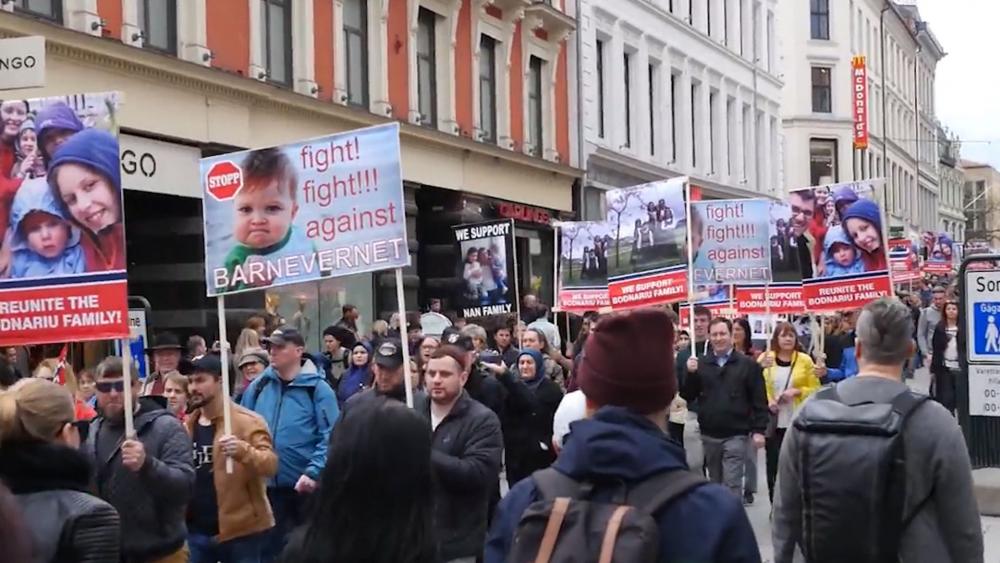 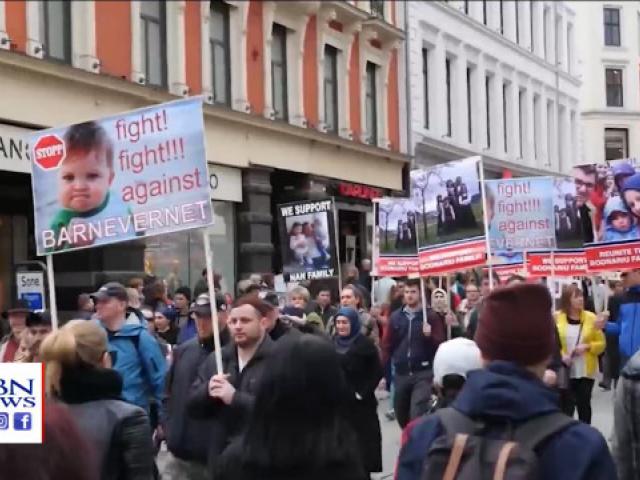 One of the first things you notice about Norway when you visit is how beautiful it is. But there is a very dark side of Norway that most of the world knows nothing about. It's called Barnevernet, and it can be as cold and brutal as the Norwegian winter.

After moving to Norway from Atlanta for her husband's employment, American mother Natalya Shutakova's three American-born children were taken by Barnevernet two months ago for alleged child mistreatment.

Shutakova and her Lithuanian husband were jailed for 24 hours and told they could get two years in prison for discussing the case. They're waiting to hear if they will lose custody of their children for good. All three are American citizens.

Foreigners living in Norway seem especially at risk of having their children taken by Barnevernet.

Video on YouTube shows police tackling Kai Kristiansen outside his home while his mother films it and pleads, "Would someone please help us. Barnevernet is here in our home and they're trying to take our son. I'm Canadian."

Barnvernet moved in after the Kristiansens started homeschooling Kai because he received death threats at school.

It was Barnevernet that took the five children from Romanian and Norwegian parents Marius and Ruth Bodnariu in 2016.

Barnevernet claimed the reason was that the parents were spanking. But an investigation revealed the real reason was officials believed the children were being 'indoctrinated' into Christianity by their parents. Worldwide outrage forced the Norwegian government to return the children. The Bodariu's escaped from Norway and have filed suit before the European Court of Human Rights.

The government of Norway has in the past defended the work of Barnevernet against what it called "wild accusations." But if there's not a problem, why does a nation of only five million people have 26 cases pending before the European Court of Human Rights, and 17 of the last 18?

Observers say that's a staggering number of child welfare cases for one of the smallest nations in Europe.

"There are 26 cases in total at this stage and will probably rise to 30 by within a few months," says Marius Reikerås, a Norwegian human rights council before the European Court of Human Rights.

Reikerås told us, "There is something severely wrong going on in Norway that you are taking children out of the well-working families. We're not talking about child abuse and we are not talking about alcoholism or drug abuse. We are talking about, in general, about normal families that have all the capabilities to provide good care for their children." Einar Salvesen, a Norwegian psychologist who has been an expert witness in Barnevernet court cases since 1995, says Barnevernet needs to shut down immediately.

"You need to close down all the offices," Salvesen old us. "It's 400 offices. It has become a system of evil in too many cases much more and more cases than we want."

In 2013, Barnevernet took American citizen Amy Jakobsen Bjørnevåg's one-and half-year-old son Tyler because he was one pound underweight. She phoned the Obama White House pleading for help. But she got no help. six years later, her son Tyler has been passed from foster home to foster home and has had his name changed at least twice. And Amy alleges that he has been tortured.

"We do have paperwork that says that he was tied to the bed because he kept standing up in his crib calling for "mommy," Bjørnevåg told us. "It isn't enough that he's been calling for you. And they completely ignore it. And they do everything to make him stop calling so they cut all contact. That's their solution instead of working with families."

Czech Member of the European Parliament Tomáš Zdechovský has battled Barnevernet, and he calls it a "monster."

Reikerås believes Barnevernet has not been reigned in because this is about a lot of money, and he's not afraid to call it "child trafficking."

"Because we see that billions and billions of dollars are being put into this system each year,' Reikerås says. "And, of course, a lot of people are profiting big time from this governmental pot that you can see. So, saying that this is a form of child trafficking? Absolutely. My opinion is yes."

We presented these charges to Norway's Ministry of Children and Families and it told us that Barnevernet is in the process of being reformed for the, "…strengthening of legal safeguards for both children and their parents."

But it's unclear whether Norway is serious about reform. It expelled a Polish diplomat this year for trying to defend Polish families in Norway from Barnevernet.

The U.S. government has so far done nothing about attacks against American families by the Norwegian government.

Amy continues to lose in court and wonders if she will ever regain custody of her son.

"I would do anything to hold him in my arms at least one time, for him to have some sort of sense of where he comes from and his background and his family, that there is a whole family that loves him and misses him."

Response from Norwegian State Secretary Jorunn Hallaråker at the Ministry of Children and Families to CBN News: