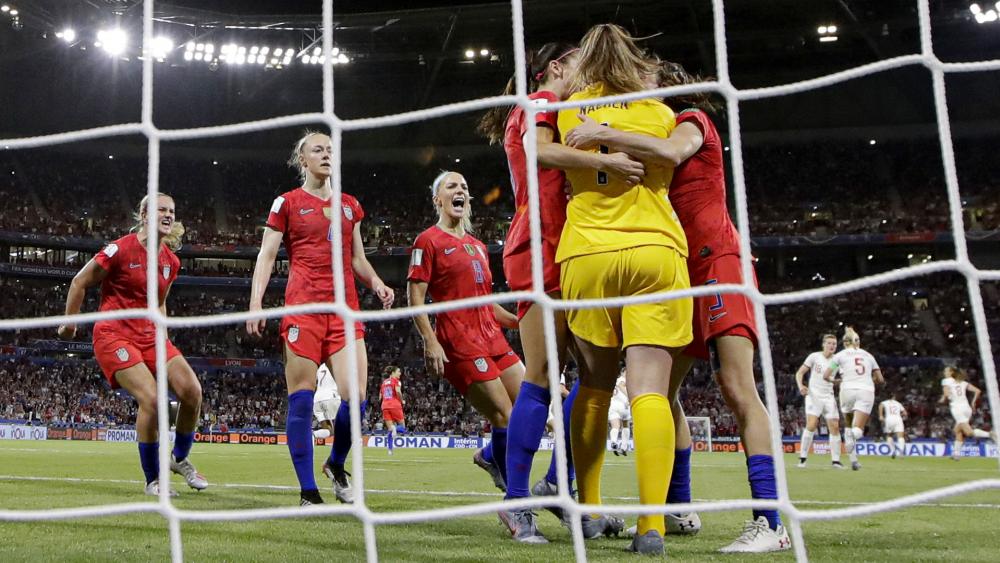 The US women's national soccer team is heading for its third straight World Cup Championship after defeating England 2 to 1 in Tuesday's semifinal in Lyon, France.

Then Alex Morgan put the US ahead for good with the go-ahead goal. After her goal, Morgan pantomimed a sip of tea on the field.

"I feel like this team just has had so much thrown at us, and I felt that we didn't take the easy route to the final this tournament, and that's the tea," she said.

Late in the game, England was given a penalty shot when it was determined Becky Sauerbrunn had fouled Ellen White in the penalty area.

England captain Steph Houghton's penalty shot was stopped by a diving US goalkeeper Alyssa Naeher in the 84th minute.

It was the first penalty kick saved by a U.S. goalkeeper in regular time at the World Cup.

At the final whistle, the team mobbed Naeher in front of the goal in celebration.

The mild-mannered goalkeeper was asked afterward if it was the biggest save of her life. "Probably up there, yeah," she said smiling.

"It's a special team and everybody fought hard tonight for all 90 minutes. Players on the field, players on the bench, ready to come in and make differences," Naeher said. "Obviously Christen coming in and starting tonight and scoring a great goal was huge for us. And I think it's just a testament to the team."

The top-ranked US is the defending world champion. They'll play the winner of the Sweden - Netherlands game for this year's title on Sunday.

The Americans have been to the semifinals of all eight World Cups, and they've won the trophy three times, more than any nation. The U.S. team's lone loss in a World Cup title match came to Japan in 2011.